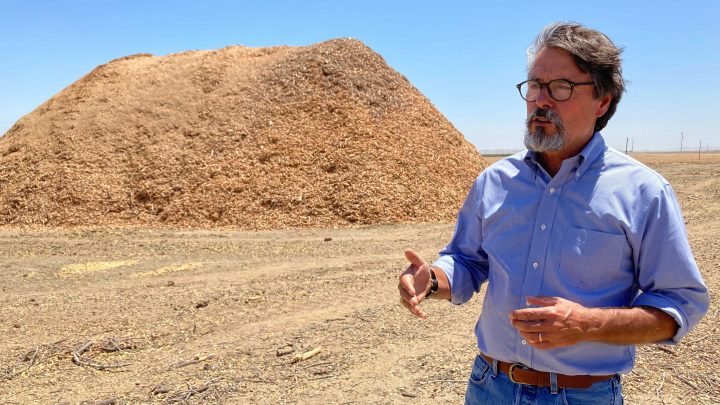 COPY
Stuart Woolf stands near piles of almond tree wood chips that will get spread out on his ranch. Caroline Champlin

Stuart Woolf stands near piles of almond tree wood chips that will get spread out on his ranch. Caroline Champlin
Listen Now

When Stuart Woolf was growing up on his dad’s ranch in Huron, California, he never liked working the tomato harvest.

“I thought, ‘I am never going to do this.’ Everything was kind of wet, hot and stinky,” Woolf said.

These days, though, now as president of the 20,000-acre ranch, Woolf is prioritizing tomatoes over some of his other crops, like cotton and almonds, since they’re relatively less water-intensive.

With the drought desiccating California’s Central Valley, farmers like Woolf are having to reevaluate their business models based on how much water they can afford.

Besides growing tomatoes, Woolf also oversees a processing plant that turns them into an annual 350 million pounds of tomato paste. Inside the factory, the smell is sharp, like tomato stems, plus a faint hint of farm animals. Everywhere you look there are tanks, pipes and flumes. To Woolf, the water is precious.

“All the water in the plant ends up eventually going into the ranch,” Woolf said. “We’re collecting water from all over the place.”

Red streams of tomato-tinged water run into an underground pool. Then they get pumped back into the fields, soaking the ground for a future crop.

Kelsey Caratachea is a lab assistant at the plant who wears a white coat and looks more scientist than farmer. Her job is to check if the factory is extracting the most water out of the tomatoes as possible.

She works with samples of ground-up tomato skin and seeds — what’s called pomace. These grainy tomato bits will just end up in dog food, but water left in is money lost.

“My results, I take them to the control room, and they make adjustments over there,” Caratachea said.

With the drought this year, Woolf’s access to extra water from other farmers has dried up. His tomatoes are relatively cheap waterwise, but his almonds are much more demanding.

On the drive over to see Woolf’s orchards, he passed a neighbor’s grove of dry and yellow trees. “These are almond trees that the guy cut the water on, and you can see they’re dying,” Woolf said. “That will be a total loss.”

This year, Woolf looked at extra water costs for 400 acres of his almonds and estimated the patch would have cost him over $1 million. So he cut his losses, grinding up the relatively young trees and mixing them back into the soil for carbon credits.

“When you go out and you plant these trees … it’s like your kids,” Woolf said. “Then to come out and prematurely yank them out and put them in piles and watch them get ground up. It’s a bummer.”

He drove over the remains, just wood chips and some tiny immature almonds left. Woolf is still growing around 2,000 other almond trees on this property, but with water costs, he’s considering an orchard removal business for other farmers looking to scale down.

There are a lot of them because the demand for almonds and the number of producers have grown quickly over the last few decades, according to University of California, Davis, agricultural economist Dan Sumner.

“’Money grows on trees’ was the saying around here,” Sumner said.

Sumner expects that other farmers may wait and see before taking out their trees. “If California has fewer acres of almonds, maybe I want to keep mine because the price will be higher,” he said.

What growers decide to do on a big scale remains to be seen. But to Sumner, this drought has marked a turning point for farmers.

Farmers may plant other crops, like tomatoes, in the place of almonds. If droughts do become more frequent and more severe, Sumner believes the days when money grew on trees will be over.