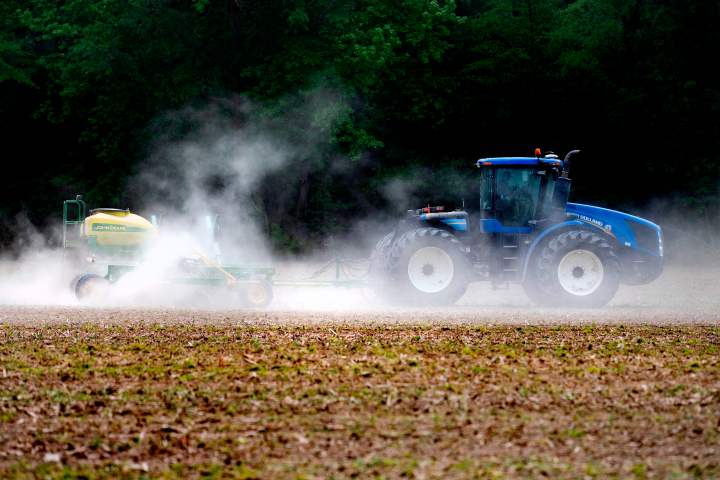 Two regions dominate U.S. agriculture — California’s Central Valley and the former prairielands of the Midwest. In both places, the massive scale of industrial farming is accelerating an alarming ecological decline. In his new book, journalist and former farmer Tom Philpott examines ways to make farming more sustainable for years to come. The following is an excerpt from “Perilous Bounty: The Looming Collapse of American Farming and How We Can Prevent It.” Click the audio player above to hear Philpott’s conversation with Kai Ryssdal.

Salad greens love an autumn chill. It concentrates their flavor, making them peppery but also sweet. And cold weather beats back the insect pests that besiege these tender leaves in warm months.

To cut delicate greens on frosty mornings, you can wear gloves, but for dexterity’s sake, they have to be the kind that leaves the fingers bare. Each day when you start out, your fingers take on a stinging chill. We had a joke at the small organic farm in the Appalachian Mountains of western North Carolina where I worked in the early 2000s: when the pain has finally eased because your fingers have gone completely numb, you know you’re halfway through the morning’s harvest.

The daily ache was worth it. The farm cultivated broccoli, chard, beets, potatoes, squash, green beans, and more; but fall salad greens were the crown jewel. Spinach, young kale, arugula, and a variety of spicy mustards were its lifeblood, its claim to fame. You don’t have to take my word for it. After a visit in 2005, the food writer Jim Leff, founder of the website Chowhound, called them “hallucinogenic in their intensity and persistence of flavor; coated with a dab of oil and vinegar, they steal every meal they accompany.”

My years on the farm were a crash course in some of the challenges and paradoxes facing U.S. agriculture, and those prize salad greens figured in one memorable lesson.

One chilly afternoon, late in fall 2006, I was in the farmhouse calling restaurant chefs to take their delivery orders, a key part of our business. I reached the chef of a much-loved local restaurant, a reliable customer. On our call, he ordered his usual amounts of other fall goods: garlic, beets, mature chard. The conversation turned to salad greens, which he had been buying from us in large quantities for years. This time, he stopped short: “I hate to ask, but can you go down on price?” He explained that his food distributor had just begun offering organic salad greens shipped from California. “They’re pretty good quality. Not nearly as good as yours, but not bad either—and they’re less than half the price.”

I thought for a second. I didn’t feel like telling him what trouble it was to cut the greens he had been buying, or that we relied on the price we had established to get through the winter and buy the spring’s seeds. I simply explained that fall greens were our prized crop, and we couldn’t go down on price. He bought a few bags—a fraction of his usual order, for use on the nightly special, he said.

Not long after, such haggling became the norm among most of our restaurant customers for nearly everything we grew. I didn’t know it at the time, but that chef was gently informing me that “not bad” organic vegetables grown in California had emerged as the price setter for produce among our area’s farms.

Of course, at that time, California fruits and vegetables already dominated our area’s supermarkets, as they did supermarkets throughout the country. For midsize, nonorganic farms across the nation, the “California price” has long served as a price ceiling. The downward pressure of that price, in turn, made each acre of farmland less profitable, forcing growers to strive to get bigger or exit the business. But the California agricultural behemoth was even big-footing its way into the relationship between a niche organic mountain farm and its restaurant market. The long-fomenting revolt against industrially produced food was beginning to consume its own.

That same year, Michael Pollan published his landmark The Omnivore’s Dilemma, which further galvanized awareness of our food system’s depredations. Sales of organic food were booming; farmers markets were multiplying across the country. Even amid this surge in desire to “know where your food comes from,” California’s massive farms were intensifying their grip on U.S. food production. California organic was squeezing local organic.

According to conventional economics, our plight reflected the invisible hand of the market slapping down inefficient producers in favor of ones who can do a better job of growing vegetables. The principle of comparative advantage, which has been with us since the nineteenth century, holds that each region should generate a surplus of stuff it can produce most cheaply and trade those excess goods for the specialized products of other regions. “The case for specialization is perhaps nowhere stronger than in agriculture, where the costs of production depend on natural resource endowments, such as temperature, rainfall, and sunlight, as well as soil quality, pest infestations, and land costs,” the Duke University economist Steven Sexton argued in a 2011 piece for the Freakonomics website.

Sexton went on to cite California’s farm regions, with their “mild winters, warm summers, and fertile soils,” as a prime example of comparative advantage in action. Sexton pointed approvingly to the state’s dominance of the American supermarket produce aisle and warned consumers against supporting local efforts to challenge it, which would only “raise the cost of food by constraining the efficient allocation of resources.”

Sexton couldn’t have known it then, but that very year, California had entered what would turn out to be its most severe drought in at least five hundred years. In a sense, the succession of dry years vindicated the claim that California should be our dominant vegetable and fruit producer. Through its long, parched stretch, the California agriculture juggernaut lurched forward. The long drought caused dry wells, poisoned water, and other massive hardships for the people who toil in the state’s blazing-hot agricultural valleys. But they caused barely a blip for most U.S. consumers, who encountered the same reliable bounty in their supermarkets. In 2010, the year before the epic drought, California farms churned out $20.7 billion worth of fruits, vegetables, and nuts, about 53 percent of the U.S. total. In 2015, at the drought’s height, output had actually risen to $28.6 billion, accounting for 57 percent of all such U.S. output.

For most Americans, it’s easy to ignore the Central Valley, even though it’s as important to eaters as Hollywood is to moviegoers or Silicon Valley is to smartphone users. Occupying less than 1 percent of U.S. farmland, the Central Valley churns out a quarter of the nation’s food, predominantly fruit, vegetables, and nuts.

This apparent triumph of comparative advantage is like the sight of water in a sunbaked desert: a mirage, and a dangerous one for U.S. eaters.

While California is the undisputed top supplier of our fruits and vegetables, another region, the Midwest, occupies a similar position for the foodstuff that takes the central position on the U.S. dinner plate: meat. The Midwest’s store of rich, black, prairie-derived topsoil places the region among the globe’s great breadbaskets. Its farms supply the bulk of corn and soybeans that provide the feed for the United States’ highly industrialized meat sector. Just as you’ll find loads of California vegetables in Des Moines all summer, meat cases from San Diego to San Francisco are stuffed with cuts from animals fattened on Iowa corn. The corn and soybeans grown there also course through the processed- and fast-food industries, providing the bulk of the fat and much of the sweetener that makes prefab food palatable.

In short, the United States has two dominant food-producing regions—California’s Central Valley and the former prairielands of the Midwest—and both are in a state of palpable and accelerating ecological decline. At the moment, the effects are mostly felt by the workers who make the farms, groves, and feedlots hum, and who are subjected to increasingly tough conditions; in addition to the baseline rigors of their jobs, they endure fouled water, putrid air, and the decay of public services that accompany a declining population. But while their plight is easy for many Americans to ignore, there’s something else afoot in these regions that will affect every U.S. resident who eats: to grow our food, the agribusiness interests that dominate the Central Valley and the Corn Belt are also actively consuming the ecological foundations that support agriculture itself.

Adapted from “Perilous Bounty: The Looming Collapse of American Farming and How We Can Prevent It” by Tom Philpott, copyright © 2020. Published by Bloomsbury USA.