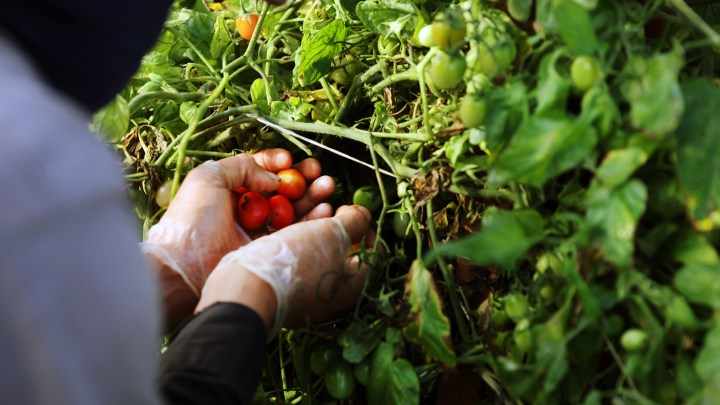 COPY
The drought in California may reduce the state's tomato yield as much as 10%, frustrating businesses along the supply chain as well as consumers. Spencer Platt via Getty Images

The drought in California may reduce the state's tomato yield as much as 10%, frustrating businesses along the supply chain as well as consumers. Spencer Platt via Getty Images
Listen Now

It’s been a rough year for ketchup. Remember a few months back when folks were selling Heinz packets on eBay for $4 a pop because of a pandemic-induced shortage?

Those ketchup packets may turn out to be a resilient asset class.

The massive drought in California — the country’s biggest tomato producer — will make tomato yields short by about 5% to 10%. This means the price of everything from marinara sauce and salsa to, yes, ketchup, could be on the rise.

A third of the world’s canned tomatoes are grown in California’s Central Valley, including many by Bruce Rominger.

“Our harvester, I’m watching it go back and forth in the field right now,” said Rominger, who grows processing tomatoes — the kind that end up in cans.

Fresh tomatoes are also in short supply, but processing tomatoes are taking the biggest drought hit. Instead of using scarce surface water, farmers are switching to well water, which isn’t great because “the higher salt content will diminish the yield in the field,” Rominger said.

It’s not just the drought. Rominger is now getting $85 a ton for tomatoes. But in years past, he said, the price canneries were offering simply wasn’t enough.

“We’ve seen more and more land taken out of tomato production into orchards, primarily almonds and pistachios,” he said.

Andy Russick is the head of marketing at the Sacramento-area cannery Pacific Coast Producers, which makes stewed tomatoes, tomato paste and other storable items. He said rising tin and freight costs are also sending prices up.

“Which is unfortunate because we have this willing consumer base that just learned from a year of the pandemic how important canned tomatoes are,” Russick said.

Those consumers include restaurants, like Mulvaney’s B&L in Sacramento. Patrick Mulvaney, the owner and head chef, relies on fresh tomatoes in the summer.

In the winter, however, “when tomatoes in cans are your option, then it becomes time for heartier sauces, deep, rich ragouts with lamb shanks,” he said.

The shortage could have a big impact on the dishes he makes.

“You’re using it just to put a dab of flavor in, rather than having it be the star of the show,” Mulvaney said.