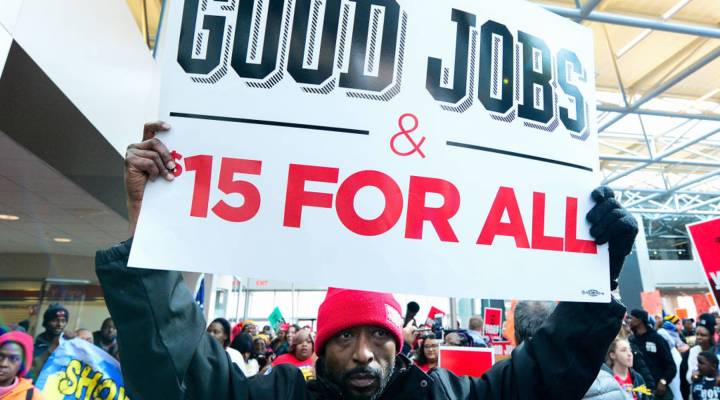 Republicans have long argued that there is no need for a federal minimum wage and that states should be the ones setting the wages for their workers. During his presidential campaign, Trump said that while he does not know how people survive on $7.25 an hour, he wants states to decide what their minimum wage is because “states have to compete with each other.”

While the last increase took place during President Barack Obama’s first term, the increase was part of legislation passed under President George W. Bush. Obama was the third president to not increase the federal minimum wage since it was established in 1938. The other two presidents were Gerald Ford and Ronald Reagan.

Months before Obama’s second term was up, then Labor Secretary Tom Perez said that Republicans were to blame for the lack of minimum wage increases during Obama’s two terms.

“They are so hellbent on making sure they never deliver a legislative victory to this president, and if they hurt their own constituents, so be it,” Perez said at the time.

Do we really need a federal minimum wage?

One of the reasons that Democrats, labor unions and worker rights activists push for keeping and increasing the federal minimum wage is because it sets a floor that cannot be crossed — especially during times of economic downturn when employers are likely to reduce wages.

“Over the long term when you go an extended period without raising the minimum wage — unless the market is doing reasonably well — you’ll either have wage stagnation where wages are just kind of remaining flat or they can start to decline in real terms as they did throughout much of the early years of Obama’s presidency,” said David Cooper, senior economic analyst at the Economic Policy Institute. “Or you can run into the situation where if there’s some crisis and there is a recession and people start getting laid off. Then wages can really start to drop if there’s nothing there to catch them.”

Another reasons why some push for a higher minimum wage is because it can drive up wages for other workers as well.

“Minimum wage plays a role in how employers set the wages of roughly the bottom 20 percent of the workforce,” Cooper said.

When pressed by Chuck Todd about whether there needs to be a national floor, Trump said: “No, I’d rather have the states go out and do what they have to do.”

If the federal minimum wage were to be eliminated today, workers in two states — Wyoming and Georgia — would see their wages drop to $5.15 an hour. Another five states — Louisiana, Mississippi, Alabama, Tennessee and South Carolina — do not have a state minimum wage to begin with.

With a tight labor market where the unemployment rate is 4.1 percent and employers are competing for workers, companies are raising wages in an effort to attract the most qualified employees and so the elimination of a federal minimum wage might have little impact. However, come the next recession, those same companies could then reduce their wages below $7.25 if there is no federal minimum wage to stop them.