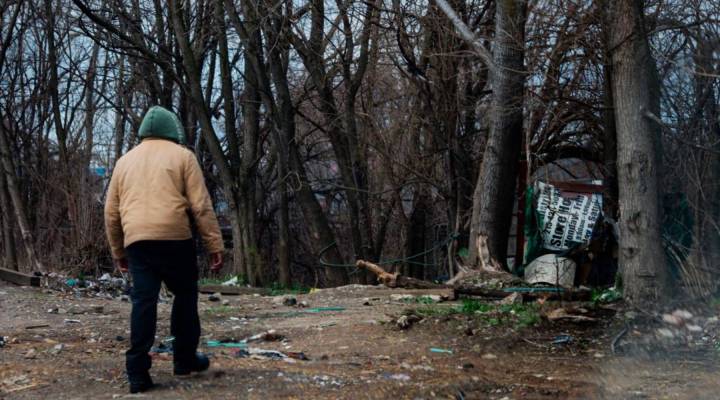 COPY
A man walks into a heroin encampment in the Kensington neighborhood of Philadelphia, Pennsylvania. DOMINICK REUTER/AFP/Getty Images

A man walks into a heroin encampment in the Kensington neighborhood of Philadelphia, Pennsylvania. DOMINICK REUTER/AFP/Getty Images
Listen Now

A federal policy that began almost a century ago is still harming Philadelphia. Beginning in the 1930s, the federal government encouraged mortgage lenders to withhold credit from areas where people of color or immigrant communities lived — a process that became known as “redlining.” While the government eventually passed a measure to get rid of the practice in the 1960s, its effects still linger.

The publications Next City and PlanPhilly looked at how areas redlined back in the 1930s are doing today. Ariella Cohen, the managing editor of PlanPhilly and the former editor in chief of Next City, stopped by to discuss the findings. Below is an edited transcript.

David Brancaccio: Isn’t it striking when you look at the original designations of the 1930s and ’40s, they decided certain neighborhoods were “dangerous.” That’s what they called them.

Ariella Cohen: Yeah, they did. And the criteria was pretty subjective. They had these appraisers who had come from the private real estate industry go and just basically walk around neighborhoods and say “oh you know this looks kind of sketchy,” essentially. They thought that density was bad. They thought proximity to any kind of manufacturing was negative. And again if there was a presence of blacks, immigrants, even Italians, Jews, other ethnic whites, certainly people of Hispanic or Asian backgrounds — that was a ding against you.

Brancaccio: So this notion of redlining was official policy in the ’30s, ’40s, ’50s and beyond. But it was then outlawed. Your team examined a city today, and you could still perceive the outlines of these old putative boundaries?

Cohen: Absolutely. So we took the 1934 redlining map created by the Home Owners Loan Corporation and overlaid it with a contemporary map of Philadelphia, and looked at the Census Bureau data from 2015 in those areas, and you could still see how areas that were redlined back in the ’30s continue to be high poverty areas and continue to be neighborhoods that are segregated.

Brancaccio: This challenges the narrative that the Fair Housing Act gets passed in 1968 and we wipe away the redlining and things improved. You’re saying not necessarily.

Cohen: You know, these neighborhoods were systematically starved of investment. So the federal government and the real estate industry had policies that made it harder for people to get access to credit, access to equity, build the infrastructure, build houses there, and then as those areas became lower and lower in value because of the lack of investment, in the ’30s, ’40s and ’50s, people left.

Brancaccio: What’s your sense, Ariella — I mean, you looked at Philadelphia, but you think the pattern would be repeated if you looked at other cities?

Cohen: Absolutely. And other researchers have looked at cities like Chicago and found very similar patterns. I think that this was a national system, it was a federal policy and with national actors in the real estate industry, so I think cities were pretty universally challenged by it.