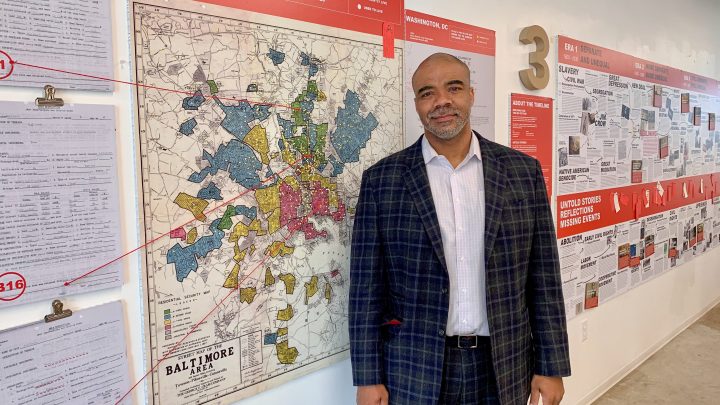 COPY
Nathan Connolly, a professor of history at Johns Hopkins University, stands in front of the Undesign the Redline exhibit at Impact Hub Baltimore. Amy Scott/Marketplace

One thing we know for certain about the COVID-19 crisis is that the pain will not be shared equally. Wealth can determine everything from the quality of healthcare people can access to how well they can ride out a job loss. And inequality is baked into the system.

The average white household today has nearly ten times the wealth of a black household. And one reason for that goes back almost a century to the practice of redlining, restricting lending in certain neighborhoods based on race.

Redlining has been illegal for decades, but an exhibit traveling around the country aims to show how that policy continues to shape our economy today. It’s called Undesign the Redline.

On a recent morning before social distancing measures took effect, Nathan Connolly visited the exhibit at Impact Hub Baltimore, a social justice-oriented co-working space and incubator. Connolly is a history professor at Johns Hopkins University and an expert on race and capitalism. As young people chatted over coffee and worked on their laptops, Connolly stood examining an old street map of Baltimore.

The map was created in 1937 by the Home Owners Loan Corporation, a federal agency set up as part of the New Deal to refinance mortgages at risk of default and foreclosure because of the Great Depression.

“It illustrates what real estate assessors in the Baltimore area, with the backing of federal officials, considered to be the riskiest and safest investments in real estate in the city of Baltimore in that time period,” Connolly explained.

Areas colored green were considered the safest places to invest, followed by blue, then yellow. Areas in red were considered the riskiest, based on things like the age and quality of the housing stock, people’s occupations and the racial makeup of the neighborhood. The exhibit includes a copy of the form assessors used.

“There’s a separate entry, kind of an up or down, yes or no, on every single area description form, 5-D, that just says ‘Negro, yes or no,’” Connolly said. “The answer to that question would determine, oftentimes, what a neighborhood’s value would be.”

By the 1930s, Baltimore was already heavily segregated because of racist zoning laws and neighborhood covenants. On the map, most of the inner city near the industrial harbor was colored red, with large sections of blue and green spreading into the suburbs. That red line was used first to determine who could get mortgage relief and stay in their homes, Connolly said, and eventually who could get new mortgages.

“The combination of rapid defaults and the refusal to issue new mortgages is what created a pretty sharp asymmetry between areas that were considered to be good for single-family home occupancy and those that were really primed for predatory forms of rental entrepreneurship,” he said.

That last part is important, Connolly said, because people often assume that redlining kept investors away. In fact, speculators piled in, buying up homes and charging inflated rents to families they knew had few options.

“So there was a lot of capital dumped into so-called red areas, but in ways that was about harvesting the highest returns on rental investment,” he said.

Redlining was eventually outlawed by the 1968 Fair Housing Act, but its legacy is still with us. And not just in Baltimore.

“There were 239 maps made,” said Braden Crooks, one of the creators of Undesign the Redline. “It was really ubiquitous across the country.”

A timeline in the exhibit shows how those maps paved the way for urban decay and white flight in the 1960s and ’70s, mass incarceration in the ’80s and ’90s, the foreclosure crisis of the 2000s and the gentrification of today — and how all of that has prevented African American communities from building generational wealth.

“The exhibit unpacks the policy history of how we designed structural racism and inequality into cities and places and policies, in ways that it really has never been undone,” Crooks said.

The exhibit has appeared in New York, Des Moines, Dallas, Los Angeles and dozens of other cities where the official lines have disappeared but the racial and economic divisions remain. It’s been used in campaigns for anti-discrimination legislation and affordable housing, which is becoming even more of a crisis because of the coronavirus pandemic.

At Impact Hub Baltimore, the exhibit is a backdrop for the work social entrepreneurs like Candace Chance are doing to build a new legacy. In her neighborhood in West Baltimore, empty storefronts and hollowed out rowhouses still mar the landscape.

“And that is indicative of some of the pervasive residue of redlining,” she said.

But there are also freshly painted storefronts and affordable condos under construction. Chance is working with a black-owned development company that’s bought several vacant buildings with a plan to create jobs and sustainable home ownership in West Baltimore.

“Because redlining was an intentional design, we have to intentionally un-design that, through how we look at working with other folks who have the same mindset,” Chance said.

The idea is to build wealth within the community, not extract it.