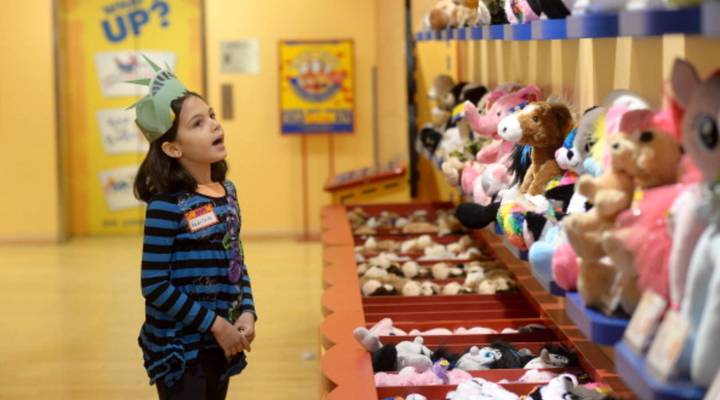 When Sharon Price John took over as CEO of Build-A-Bear Workshop in 2013, the franchise was struggling. Four holiday retail seasons later, the stores are still with us, despite the problems plaguing shopping malls where many Build-A-Bear stores are located. So how does a build-your-own-stuffed-animal franchise stay above water in an increasingly-digital age?

According to Price John, no matter how digital we may get, kids are always going to need a bear to keep away the monsters at night.

Marketplace host Kai Ryssdal sat down with Price John to discuss the do-it-yourself toy business. Ryssdal started out by asking Price John what makes Build-A-Bear stand out in this risky retail landscape? The following is an edited transcript of their conversation.

Sharon Price John: I think the thing that makes it really special is that kids feel creative, and empowered, and there’s no wrong answer in a Build-A-Bear. And then you walk away with a very, very, special furry friend that you made yourself.

Kai Ryssdal: And Mom and Dad pay the bill.

Price John: Yes. Yes they do. But Mom and Dad also sometimes make their own furry friends.

Ryssdal: Do they really?

Price John: Over 25 percent of our sales are to people over 12 years old.

Price John: Yeah. And some of that’s because we have such a wide array of best-in-class licenses, like “Star Wars” and “My Little Pony,” that also has a big following from people as old as you and I.

Ryssdal: I got in such trouble once for mocking “My Little Pony,” so I will not do that. I will ask you, though, I guess, why you took this job. Because when you did four or five-ish years ago, this company was in some trouble.

Ryssdal: Which, in layman’s terms, is a terrible, terrible thing for retail.

Price John: That’s a bad thing for retail. And it also had seen some contracting profitability. Now a lot of retailers had seen some struggles post the 2008 recession. Some tough decisions needed to be made. And those are the decisions that we made. We closed some stores, we squeezed down our S, G and A —

Ryssdal: Got it. Costs. Everything’s got its lingo.

Price John: Yeah, so, and got focused on, first delivering and returning to profitability, then assuring that we sustained that profitability while rebuilding a lot of the key infrastructure. It’s tough sometimes to do both of those things simultaneously. But we were able to do it because the one thing Build-A-Bear really did have was a very strong balance sheet, no debt and good cash flow. So, back to your question, why did I come? I didn’t come because, “Oh my goodness, the turnaround, how much fun!”

Ryssdal: Said any CEO ever.

Price John: I came because it had this strong balance sheet combined with this powerful, in my opinion, unscathed, unmonetized brand that certainly felt like that there was a lot of opportunity there if we were able to get the basics and the fundamentals of the business humming again. Which we now have done.

Ryssdal: Talk to me about toys in 2017. Is this a good time to be in the toy business, or meh?

Price John: I think that if you look at it in its most narrow context, you might say it’s not the greatest time to be in the toy business because it’s evolving in many ways. But I think you have to restructure the argument. It’s not about being in the toy business. I don’t think I’m in the toy business. Do we make toys? Yes. That’s different. I’m in the memory-making business. I’m in the engagement business. I get to stretch this brand in a lot of different ways. People will always be looking for ways to entertain themselves or for a diversion, and toys fit in that space. The big mashup between toys and entertainment and engagement, that’s what’s out there right now. How do you interface with consumers in a different way?

Ryssdal: Do you worry? I suppose you do, because it’s kind of your job. How much do you worry, I guess, then, is a better question, about having your product be a tangible thing, right, in an era where kids have their noses in phones and iPads and all sorts of not-tangible things?