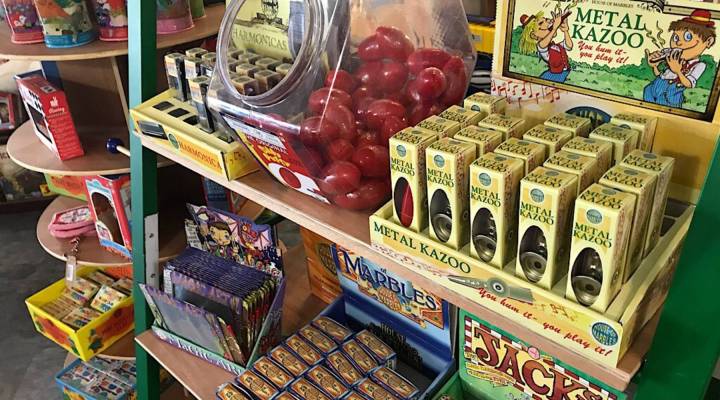 COPY
“This is a classic toy store — the kind of toys and games you remember from your childhood,” says Christine Johnson, owner of the Miracle Mile Toy Hall in Los Angeles. Sean McHenry/Marketplace

“This is a classic toy store — the kind of toys and games you remember from your childhood,” says Christine Johnson, owner of the Miracle Mile Toy Hall in Los Angeles. Sean McHenry/Marketplace
Listen Now

At the Miracle Mile Toy Hall in Los Angeles, you won’t find row after row of Barbies or “Star Wars” playsets. Instead, there are giant stuffed animals and a section filled with chidlren’s books. A knee-high castle, with a dragon nearby. A nook filled with board games. When one customer purchases a game, Christine Johnson, the owner of Miracle Mile, says she knows the game’s creators.

“I met them in New York, at a toy fair,” Johnson said. “It turns out they live on Cochran, like, two blocks from here.”

Johnson opened her store in 2013. At the very beginning, she knew that she wanted to create a very specific type of retail experience, something that felt local and special to her customers.

“This is a classic toy store — the kind of toys and games you remember from your childhood,” Johnson said. “And that would be if you’re a grandma looking back to that childhood. Or, you know, those of us who grew up in the ’70s and ’80s.”

On paper, this is not a bad time to sell toys. According to the market research group NPD, toys sales grew by 3 percent in the first half of 2017. And that’s before you factor in the holiday retail season, which is expected to be even more favorable to retailers, toy stores included. But the face of toy retail, like many retail sectors, is changing, with e-commerce and Amazon often taking the blame.

But while larger chain toy stores, like Toys R Us, are closing brick-and-mortar operations, small toy businesses like the Miracle Mile Toy Hall appear to be faring better. In Johnson’s case, her business is profitable and she was able to move the store to a larger, more central location. She feels optimistic about her business.

So are we living in a time when small, independent stores like the Miracle Mile Toy Hall have more lasting power than Toys R Us? According to Jonathan DeCarlo, production manager at market research firm IBISWorld, the answer is yes. E-commerce appears to be hurting large toy stores more than small ones.

“E-commerce is actually causing larger toy stores to decline,” DeCarlo said. “This is due to the fact that they’re able to undercut larger toy stores, offering even lower selling prices than these traditional stores have offered.”

In the past, big chains like Toys R Us could use their size to negotiate better deals with toy suppliers, allowing them sell toys at cheaper prices. But that’s changed as consumers have become more accustomed to online shopping, particularly over Amazon.

“Amazon comes along and just is able to discount toy even further than that,” DeCarlo said. “So it was only a matter of time, if they’re just competing in terms of pricing against Amazon. They weren’t going to last as is.”

But for independent stores, price wars with larger chains have never been attractive business models. According to DeCarlo, this made those smaller stores better able to adapt to a retail landscape that is both virtual and physical.

“We noticed that with independent toy stores, they opt to compete on the basis of quality rather than price,” DeCarlo said. “Basically what that means is by specializing in the sale of higher-end premium toys, these companies can actually justify higher-selling prices that boost their revenue and also preserve their margins.”

“A lot of people would ask, especially in the beginning, ‘How do you feel about Amazon being your biggest competitor?’ And I would always say, ‘They’re not. They’re not my biggest competitor. I don’t compete with online,” Johnson said. “Maybe I’m competing with the toy store in the next neighborhood over. But we’ve never really thought of ourselves as competing with online sales. You just can’t. We have to do our own thing.”

But where she disagrees with DeCarlo is on selling premium toys for higher prices. Johnson has found that, no, she can’t compete with larger stores just by stocking better toys. It’s not that simple.

“I went to another store in the area, a chain store, and I almost cried in the aisles because I saw a number of things that I had picked out for my store that I thought were so special,” Johnson said. “And I realized, you actually can’t compete as well on on that playing level. I mean, they have buyers just like me, going out looking for unique items.”

Instead, Johnson has doubled down on making her toy store a multipurpose space. In her new location, she has the room to host puppet shows, booster events, even book signings. She wants the toy store to be a bit more about people than products — and for now, that plan is keeping her afloat.