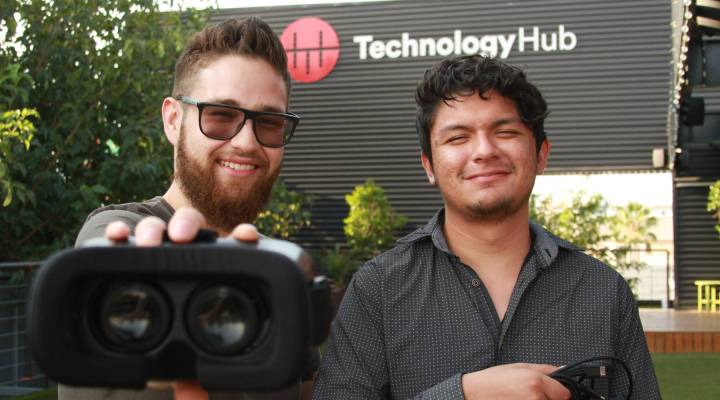 Maquilas, the factories along the U.S. and Mexico border that turn out truckloads of U.S. consumer products and auto parts are notorious for long, monotonous shifts and some of the lowest wages in Mexico. Automation is expected to eliminate as much as 52 percent of these assembly jobs over the next decade. Before that happens, business incubator Technology Hub, in the city of Ciudad Juarez, is working to develop higher paying tech employment, with a push to transform Ciudad Juarez into an innovation-based economy.

Engineering student Manuel Rangel lives on the outskirts of Ciudad Juarez, most of his friends and neighbors work in maquilas nearby. “There is not a lot of money there. The quality of life, we live with what we get, we live by the day,” Rangel said in Spanish.

“For the workers that need to understand that they can do something besides putting pieces manually together. We are very diligent into looking at what is coming in to understand who we need to help,” Mora said. “These people, they need mentoring.”

To do that Technology Hub offer seed funding and mentoring to young entrepreneurs from some of the city’s most disadvantaged communities. More than a third of the Ciudad Juarez population lives in poverty. Mora said he is concerned about quality of life if Ciudad Juarez can’t create higher paying jobs, especially if automation takes away manufacturing jobs. “Our community will suffer in the next ten years, we are in that crossroads where we need to make that decision and help move our city in that direction. Why? Because low paying jobs are not the future.”

But Mora said all the ingredients for Ciudad Juarez to become an innovation economy are here. Fortune 500 companies are already established in Mexico, there is manufacturing infrastructure and according to the World Economic Forum, there are more graduating engineers in Mexico each year than in Germany. But the country still trails most industrialized nations when it comes to the key measures of innovation like patent filings and investment in research and development.