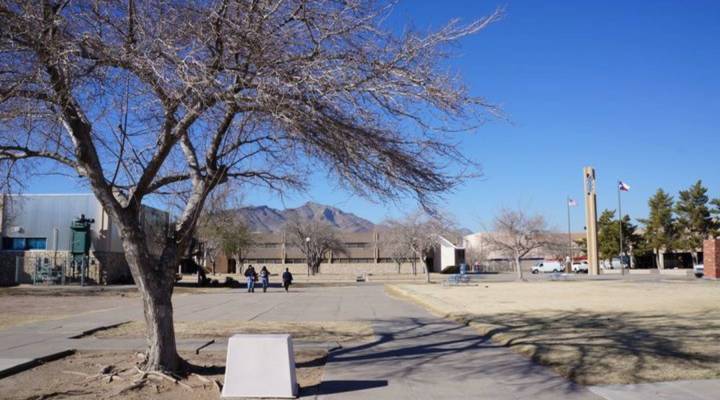 COPY
Bowie is located in the Chamizal neighborhood in the South Central part of El Paso. - Tommy Andres / Marketplace
My Economy

Bowie is located in the Chamizal neighborhood in the South Central part of El Paso. - Tommy Andres / Marketplace
Listen Now

Bowie High School sits just 100 yards from the U.S-Mexico border. It’s one of the oldest operating high schools in El Paso, Texas. Students have a view of Juárez from their basketball courts.

Many students at Bowie and its surrounding schools live in poverty. The unemployment rate in El Paso is a pretty decent 4.8 percent, but about 25 percent of its residents live below the poverty line. Many families can’t afford to provide enough food or a decent place to live. For some students, this stark reality has made them ambitious to make a different sort of life, both for them and their families.

Taryn Medina is a senior at Bowie High School.

Taryn Medina is a senior at Bowie, born and raised in El Paso. Medina’s father spent some of his life homeless, and she knows how hard her dad struggled to get a decent job and place to live. Ultimately, he managed to get through college and is now a teacher at Bowie.

Now Medina is preparing for college herself. She’s applied to several prestigious schools, including Stanford and the Massachusetts Institute of Technology.

Medina said she is “very fortunate” to have accomplished all she has, because of the love and support from her father. But many of Medina’s friends and classmates don’t have that kind of security.

“A lot of my friends that I have class with, they come to school because it’s either they get an education, or they can’t provide for their family,” Medina said. “Because if they can’t get out of the cycle of poverty, then they won’t be able to provide.”

Many students in El Paso, from elementary to university, start their mornings different than most. They wake up in Juárez, where they live, then commute to El Paso by crossing the international bridge. Some of these commuting students are U.S. citizens whose parents returned to Mexico. Others are Mexican citizens with student visas.

This walk is so common, El Paso border officials created special pedestrian lanes just for students at the bridges.

Cynthia Gomez is one of those students, travelling back and forth between El Paso and Juárez every week. Although she’s a U.S. citizen, she began attending school in El Paso just two years ago, and her parents live in Juárez. She stays in El Paso with her aunt during the week, and visits her parents on the weekends. She’s constantly migrating between two cultures, two languages and two nations.

Cynthia Gomez is a senior at Bowie High School.

Gomez said her family is struggling financially because of the peso devaluation.

“My mother works in Juárez. My father had his business in Juárez. But it was closed a few years ago because of the inconvenience of the violence that was there. It has been four years since he has not had his job,” Gomez said. “But we are in the two cities so we need to move on.”

The border that divides Mexico and the United States is also an economic barrier, and it matters what side of it you’re on. That’s why Gomez travels to Bowie High School every day — to build a life that doesn’t require the struggle her parents’ does. It’s also why she plans to continue her education in the United States; Gomez hopes to attend University of Texas at Austin or MIT in the fall.