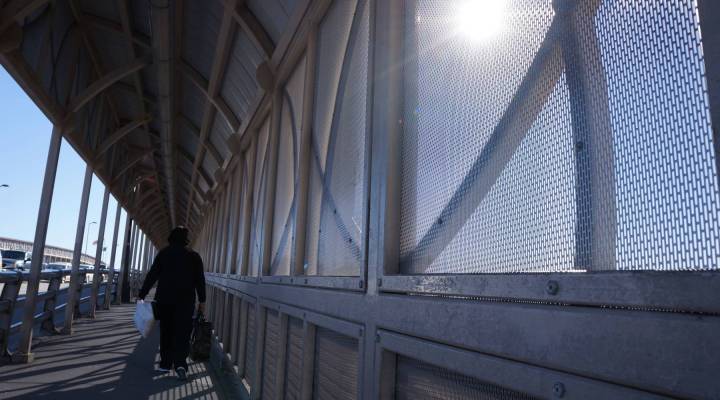 About 70,000 people commute back and forth between El Paso, Texas and Ciudad Juárez, Mexico every day to visit family, shop, work and go school.

The Paso Del Norte port of entry is one of three international bridges in El Paso and one of the busiest border pedestrian crossings between Texas and Mexico. It has multiple car lanes, as well as pedestrian lanes going both directions. Here’s what that walk looks like in 30 seconds:

Eusebio Martinez, 44, is one of the many people in El Paso who splits his life between both countries. Born and raised in El Paso, he walks to Juárez every day to visit his wife Maria Del Carmen Martinez, also 44, who was deported from the U.S. in August 2015.

“She lives close by the bridge so it’s a lot easier to just jump over the bridge, stay there and then come back at night,” Eusebio said. “[On] my days off I spend the night over there with her. On the days I work I stay over here at my house because I go in at seven in the morning, so I’d have to get up at four or five in the morning to cross over and then get the bus and go over there. It’s kind of hard.”

Eusebio and Maria Martinez met in fourth grade and have been together ever since.

After Maria was deported, Eusebio had to leave his apartment and move in with his mother. He dedicates a huge chunk of his day walking to and from El Paso and Juárez. Wait times at the border can range from 15 minutes to four hours. Walking is usually faster than driving through the traffic, but getting through U.S. Customs and Border Protection and back into El Paso takes a very long time.

Eusebio works at Sam’s Club in El Paso and makes $11 per hour. He said his personal economy would feel better if he had a better job, but doesn’t think that exists in El Paso.

Eusebio’s name tag from Sam’s Club hangs just inside the door of Maria’s apartment in Juarez. He comes to see her every day from El Paso.

On the other side of the bridge

Once you’re off the Paso Del Norte Bridge into Mexico, you’re on Calle Juárez. The street is lined with pharmacies, small shops, restaurants and bars.

Juárez was once considered the murder capital of the world, as powerful drug cartels went to war. However, the city’s murder rate now is nowhere near the thousands recorded back in 2010.

A mural of famed Mexican singer Juan Gabriel greets visitors who cross the bridge from El Paso into Juarez.

Maria’s parents brought her over to El Paso when she was just 4 years old.

Eusebio and Maria first met in elementary school and began dating in the seventh grade. They built their lives in El Paso. Their parents, extended family members and their three adult kids all live in El Paso.

“And we already have seven grandkids,” Maria said.

The house Maria lives in now in Juárez belonged to her grandmother. Nobody had been living in the house for quite some time, until Maria moved in last year. It’s a small house on the corner of a dusty residential street. Pictures of her grandkids decorate the white walls inside the home. The small living room is lightly furnished, with just a couch set and a small dinner table, and a couple of holes in the ceiling.

Eusebio and Maria Martinez sit down with Kai in Maria’s apartment in Juarez.

“We’ve been trying to fix it a lot,” Eusebio said.

Maria has serious medical issues that prevent her from being able to work. She’s had five brain surgeries to remove a tumor from her brain. She fears suffering another seizure at any given moment.

Maria’s view from the front steps of her apartment is that of El Paso’s skyline, a daily reminder of the life she used to live.

Not only does Maria miss her husband, her family and her life, but she said she also misses the United States, the country that she grew up in, and considers her own.

“Sometimes I just stand at the door and look towards home,” Maria said, as she stood on her front porch staring at the high-rise buildings in El Paso. “Just thinking of how I can be over there.”