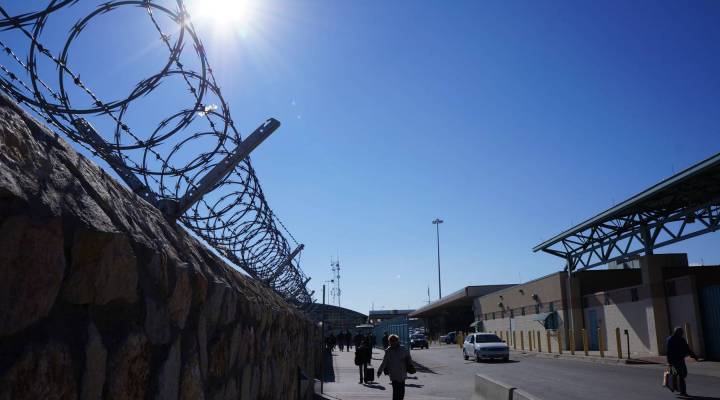 COPY
Roughly 20,000 pedestrians cross the border between El Paso and Juarez each day to work, shop and go to school. Tommy Andres
My Economy

Roughly 20,000 pedestrians cross the border between El Paso and Juarez each day to work, shop and go to school. Tommy Andres
Listen Now

Our team was down in El Paso a few weeks ago for our election-year series “My Economy.” We collected a bunch of stories, including these about small businesses on the border.

The local economy is the global economy

Six days a week, Gina Olvera gets up before dawn at her grandmother’s home in Ciudad Juarez, Mexico. The 20-year-old eats breakfast and sets out on her way. Four days a week she heads to work, the other two days to school. Her commute is just a short walk over the Paso Del Norte Bridge and a few blocks to the KFC where she makes minimum wage, but each day she sets aside two hours for the trip. That’s because Olvera splits her life between two different countries.

Twenty-year-old Gina Olvera lives in Juarez and commutes each day to school and work in El Paso.

Olvera is a U.S. citizen studying to be a nurse at a community college in El Paso, Texas. But to save money for school and her child, she lives in Juarez, where rent is cheap and she can rely on her grandmother for child care.

“It’s pretty complicated because I’m studying in school and work and have a child, but it’s fine, Olvera says. “I have a life. A good life.”

Olvera is one of nearly 70,000 people who cross the border between El Paso and Juarez each day. The two countries are separated by the trickle of the Rio Grande and an eight foot wall topped with razor wire. Those who choose to make the journey must endure long lines and screening at one of the city’s three border crossings.

Paso Del Norte is the largest, a highway-sized expanse of roads and walkways over the Sante Fe Bridge, where tens of millions of people cross each year in vehicles and on foot. People come from Mexico to the U.S. to work and study, but many also come to shop. American goods can be purchased without import taxes and carried over the border, making them a bit cheaper than if they were bought in Juarez. That’s created a bustling shopping district in El Paso called El Centro, and a slice of the country that is more susceptible to the global economy than the rest of us.

A woman buys flowers at one of more than 300 shops in El Paso’s El Centro shopping district.

Economy up, business down

There may be more butts on the corner of El Paso Street and 4th Avenue in El Paso, Texas than anywhere else in the country. Rows of leg-down mannequins stand on tip-toes, pockets out, hoping to grab the attention of those who pass by. They are adorned with bright pink and yellow tags boasting prices as ridiculously low as $9.99. This is Krystal Jeans. Inside the propped open door, owner Jorge Hernandez stands at the counter with his son and daughter-in-law. They are the only ones in the store.

Rows of mannequins line the corner in front of Krystal Jeans in downtown El Paso.

Krystal Jeans is just a few blocks from Paso Del Norte, the busiest of three crossings connecting El Paso and Juarez. Nearly 20,000 people cross the Sante Fe Bridge on foot each day to work, shop and go to school on both sides of the border, and that’s created a bustling shopping district called El Centro on the U.S. side.

“Small business in El Paso depends a lot on Mexican nationals and border-crossers,” Hernandez says. “I’d say it makes up around 80 percent of our business. Whenever they get a cold, it affects us over here.”

Jorge Hernandez is the owner of Krystal Jeans.

El Paso’s economy is in many ways the inverse of the rest of the nation. During the recession, El Paso’s economy stayed relatively healthy. As the U.S. dollar fell, the Mexican Peso got stronger, and the 300 or so shops in El Paso’s El Centro shopping district reaped the benefits.

But since the recession ended, the value of the dollar has been on the rise and the Peso has tumbled. It’s fallen 40 percent in the past two years. That’s kept the Mexican shoppers away and is causing Hernandez to make some tough decisions.

“We watch our overhead. We start cutting hours. We start, sadly, laying people off,” Hernandez says. “We’ve cut our workforce about 50 percent.”

Hernandez was born and raised in El Paso. His parents were Mexican immigrants who opened up a shop across the street from where Krystal Jeans is today. He began working in that shop when he was 16, and eventually opened Krystal Jeans. His son has now taken over daily operations, making it a third-generation retail business. Hernandez says the Peso has gone through many ups-and-downs over his three decades in business, but this one is especially tough. For the first time he’s thinking about the possibility that he may have to close down.

“I’d like to think not,” Hernandez says, “But if the situation continues to go like this, there’s only so much you can do to keep your doors open.”

As the U.S. economy has improved and the Peso has fallen in value compared to the dollar, Mexican goods have gotten cheaper.

That’s bolstered business for Dianna Williams-Hefley. She runs The Desert Gypsy, a shop near the University of Texas El Paso that sells handcrafted art imported from Mexico. She’s been in business for three years, and says sales have been so strong she recently moved to this larger, more prominent location. For Williams-Hefley, the tricky part is navigating the red tape of international trade and the cultural differences of each economy.

“It’s difficult to send money back and forth,” Williams-Hefley says. “The vendors who I buy from and have developed a relationship with frequently give me their banking information and I walk over to Juarez and I deposit into their bank accounts. Then they ship to me. It’s based on the honor system.”

Dianna Williams-Hefley is the owner of The Desert Gypsy.

Williams-Hefley says her upbringing gives her an advantage in her work.

“I’ve spent a good part of my life in Mexico,” she says. “My family moved out there when I was a junior in high school. So I’ve always been able to maneuver there, which I think deters a lot of people from doing business in Mexico just because of the maneuverability factor. It’s a little harder to get things done. You have to understand it’s a different culture, so my learning curve wasn’t that steep. My learning curve was difficult or the steepest in the retail part over here. They say Mexico is the new China. That might be pushing it a little, but I’m hoping that we’re going to be having more trade with Mexico in that way.””

The Desert Gypsy specializes in handmade arts and crafts imported from Mexico.

Williams-Hefley now owns a second home in Guadalajara, and says it’s the most important asset to her business.

If I didn’t have a home in Mexico, I would not be able to do this,” she says. “That way I’ve got one foot on each side.”

Just past the El Paso skyline is the border to Juarez.

One foot in, one foot out

There’s a strange sight that has become rather familiar to the U.S. border guards who man Paso Del Norte. It’s that of a 37-year-old man skateboarding through customs. His name is Emmanuel Urbina.

“I have found that the quickest way to get over the border is to use a skateboard,” Urbina says. “It’s not very traditional to show up at a customs checkpoint with a board, but the wait times at the bridge can go up to like four hours in a car.”

Owner of The Barrios Skate Shop Emmanuel Urbina (left) with John, his only employee in El Paso.

Urbina is the owner of The Barrio Skate Shop. He has two locations, one in El Paso and one in Juarez. They are only a quarter mile away from the border on each side, and he travels between the two shops daily. He says business isn’t easy, but El Paso is uniquely situated for businesses like his to turn a profit, not just because of the foot traffic, but because of the clientele.

“El Paso is a really special place,” Urbina says. “All the large retailers have the best performing stores around this border area. A lot of people ask themselves why. Well, since the demographics here lend themselves to poverty, a lot of the people here don’t have credit cards or debit cards, so it’s still a cash economy. It’s wonderful for the retailers and the malls. It’s unlike anything in the U.S.”

Skateboards line the walls in The Barrio Skate Shop in El Paso.

The Barrio Skate Shop in El Paso is painted all black on the inside. The walls are splashed with the colors of skateboard decks, shoes and hats. Urbina grew up the son of a successful Mexican business man. He says he’s launched several businesses, but this is the first one that shows promise.

“I’m break even. I’m living the American Dream, but it’s a break even American dream.”

Just like Jorge Hernandez at Krystal Jeans, Urbina is also grappling with the tumbling Peso, but he says he’s staying positive.

“I’ve just kept with this idea that things on the border will get border and this cross-border traffic will come back and this tourism will exist again. I’m just trying to position myself as one of these businesses. I dreamt big, I’m dreaming big, and I’m shooting for the stars, but I’ve got to make sure that today we get some sales here and all the bills get paid.”

Paying the bills and getting by. It’s a trickier proposition when your local economy is the global economy.

A mural in downtown El Paso depicts the city as a woman alongside its sister city Juarez.