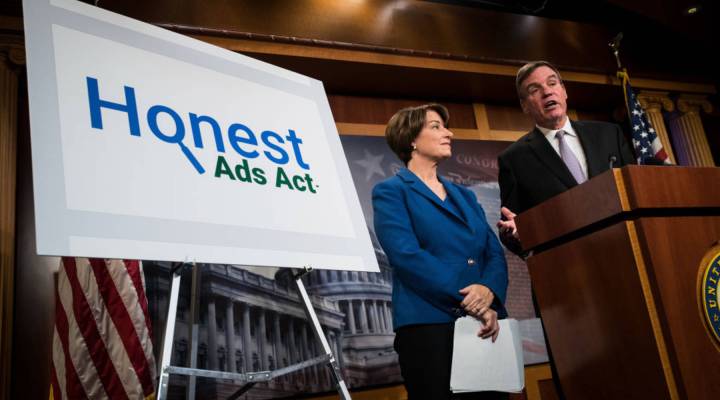 COPY
Sen. Amy Klobuchar, a Democrat from Minnesota, looks on as Democratic Sen. Mark Warner of Virginia introduces the Honest Ads Act on Capitol Hill on Oct. 19. The legislation is designed to increase the transparency of political ads on social media platforms like Twitter and Facebook. Drew Angerer/Getty Images

Sen. Amy Klobuchar, a Democrat from Minnesota, looks on as Democratic Sen. Mark Warner of Virginia introduces the Honest Ads Act on Capitol Hill on Oct. 19. The legislation is designed to increase the transparency of political ads on social media platforms like Twitter and Facebook. Drew Angerer/Getty Images
Listen Now

Sheryl Sandberg, the chief operating officer of Facebook, took to Washington to smooth things over with Congress about Russian-linked accounts using the social network to target political ads in the 2016 election. But her efforts may be too little too late, as Congress introduced a bill today to change the disclosures tech companies must make about political advertising. Marketplace host Kai Ryssdal spoke with Molly Wood, the host of Marketplace Tech, about the controversy.

Kai Ryssdal: So give me, would you, the the argument that is being made for regulating these ginormous companies?

Molly Wood: You know, at its heart, the argument is that political ads are regulated everywhere else. And it may just be time for it to make sense for them to be regulated online as well and particularly because, as we’ve heard so much, we now know that Facebook and Google may have took political advertising from a foreign entity, which would have been barred had they been under the same rules as broadcast outlets and that they have the technology to allow for such specific targeting that the impact of these ads might in fact be greater than if they were just on TV.

Ryssdal: So go back with me a couple of years Molly, right? I mean, there have been moves to regulate that have then been backed away from, right?

Wood: Yeah, they quite specifically did in 2011 say, “You know, we don’t want to kill innovation. We think that it’s important for these companies to be able to basically act as they please.” And the companies sought specific exemptions from the Election Commission about political ads on both their own sites and on third party web sites. And so they have fought this kind of regulation now for several years. And I think we are just at a point now where, frankly, both of them are so large and not very well understood in terms of their impact and the mechanics of how these ads are sold and policed internally that, you know, now you have Congress saying, “I don’t think this is going to hold up any more.”

Ryssdal: One can say, actually, that the millions and millions of dollars that Facebook and Google and all the rest are spending on lobbying and political influence in Washington, it’s paying off for them.

Wood: I think it is, yeah. And it’s very telling that they still don’t want to be regulated, and they are still ramping up those lobbying machines, and they probably are going to fight this kind of oversight as well because they’re also making a ton of money. Facebook and Google together control about 85 percent of the online advertising market. I mean, this is the heart and soul of their business model. And there’s no reason to think even with what we have learned that they’re going to, sort of, take full responsibility and say, “We want to make less money.”

Ryssdal: Spitball it for me, where do these new potentially the new regulations and this piece of legislation that was introduced, where does it go?

John Thune: “These are big companies with a huge amount of influence and power and platforms that people use on a daily basis. You know, we want to ensure that we protect the First Amendment rights and freedoms that people have in this country, but that there aren’t practices or things that are, that will bring harm to people.”

Wood: Now clearly, you don’t hear Sen. Thune calling for any specific legislation right now, although, he is one of the backers of legislation that would force Google and other sites like it to stop hosting third party web sites that promote sex trafficking, and it should be noted that Google has been lobbying quite heavily against that legislation.