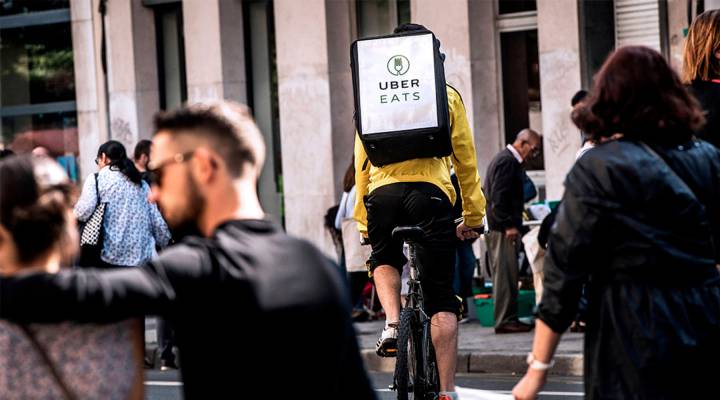 Depending on which research you read, somewhere between 30% and 35% of American workers are part of the gig economy, many of them lining up work via digital apps. Or as tax professionals put it, they’re self-employed. That means they’re responsible for their own taxes. Some of these independent contractors are in for a rude awakening when they file. Host Molly Wood talked with Amy Wall, a tax preparer based in Tucson, about taxes and the digital economy. The following is an edited transcript of their conversation.

Amy Wall: The problem with this gig stuff, it’s typically people who haven’t done it before. We’re still seeing newbies. Any time they have self-employment income of more than $400, they’re required to file a Schedule C, and they’re going to start paying self-employment tax on it. And yeah, they’re surprised.

Molly Wood: I can imagine if I were just a person who had an Airbnb or I were a person who drove a Lyft, and you start saying to me “Schedule C and self-employment tax,” we’re on different universes.

Wall: Absolutely. Airbnb is actually not subject to self-employment tax unless and until they start providing a service. Once they start providing breakfast or pick you up from the airport or whatever, they’re now providing services, and, in the world of the IRS, now it’s a business. If they’re not providing services, it’s just rental income, and it is not subject to self-employment tax. It’s an important distinction. I’m telling people, “Don’t serve breakfast! Make them get their own breakfast!” But something like Uber or Lyft, absolutely. That is self-employment income. They’re providing a service. They’re getting a 1099 from the parent company. That 1099 is going to the IRS. It has to be on the tax return, or they’re going to get a not very friendly letter a couple of months later saying, “Where is this income?”

Wood: How much are these companies doing to set these workers up for success, do you think? Is this part of the starter packet, what you should do about your taxes?

Wall: I have not seen companies doing that. Airbnb actually does have an entire brochure that they make available to explain how to do taxes. Now Uber and Lyft are, these days, at least providing the number of miles driven, which is a big help. In the early days, we were having to ask people, “So, how many miles did you drive?” And they’d look at us like, “What?” If you’re driving Uber or Lyft, you are using your vehicle. Any miles are deductible at the standard mileage rate, which changes from year to year.

Wood: What would you like to see companies provide? If you could write them some best practices about what they should be telling these independent contractors as they come on, what would that look like?

Wall: What would be wonderful is if they could provide periodic reports that say, “Your self-employment tax on this amount of income is X.” Of course, they can’t calculate it exactly because they’re not calculating the expenses, the cellphone and all that, but they could surely calculate it on the growth. That would be nice. At least people would not be surprised when they come to their tax preparer’s office.

Not everyone in the gig economy is doing a great job at dealing with the taxes they owe. A February audit by the Treasury Department found that the tax gap for self-employed workers, the amount they owe and aren’t paying, is almost $70 billion.

There’s been lots of talk about how, now that Lyft has gone public and Uber is expected to do the same, along with Airbnb, suddenly lots more people and financial institutions are going to be literally invested in a business model that relies on really reclassifying labor. Tech companies in particular have become known for using lots of contract workers instead of full-time employees and, of course, building entire armies of on-demand drivers and delivery people who aren’t technically employees. Economists and labor experts say we’re going to have to figure out a safety net for these workers, whether it’s shared benefit pools, future unions or just some rules.

On the topic of taxes, I host this other podcast called Make Me Smart with Kai Ryssdal and we recently did an episode on taxes where we talked about how, despite our technological advances and how in many other countries the government just adds up your tax obligation and sends you a bill, here in the United States, big tax filing companies have lobbied for years for that not to happen. In fact, just this week, ProPublica reports that a bipartisan bill is making its way through Congress right now that would permanently bar the IRS from setting up an online system of tax filing that would be free for anyone to use. On a related note, last year Intuit, which makes TurboTax, and H&R Block spent about $6.6 million lobbying Congress on various issues, including and mostly this IRS bill.