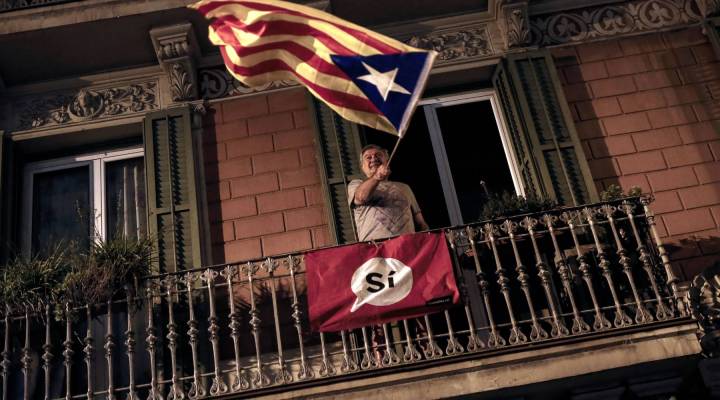 COPY
A man waving a pro-independence flag near a polling station in Barcelona. Pau Barrena/Getty Images

This past weekend the Spanish region of Catalonia voted on an independence referendum. Ninety percent of the nearly 2.5 million ballots cast were in favor of independence. Catalonia may want to secede for economic reasons, but it could cause some serious economic damage to Spain if they split. Marketplace host Kai Ryssdal talked with Marketplace London Bureau Chief Stephen Beard to unpack the latest from the independence efforts. Below is an edited transcript of their conversation.

Kai Ryssdal: Give me the economic once over on Catalonia, would you?

Stephen Beard: Well, this is an integral part of Spain which we should remind ourselves is the 14th largest economy in the world and the 4th largest in the EU after Britain leaves. It is one of the richest regions in Spain. It’s a big net contributor to the central government’s budget, it accounts for almost 20 percent of the Spanish economy. It has the country’s business capital within its territory — Barcelona. The whole country of Spain would struggle to hold itself together if Catalonia separated.

Ryssdal: So we know then why the Prime Minister Mariano Rajoy, was so intent on keeping it. What inside Catalonia drives the independence movement then?

Beard: There’s a very strong cultural element here and there has been for years. Catalans have their own language, their own culture. But in recent years economics is undoubtedly a very important driver of this move. Many Catalans blame the central government in Madrid for exposing the country to the 2008 financial crisis, for not restraining the real estate boom that preceded it. Even though they make a big net contribution to the central government’s budget, they feel that they suffer disproportionately in the austerity, in the public spending cuts that followed.

Ryssdal: Right. Can’t help but notice that the euro is down here this morning, against the dollar. Take a step back for me would you and give me the European Union wide picture on this thing.

Beard: This is a horrible and difficult issue for the EU. I mean various EU leaders have come out today and condemned the police violence and brutality but the general reaction has been “this is an internal matter for Spain, we don’t want to get involved.” The EU hates this of course. Separation and secession within a member state is very bad news for a block that is striving to hold itself together and is currently doing its utmost to punish Britain for daring to break away from the EU. At a practical level there are a number of different regions across Europe, in Italy, in Belgium, that might, if Catalonia are separated, be tempted to try the same thing.

Ryssdal: Never a dull moment in the European Union. Quickly Stephen, what’s next? Where do we go from here?

Beard: Well the Catalan leader says he’s going to put the referendum results to the Catalan Parliament and let it decide what happens next. It’s difficult to say what is going to happen next in this very volatile and febrile atmosphere. But the Catalan parliament, some suggest, will declare independence later this week. However, we should say according to our last opinion poll on this subject, most Catalans, by a margin of about 8 or 9 percent, were actually against independence, so who knows. I mean  given the bloodletting on Sunday maybe that will sway more people into the independence camp.

Ryssdal: There is a general strike called for tomorrow right in Catalonia?

Beard: There is, yes. I mean more than 40 labor unions have called for a region wide general strike so whatever happens, Catalonia and Spain are in for a period of considerable turmoil.