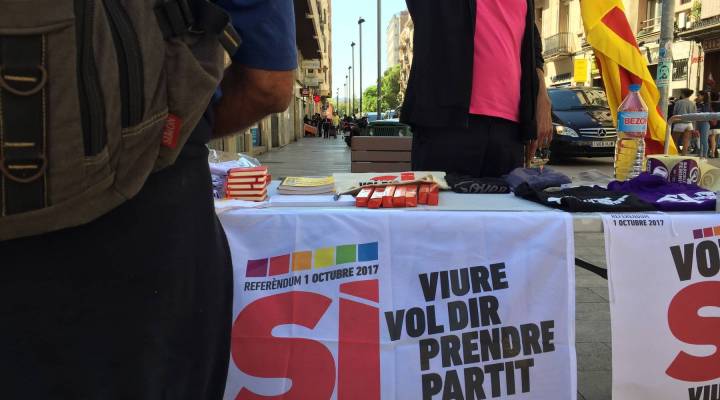 COPY
Merchandise stands have popped up all over Barcelona, selling everything from T-shirts to banners that say "Sí" for a "Yes" vote. The region is preparing for an independence referendum on Oct. 1 to secede from Spain, a move that the central government has declared illegal.  Lucia Benavides/ for Marketplace

Merchandise stands have popped up all over Barcelona, selling everything from T-shirts to banners that say "Sí" for a "Yes" vote. The region is preparing for an independence referendum on Oct. 1 to secede from Spain, a move that the central government has declared illegal.  Lucia Benavides/ for Marketplace
Listen Now

Catalonia, the northeast region of Spain, with Barcelona as its capital, is preparing to vote on an independence referendum on Oct. 1 – which Spain has declared illegal. The region has its own language, a proud identity and a history of repression by Spain. But culture and politics aside, many say the major reason Catalonia wants to secede is economic: Catalonia has the highest GDP out of all the regions in Spain, and at 266 billion euros, almost one-fifth of the country’s economic output.

On a weekday afternoon less than two weeks before the referendum, about 40,000 people gathered outside Catalan government offices in downtown Barcelona to protest raids and arrests of local officials by the Spanish police force, the Guardia Civil. The raids came days after police also raided printers, newspaper offices and private delivery companies in a search for campaign literature and ballot boxes. People of all ages chanted: “This also happened with Franco” – a reference to the dictatorship of Francisco Franco that ended in the late 1970s. The protestors wore the red-and-yellow-striped Catalan flag as capes, and banners that say “Sí” (for a “Yes” vote) hung over nearby balconies.

“At this moment, the people need change,” Josep Minguet said.

He speaks in Catalan, the prominent language of the region. Having lived through the Francoist dictatorship as a young adult, when the region experienced repressive measures that abolished Catalan institutions and banned the official use of the language, he feels Catalan people continue to be oppressed. But others, like Jessica Boluda, said the issues are economic.

“We pay our taxes to the government and we didn’t receive back all that we need,” Boluda said.

Spain’s Prime Minister Mariano Rajoy has called on separatist leaders to stop what he calls “disobedience” and an “escalation of radicalism.” He said the vote goes against Spain’s constitution that states the country is indivisible.

Economics professor Elisenda Paluzie said Catalan residents represent about 16 percent of the country’s population. Yet these same residents contribute 20 percent of Spain’s taxes, and then receive 14 percent back for public expenses. She said Catalonia is economically important for Spain, and if it were to secede, “they lose a territory that’s relatively rich and contributes a lot to taxes.”

Paluzie said the 2008 economic crisis helped increase separatist sentiment in Catalonia – the region experienced the highest budget cuts. Then, in 2010, Catalonia sought a statute that would have allowed it to collect its own taxes – much like the system in another autonomous region of Spain, the Basque Country. The Spanish government rejected that.

“It was seen as an aggression to the capacity of Catalans that had done everything under the legal way,” she said.

And in the case of secession, Paluzie said Catalonia is economically viable without Spain: its GDP is around that of Denmark’s, and its GDP per capita is higher than Spain’s.

The Catalan government vowed to declare independence within 48 hours if a “Yes” wins on Oct. 1 – it has laid out plans for secession and started working on a tax agency to collect its own taxes. Spain’s economy minister, however, warned of a “brutal” economic collapse and rise in unemployment if Catalonia were to secede.