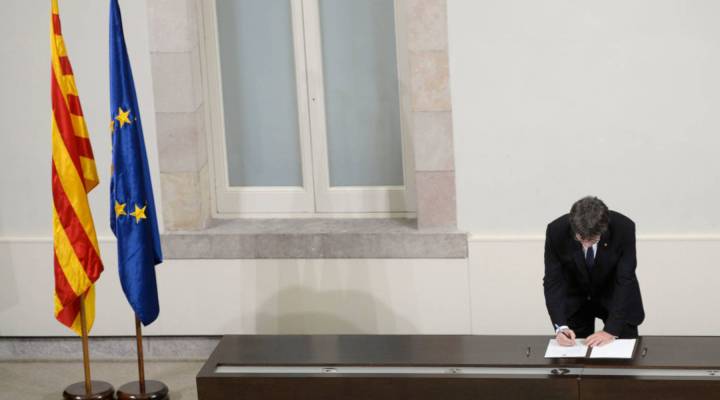 Catalan regional government president Carles Puigdemont signs a document about the independence of Catalonia at the Catalan regional parliament in Barcelona on October 10, 2017. Catalonia's leader Carles Puigdemont said Tuesday he accepted the "mandate of the people" for the region to become "an independent republic," but proposed suspending its immediate implementation to allow for dialogue. JOSEP LAGO/AFP/Getty Images

Catalan regional government president Carles Puigdemont signs a document about the independence of Catalonia at the Catalan regional parliament in Barcelona on October 10, 2017. Catalonia's leader Carles Puigdemont said Tuesday he accepted the "mandate of the people" for the region to become "an independent republic," but proposed suspending its immediate implementation to allow for dialogue. JOSEP LAGO/AFP/Getty Images

Carles Puigdemont, the president of Catalonia — the region of Spain that voted for independence over a week ago — issued a formal declaration of independence yesterday. But, almost in the same breath, he said he was willing to work with Spain’s government on an agreement. This morning, Spain’s Prime Minister Mariano Rajoy said he has asked Puigdemont to confirm whether or not he has declared independence.

Christopher Dottie, president of the British Chamber of Commerce in Spain, joined us to explain what impact all of this confusion is having on businesses in Spain. Below is an edited transcript.

Anu Anand: After the events of yesterday evening in which we saw you know a statement saying look “we won the right to secede we’re not going to though”— what are businesses telling you is the climate this morning?

Anand: And that withdrawal in a way — though not great for those who are in favor of independence — might actually be stabilizing for businesses?

Dottie: Yes, in terms of business as you quite rightly say we’re looking for some security here. This is the main reason why headquarters are moving. This isn’t investment decisions at the moment. This is just judicial stability. However unlikely it appears, especially in a democratic free Western European country in the European Union, there is a fear that suddenly it would become a territory where the responsibility to raise taxes is disputed. So companies fear getting tax demands from two government authorities; they fear a freeze on capital flows. So that’s why companies are moving to establish their headquarters in other regions of Spain.

Anand: You’ve got more than 7,000 foreign companies based in Catalonia. Is there a point at which they decide for stability sake to also start moving staff not just headquarters?

Dottie: I don’t think we’ll see moves until we get to the medium term. I think companies already established in Catalonia will remain until they get a view of what the future Catalan situation is going to look like — whether it comes back within the Spanish fold or in the case of independence what independent Catalonia would look like. For instance would it be within the European Union, what currency would we apply, etc.  So I think companies won’t start moving out until we see the medium term effects. What could happen in relatively short term is a lack of investment decisions. So companies who are thinking of investing in Catalonia at the moment might be delaying that or might be moving to other regions.

Anand: Any sense of the Catalonian authorities are listening to business concerns?

Dottie: Well, I think one could argue that the speech last night and the ambiguous nature was a direct result of the lack of support from the European Union and also the companies leaving. I think that might have made a difference. I think society always needs to decide what it wants and business needs to adapt. It shouldn’t be business deciding what society looks like. But hopefully there is some thought of what the economic consequences of changes are going to look like. So we’ll see. It’s still very much a political battle and quite a conundrum at that.