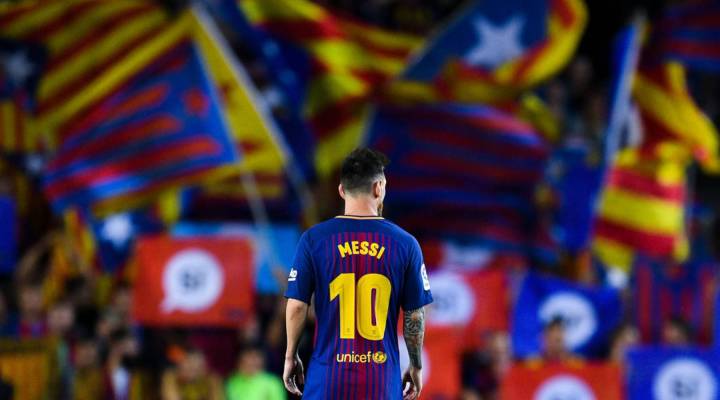 Lionel Messi of FC Barcelona looks on as Catalan Pro-Independence flags are seen on the background during the La Liga match between Barcelona and SD Eibar at Camp Nou on September 19, 2017 in Barcelona, Spain.  David Ramos / Getty Staff

Lionel Messi of FC Barcelona looks on as Catalan Pro-Independence flags are seen on the background during the La Liga match between Barcelona and SD Eibar at Camp Nou on September 19, 2017 in Barcelona, Spain.  David Ramos / Getty Staff

If Catalonia’s push for independence succeeds, it would bring with it huge financial and social repercussions for Spain. It could also have consequences for one of the region’s most valuable institutions: FC Barcelona.

The soccer club — “Barça” to its fans — can only be talked about in superlatives.

It’s one of the richest clubs on the planet: this year it reported a record revenue of $770 million, the highest in the history of sports. It’s worth $3.64 billion according to Forbes, putting it among other heavy hitters like the New York Yankees and Manchester United.

It’s a global brand with millions of fans, the most followers on social media (145 million) and owns the largest stadium in Europe: Camp Nou seats almost 100,000 spectators.

As a global business, it’s expanding in cities like Hong Kong and New York, where the club opened its North American headquarters earlier this year and launched a youth training academy.

But this week, Barça found itself caught at the intersection of sports and politics.

On Sunday, Camp Nou sat empty and silent as the team played a scheduled game against Las Palmas, while outside the gates, voting for Catalonian independence, and the Spanish government’s violent response to that referendum unfolded.

The club had asked for the game to be postponed on account of the voting, but the Spanish soccer federation, La Liga, denied that request.

So FC Barcelona President Josep Maria Bartomeu made the decision to continue the game behind closed doors as a protest, and explained his decision: “We did it to highlight the lack of freedom we are experiencing in Catalonia. It’s an image for the entire world.” On Tuesday, the soccer club joined the ongoing strike in Catalonia, closing its headquarters and suspending games.

It’s historically been a symbol of a strong, independently-minded Catalonian identity since its beginnings almost 120 years ago. It’s lived by its motto: ‘Més que un club’ (more than a club), and is often described as the region’s unofficial army.

Camp Nou is where, 17 minutes and 14 seconds into game time, the crowd unfurls yellow and red Catalan flags and chants a song about independence, a reminder of September 11, 1714, the year Catalonia was defeated by and lost its autonomy to Spain.

If Catalonia leaves Spain, the rules of Spanish soccer would dictate that FC Barcelona would also have to leave La Liga, taking with it both the prestige and revenue generation that it currently represents.

Club President Bartomeu has already said the club’s board of directors is discussing what to do if Catalonia gains independence, and considering which of Europe’s other leagues it could possibly join.

The options are limited: there’s been talk of creating a new, Catalonian league with a few teams, of FC Barcelona joining the English Premier League or even the French soccer league. So both the league and the club stand to lose from parting ways.

And then there’s El Clasico.

More superlatives here: El Clasico is the annual clash of the titans between FC Barcelona and Real Madrid, the biggest club soccer event of the year. Last year drew 400 million viewers globally, almost 2 million of those viewers watched it here in the U.S. Everybody wins with a rivalry so lucrative that it generated $42.5 million in media value for sponsors across screens and platforms.

A potential separation will be felt elsewhere too: it raises questions for FIFA, which might find itself embroiled in this issue, and even for the city of Barcelona itself, where the club’s roots are dug deep and where Barça’s contribution to the city’s economy represented 1.5 per cent of the city’s GDP.

How the situation ultimately shakes out, for both Catalonia and FC Barcelona remains hazy. Ninety percent of the votes in the referendum were in favor of separation, and protesters remain defiant.

One of Barça’s most high-profile players, Catalan Gerard Piqué, has echoed that note of defiance, and criticized the government’s response to the vote.

“This decision has made things a lot worse. It is one of the worst decisions made by this country in 40 or 50 years,” he told the BBC. “It has only served to separate Catalonia and Spain more and it will have consequences.”