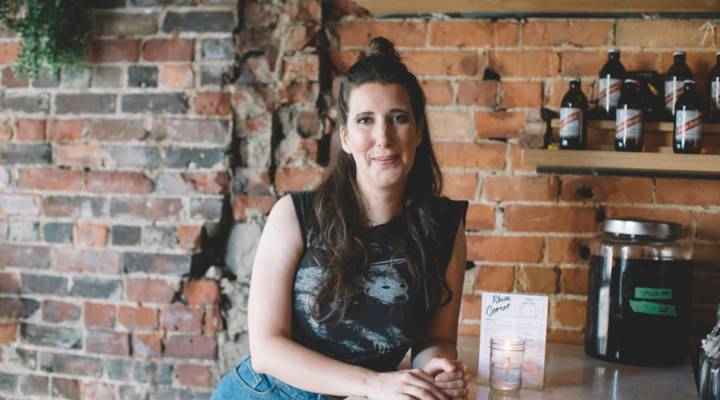 Jen Agg is a Canadian restaurateur who opened her first cocktail bar in Toronto in her early 20s. Today, she runs a mini restaurant empire that includes The Black Hoof and Rhum Corner in Toronto along with the newly opened Grey Gardens, and Agrikol in Montreal. Agg recently released a memoir about her life and business, “I Hear She’s a Real Bitch.”

Agg talked to Marketplace host Kai Ryssdal about her management style, the importance of creating the right mood for dining and why she wishes the restaurant industry was less sexist. What follows is an edited transcript of their conversation.

Kai Ryssdal: So I should say, before we actually turned the microphones on to start recording, I asked you how you should be identified because I like to make sure I get that right. And you said “writer and restaurateur or restaurateur and writer, either one of those which is comfortable.” I notice you didn’t say chef. You’re not a chef restaurateur, you just run the places.

Jen Agg: Yeah. No, I’m definitely not a chef. That’s a common misperception.

Ryssdal: You got into it though via, we should say cocktails basically, right?

Agg: Yeah. I mean I got into it via needing a job as a teenager really. And realizing— I don’t really understand these young kids who go into retail for minimum wage when you can make so much more money and have a lot more fun in restaurants.

Agg: I think restaurants really are extraordinarily mood based. So I think people think that they go to restaurants and they just want to eat the food. But really I think the atmosphere, the service, the lighting, the general vibe, the way you feel when you’re in there, contributes to so much more about your experience than you sort of maybe are willing to admit. The Hoof is intended to feel very casual, comfortable. It’s a cool space. I mean it’s hard to use the word cool because you end up sounding kind of like an asshole. It’s a straight forward space but I think that when you walk in, you’re just immediately triggered by the fact that it’s a fun room. It feels good.

Agg: I do. I still work often. Right now because we just opened Grey Gardens, which is our new place in Toronto, I’m there all the time during service, just watching and monitoring the room and talking to people and managing a little bit here and there. But yeah, I still like to do hosting shifts every once in a while at The Hoof.

Ryssdal: What does it mean to you to be able to do that?

Agg: To be plugged in. This whole business really does revolve around the idea of family. And it’s not just for practical purposes, that you’re seeing these people you work with everyday more than you see your actual family. But if you are too unplugged from that in a real way for too long, and I know lots of restaurant owners probably are, but it doesn’t work for me. I need to actually connect with these people that are working so hard for me and making the places actually operate properly. It’s all about your staff, so if you kind of turn away from that or you’re busy expanding and you’re not actually in your rooms and checking things out, it shows.

Ryssdal: You are though running, frankly I’ve lost count four or five, high profile places, can’t be in all of them once, how do you keep yourself plugged in?

Agg: I go to Montreal a lot to check in there. We have Agrikol in Montreal. I just got back, I was there for the day. Basically yesterday I flew in at noon and I was out by like 6 p.m. the following day. It doesn’t seem like a lot of time but I was able to have face time with the managers and the cooks and just connect with the staff. And then in Toronto I ride my bike around a lot. The restaurants are all really close together. There’s The Hoof, Rhum, and Cocktail Bar in this trifecta on Dundas and it’s like this little island of loveliness that we built for ourselves. It’s very nice so we just make it work.

Ryssdal: There’s an American-centric question I have to ask, mostly because I don’t want to have to go to Toronto and go to The Black Hoof, you going to come to the States anytime soon?

Agg: What, you don’t want to? Toronto’s nice, first of all. Look around your country, pal.

Ryssdal: I lived in Ottawa for two years. Coldest years of my life. Lovely town but I froze my ya-yas off. But so LA maybe? New York? I don’t know.

Agg: I never say never but I don’t want to. It was a really really difficult to open a restaurant 500 kilometers, that is two hundred and sixty miles for you guys, can you guys just adopt the metric system? It’s time.

Ryssdal: Don’t get me started on that, I know.

Agg: It’s time. So it seems unlikely although I love coming to LA to visit Jess at Sqirl. I’m going to be definitely coming and doing something soon.

Ryssdal: This book is about a lot of things, that are a lot of threads in this book, right, there’s creativity, there’s hard work, there’s sex, there is also sexism and the misogyny that you find in the restaurant business and it’s not something that is apparent in popular society because you know you get all these cool cooking shows and this and that and celebrity chefs. But it’s real and it’s there.

Agg: Right. I think what’s really interesting about restaurants is we’re in the business of public facing hospitality. Usually I think that’s why people as guests and customers of the restaurant, they don’t see it. You know people that are maybe perpetuating this terrible culture are able to turn on the charm and you’re going to be a little bit maybe blinded by that. I think that’s a part of it.

Ryssdal: Give me the rest of it.

Agg: Well I mean it’s many prongs. It’s a male-centric industry, first of all. I don’t know too many women who are chefs let alone restaurateurs. I mean obviously they’re out there. Obviously that’s changing. But yeah so you’ve got kids coming in the industry really really young, learning this sort of Wild West of kitchens. And I mean that’s part of what keeps these young men and women interested in these 12 hour days is that, this isn’t an office, this isn’t an uptight room that you’re in and you can let loose a little bit. And I think when it goes too far and it often does, that’s where the problem starts to happen so it’s trying to find that nuance for people and explain well no you can still actually have fun but you can rein it in and not make this young immigrant dishwasher the butt of the jokes.

Ryssdal: You’ve been doing this 15, 18-ish something years —

Ryssdal: Okay. Is it getting better?

Agg: Ah. Um. I mean. Yes, in that — you know, I don’t — you know I don’t know. Like I feel I feel right now the climate in our world is terrifying. So, no I don’t think it’s getting better. [Long pause] Sorry.

Click here to read an excerpt from “I Hear She’s A Real Bitch” by Jen Agg.