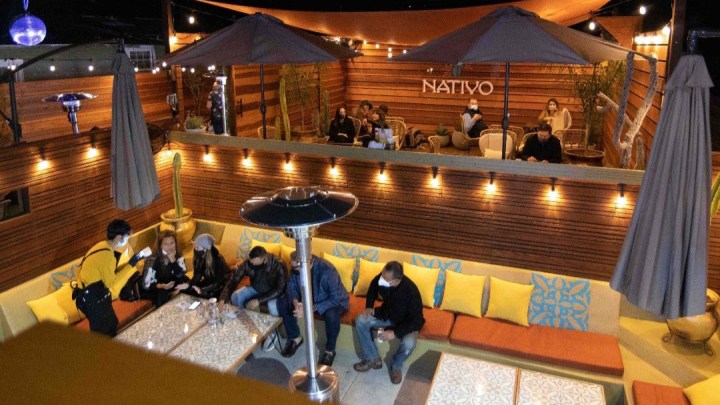 COPY
Restaurateur Gabriel Paredes and his staff transformed the parking lot behind the restaurant into an outdoor dining space with wood walls and multiple levels. Richard Hozack
COVID-19

Restaurateur Gabriel Paredes and his staff transformed the parking lot behind the restaurant into an outdoor dining space with wood walls and multiple levels. Richard Hozack
Listen Now

On a recent Wednesday night in Highland Park, a neighborhood in Northeast Los Angeles, the head chef at Nativo, Danielle Duran-Zecca, was in the kitchen putting the final touches on a potato chorizo taco before handing it off to a server.

Duran-Zecca designed the menu here, which features an array of dishes that combines the flavors of Mexico and Italy. “I am a Mexican, my husband is Italian. So I love to combine the best of both worlds,” said Duran-Zecca.

Out back, the parking lot had been transformed into a dining space with wood walls and multiple levels. Mexican blankets were draped over bales of hay for seating. A young couple with a baby was taking selfies underneath a spinning disco ball hanging from a tree, as the bar manager Grace Perez strolled by holding a bundle of burning sage. “I feel like we all need a cleansing sometimes,” Perez said, with a laugh.

The vibe is festive, but there’s an undercurrent of sadness and uncertainty among the staff. Because tonight is the last night of dining before a countywide ban on outdoor dining brings a sudden end to what had been an opening week of full reservations.

“My wife and I, we sold everything to make this come true,” said Gabriel Paredes, choking back tears. “Sorry, I feel silly getting emotional about it.”

Paredes and his wife, Corissa Hernandez Paredes, are the owners of Nativo.

It means a lot to Paredes that he was able to open his own restaurant here in the neighborhood where he grew up. His parents came to LA from Mexico before he was born. As a kid, he walked the streets of Highland Park with his dad, selling boots to make ends meet. “I’ve had friends get killed on this street we are on, and it’s just awesome to come back and be able to create jobs and contribute,” Paredes said.

Before the outdoor dining ban, he had a staff of about 40 people. Prior to opening Nativo, Peredes and and his wife started a financial planning company that they ran for 14 years.

“Our market was low- to middle-income families that had been overlooked by the financial industry. So we really focused on educating them on finances. Just couldn’t do it though. It wasn’t my passion. The only other thing I knew how to do or really understood was beer. I didn’t go to college. so I said ‘Let’s open up a bar of some sort,’” said Paredes.

He knows the risk of opening a restaurant, and that the stakes are much higher for people like himself who don’t have the economic safety net of generational wealth.

Paredes said he pays his parents’ mortgage on a condo. He sold his childhood home to open Nativo. So a lot is riding on his restaurant.

“If you don’t hit your dream, you are done and you won’t be able to support your parents and the people that are relying on you, such as kids,” he said.

For now, Nativo is offering takeout only, which allows Paredes to at least keep the kitchen staff employed until outdoor dining can resume.