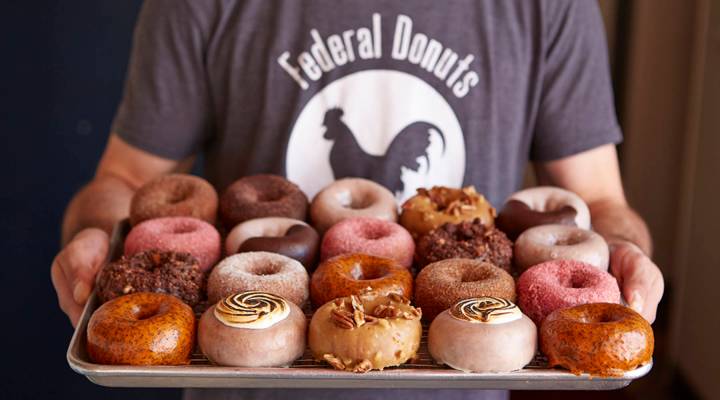 When James Beard Award-winning chef Mike Solomonov, his restaurant partner Steven Cook, and three of their friends decided to start a donut and fried chicken restaurant in Philadelphia, they thought it would be simple. They also weren’t expecting much. Turns out, the process was a bit more complicated. After a series of trials, including the realization that they knew nothing about donuts, the group opened Federal Donuts in 2011 … and almost immediately ran out of everything. And they ran out the next day too.

Solomonov and Cook have a handful of other restaurants to their name, including Zahav, an Israeli restaurant also in Philadelphia. Together they’ve written “Federal Donuts: The (Partially) True Spectacular Story,” about the restaurant’s founding, which also of course includes recipes. They talked with Marketplace host Kai Ryssdal about how the recession influenced their thinking when it came to opening Federal Donuts and their ideas for franchising. What follows is an edited transcript of their conversation.

Kai Ryssdal: I have to tell you based on the first couple of chapters of this book it’s kind of amazing that Federal Donuts got off the ground. There was a comedy of errors thing going on here.

Mike Solomonov: I thought you were going to say it’s amazing that you guys have a book.

Steven Cook: And that they printed it.

Ryssdal: Yeah, that too, but you know.

Cook: Yeah I mean we really just sort of backed into it. We didn’t have very high expectations for it at all. As we say in the book we sort of just wrote off the investment immediately.

Cook: In our minds, in my mind anyway.

Solomonov: We thought it was going basically into the wood burning oven at our restaurant, it was just finished.

Ryssdal: Wow. We should say Mike that you are a you’re a chef of some repute. I mean you’re a name guy.

Cook: He’s very modest but he is the man.

Ryssdal: Well Mike, I’m not going to let you go on this one. Why donuts after literally an award winning career in regular restaurants?

Solomonov: Uh, I mean I think that like — So here’s the deal about chefs, famous chefs—

Cook: Didn’t take him very long to warm up to that.

Solomonov: I’m just, you know, I usually make people kiss the pinkie ring before I even say that. But here’s the deal, right? We can sit and come up with formulas and talk and rationalize what works and what doesn’t work with restaurants. But the truth of the matter is, a hit is very random. Zahav worked. We opened a couple of other restaurants. In 2008 and 2009 when you know, the economy wasn’t doing so well, we didn’t want to go back to a bank and go back to a groups of friends and family and people that were stupid enough to give us money to open up these businesses when we weren’t so confident in what we were doing and Federal Donuts came across very organically and as Steve said we just kind of like three threw together money that we weren’t that concerned about losing and it worked.

Cook: To be able to get back to why we got into this business in the first place to have fun and only be worried about making great donuts and fried chicken and not being worried about the finances of it was really liberating.

Ryssdal: Steve are you guys worried at all about, I mean donuts are hot right now right. And they’re very hip and they’re casual and they’re fun and all this jazz and there are places here in LA that are sort of like Federal Donuts except the LA version. How much do you worry about that donut bubble.?

Cook: That’s one of the most common questions that we get asked. And I haven’t looked at the numbers recently but when we first started out and people were comparing us to cupcakes I just looked and said you know there are 7,000 Dunkin’ Donuts locations worldwide. The donut is a is an icon. It’s not going anywhere. Our donuts are not too high brow. I mean we don’t sort of fetishize it we just try to make a really saw a donut. And I think people will always want that.

Ryssdal: Steve it seems to me that the franchising possibilities here are endless and that we could see Federal Donuts in like LA in 18 months. What do you think?

Cook: You got a location?

Ryssdal: LA’s big, we could find some room.

Cook: We talk about it all the time and we just opened a Fedearl Donuts in Miami so we are dipping our toes in those waters. I think you know, back 10 years ago nobody would answer our phone calls. That was the biggest hurdle to us growing. Now the biggest hurdle is you know so many opportunities and how to be wise about expansion. We’re living in an age where the restaurant business, there’s so much money flowing in and the beauty of Federal Donuts is that the financial success really came second. So we want to be very careful about our expansion and not lose whatever that magic is that we found five years ago.

Ryssdal: So what are you, are you a chef or an entrepreneur?

Solomon: I don’t know, I don’t know what I am. Steve, what are you? Everyone thinks that Steve because he was in finance before and is considerably smarter than me, he’s like the money guy but I’m like we bleed and suffer the same. What are you Steve, are you a chef?

Cook: I hope not. 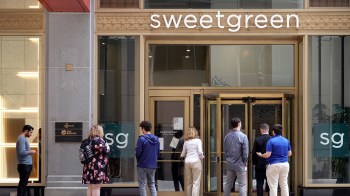