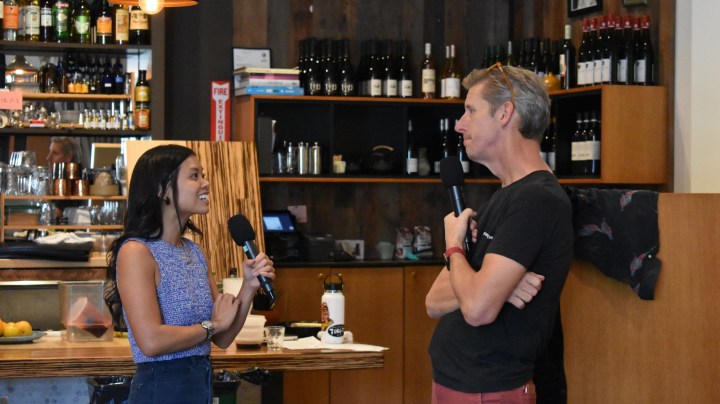 COPY
Lien Ta (left), co-owner of Here's Looking at You, speaks with "Marketplace" host Kai Ryssdal. "What every restaurant is seeking is consistent business," she says. "And we have that right now." Anais Amin/Marketplace

Lien Ta (left), co-owner of Here's Looking at You, speaks with "Marketplace" host Kai Ryssdal. "What every restaurant is seeking is consistent business," she says. "And we have that right now." Anais Amin/Marketplace
Listen Now

About an hour and a half before opening at 6 p.m., prep was well underway in the kitchen at Here’s Looking at You, a restaurant in the Koreatown neighborhood of Los Angeles.

“We’re just setting up,” said co-owner and chef Jonathan Whitener. “I was just doing the menu a second ago to get ready for service.”

At the front-of-house, preparations were also underway. The restaurant’s other co-owner, Lien Ta, had been organizing a new set of keys at an unoccupied table.

“Someone tried to break into the restaurant last Wednesday,” Ta said. “So we invested $2,800 in a new lock, doorknob and deadbolt.”

Ta and Whitener own a pair of restaurants in Los Angeles, but Here’s Looking at You was the first they opened together, back in 2016. Since opening, the restaurant has been a favorite among food critics.

But the business hit a wall during the COVID-19 pandemic. According to an estimate from the National Restaurant Association, 90,000 food service businesses closed. Here’s Looking at You was one of them, shutting down operations in July 2020.

“I feel like we needed to carry a responsibility to be a great success story.”

In the fall of 2021, Ta and Whitener got an opportunity to reopen. But in the two years since the closure, the restaurant was involved in a sale that placed it in a long escrow. Although the sale ultimately fell through, Ta and Whitener were still on the hook for back rent for the period — nearly $90,000. So to recover some of the funds, they turned to their community.

“We did a huge GoFundMe,” said Ta. “When you involve the public that way, I feel like we needed to carry a responsibility to actually be a great success story, and actually open.”

After a short soft launch, the restaurant did reopen in January. And for now, things are going all right.

“We’re very lucky to be very beloved and supported,” she said. “And really what every restaurant is seeking is consistent business. And we have that right now. Are we gonna get rich? Never.”

“I could go tomorrow and probably find a job.”

While the leisure and hospitality labor market has made significant gains since the pandemic, it’s still down 7.1% from February 2020, according to Department of Labor data for July 2022. In the same month, the agency reported there were over 1.3 million job openings, putting experienced food service workers like Kent Thompson in demand.

“I could go tomorrow and probably find a job,” said Thompson, who’s been a bartender for over 10 years. “There is definitely heavy demand.”

But for co-owner Lien Ta, coverage is only one concern. “You know, we’re sort of used to emergencies running restaurants, but this is pretty unprecedented times.”