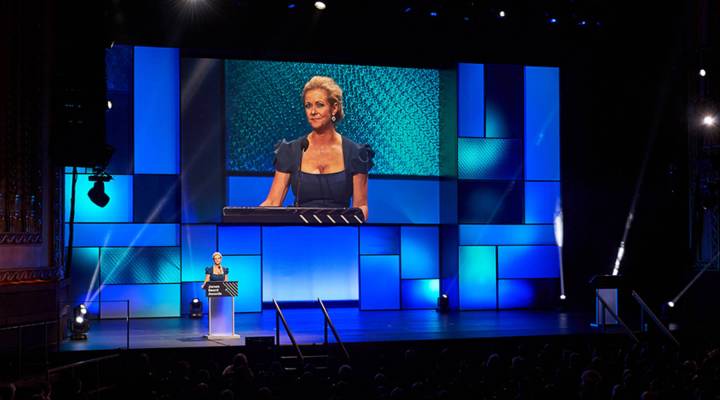 The James Beard Awards, sometimes referred to as the Oscars for chefs, restaurants, and cookbook writers, took place earlier this month in Chicago. It was a notable year for the awards because the winners included more women and people of color than ever before, something the restaurant industry celebrated months after a series of high-profile chefs were alleged to have abused staff, especially female staff, in the wake of the #MeToo movement.

This was also the first James Beard Awards for the new CEO of the James Beard Foundation, Clare Reichenbach. She spoke with Marketplace host Kai Ryssdal about the simple way they encouraged the judges who voted on the awards to think about the nominees and her plans for the future of the foundation. The following is an edited transcript of their conversation.

Kai Ryssdal: I do want to talk about the awards here in a bit because they’re important and they’re relevant, but I want to talk for a second about you, just to sort of frame it. You don’t come from food as it were. You come from television and media.

Clare Reichenbach: I come from the media world, yes I don’t hail from the culinary world per se and my background is more in terms of business strategy and business transformation which obviously has applicability but I’m a very authentic food lover and home cook at heart. So it’s an area of deep passion of mine. But as you say, I’m not the usual suspect in terms of stepping into this role.

Ryssdal: Was the James Beard Foundation then in need of strategy and a little bit of guidance I guess?

Reichenbach: Well I’m lucky to be stepping into the foundation at a time when it is the greatest strength it’s ever been. There’s a phenomenal team here and the evolution over the last few decades has really brought it to the position it’s at now. But I think the area that I really want to bolster and shine a greater light on — we’ve got some very powerful initiatives. One is around sustainable seafood which has a national ratings system whereby we work with chefs and restaurants in terms of looking at how they can change their supplies to a more sustainable supply. Another example would be our efforts towards food waste reduction, again a critically important area. So that’s a couple of examples of  what we’re doing in terms of the impact side of the house as it were.

Ryssdal: So let’s talk about the awards for a second. One of the reasons other than the fact that there are the James Beard awards, they’ve got a lot of press this year was that for the first time there was a substantial coterie of people of color and women winning which is great. My question for you though is how do you keep that up next year?

Reichenbach: And that is the question. And I think it’s worth saying that diversity has been a core component of our mission at the Foundation for years. At the beginning of the nomination process we introduced a new yardstick in terms of character and conduct. And you could really see that come to bear this year. So I think it’s about saying “progress has been has been made. Let’s not rest on our laurels. Let’s make sure that we build on this.” But fundamentally it’s about saying “what is the role for the foundation in terms of driving that systemic change to ensure that the culinary community and the restaurant industry is at its heart more inclusive and diverse and not just that the awards are reflective of that but it’s actually materially shifting?”

Ryssdal: To that question of systemic problems and the word you keep using which is conduct, the restaurant industry writ large has been and is still a very very difficult place for women to work. There are outstanding examples and I use that not in the good sense, of horrible incidents. What is your role and what can you do as one of the leaders of the culture I suppose, to make the restaurant industry more receptive and open for women?

Reichenbach: I think there are a number of things that again that the foundation is already doing but I’m deeply impassioned about really putting our shoulder against this and driving a scale impact what we do. But one is shining a light on the exemplars that we can start to kind of build a playbook around what good looks like. The second piece is around really equipping women in a very pragmatic way. So we think that actually women owners, so as well as chefs but really restaurant owners, that is where a lot of the systemic and institutional change will be driven from. So that is an area that is a key priority for us.

Reichenbach: I think I’m no different from — I think it’s the whole experience and the ambiance but I think people and I included are taking a deeper look in terms of where we are electing to spend our money because our choices around food have an impact. And I think people are increasingly aware of that.