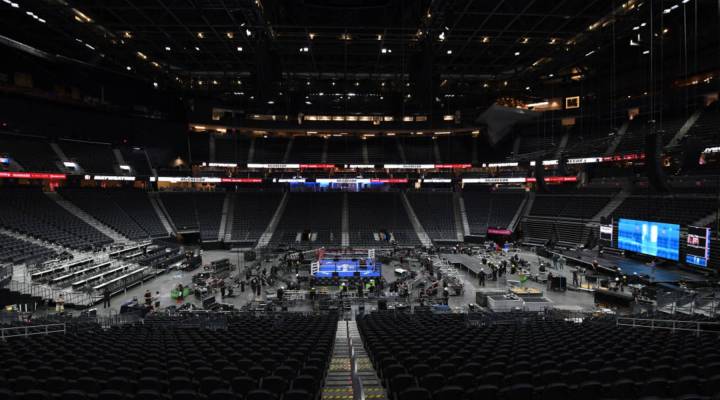 COPY
Workers set up at T-Mobile Arena ahead of the weigh-in and bout between boxer Floyd Mayweather Jr. and UFC lightweight champion Conor McGregor on August 24, 2017 in Las Vegas, Nevada. The fighters will meet in a super welterweight boxing match at the arena on August 26. Ethan Miller/Getty Images

Workers set up at T-Mobile Arena ahead of the weigh-in and bout between boxer Floyd Mayweather Jr. and UFC lightweight champion Conor McGregor on August 24, 2017 in Las Vegas, Nevada. The fighters will meet in a super welterweight boxing match at the arena on August 26. Ethan Miller/Getty Images
Listen Now

Fans of boxing and mixed martial arts will tell you that pay-per-view is expensive, but it comes with being a combat sports fan.

So, how did pay-per-view get to where we just accept it?

The first fight broadcast through pay-per-view was the “Thrilla in Manilla,” the third Muhammad Ali vs. Joe Frazier match in 1975. But, Darren Rovell, a sports business analyst at ESPN, said pay-per-view didn’t really take off until the late 1980s and early 90s.

“The genesis of it was when Tyson and Holyfield were doing their thing,” Rovell said.

Prices for professional boxing matches in 1994 ranged from $25 to $35. Annual pay-per-view fight revenue amounted to $413 million that year, less than the Mayweather vs. McGregor fight will likely make on Saturday alone.

The pay-per-view model has endured, and become even more integral to the way we watch combat sports, Rovell said, even if it costs $100 nowadays.

“Recently UFC has confirmed the fact that this is just how it is,” he said.

Industry watchers speculate every sport will move to a pay-per-view model eventually. Sports fans will pay $0.99 for, say, the last two minutes of a football game, the way you buy a song on iTunes.

Joe Hand runs a promotion company that distributes pay-per-view events to bars and restaurants throughout the United States. He’s 81, and remembers watching prize fights in movie theaters. He said he thinks Americans will be buying all their sports through pay-per-view before too long.

“I’m 81 years old, so I’ll probably never see it, but I wouldn’t be surprised, in fact I predict that the NFL and places like that will be on pay-per-view,” Hand said.

But does that mean the Super Bowl will eventually be pay-per-view?

Rovell said that’s because Fox, CBS, NBC and ESPN pay billions of dollars for the rights to broadcast NFL games, and they’re going to want the right to broadcast a Super Bowl as part of the package.