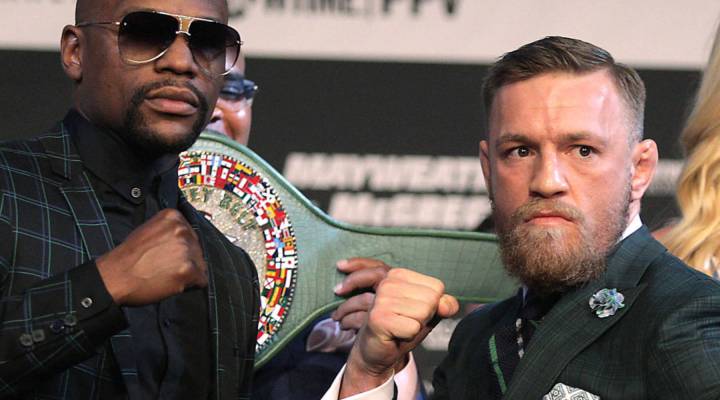 The term prize fight is likely going to need a tweak after Mayweather vs. McGregor on Saturday night. If you ponied up $100 for the Showtime pay-per-view, you weren’t alone. Revenue numbers are likely to eclipse the fight a couple of years ago that featured Mayweather and Manny Pacquiao. That 2015 fight generated more than half a billion dollars and was the highest grossing fight in history. So, how does Floyd Mayweather always seems to be in the middle of these ridiculously lucrative fights?

Darren Rovell, a sports business analyst at ESPN, reminds us that his nickname is “Money.” Floyd “Money” Mayweather.

“Listen, this is guy who only loves to talk about money,” Rovell said. “How much this fight is about cash is hilarious.”

Like most prize fighters, Mayweather’s trying to sell everything. His team wanted a total of $15 million for six advertising slots on his shorts, $3.5 million for a place on his waistband, and $1 million to be on his robe.

Rovell said the initial asking price for title sponsorship of the fight was $10 million, but he suspects the fight’s main sponsor, Corona beer, didn’t pay anywhere near that.

“They probably got three and a half,” he said.

Another disappointment could be ticket revenue. Hard core boxing fans will happily splurge on a boxing title fight. Martial arts fans will spend big on a title event in their sport. But the Mayweather vs. McGregor match features a 40-year-old retired boxer fighting someone with zero professional boxing bouts under his belt.

“So it’s a middling event as far as the ticket goes,” Rovell said. “Because it’s not a must-see for either crowd.”

But it is a must-see on pay-per-view and that’s where most of the revenue from this fight will be raised. At one hundred bucks a pop, early estimates come in at more than $400 million.

David Haas in Austin, Texas, is a big fan of combat sports and said he wasn’t phased by the Mayweather vs. McGregor price tag because he wanted to see a good fight.

“I was going to go to a friend’s house and then it turns out he was going to be out of town,” Haas said. “Then it was not even a question for me, I’m buying the fight.”

Haas said a bunch of friends will come over to his place to watch and they’ll bring beers or snacks or throw him a few dollars to offset the expense.

Like Haas, millions will watch the fight at home. Others will watch at a public venue like a sports bar.

Joe Hand is 81 years old and runs a business that distributes fights to bars, Joe Hand Promotions. He said he’s never seen anything like this.

The two guys in the ring for this event are going to be paid handsomely. ESPN’s Rovell said the purse is likely to be at least $300 million. The exact split won’t be revealed, but reports suggest it could be as high as 75-25 in Floyd “Money” Mayweather’s favor.