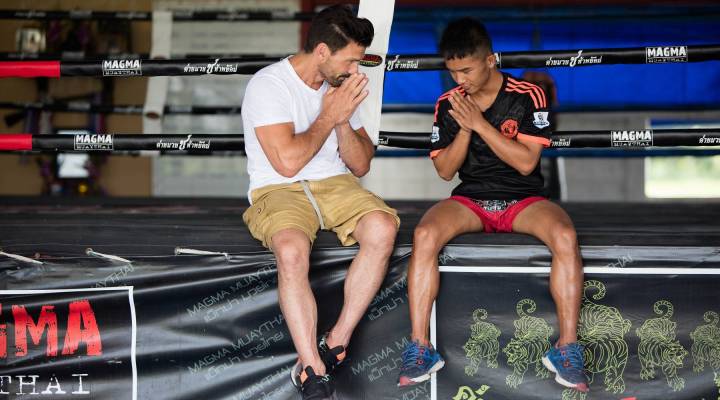 “Fightworld,” a new Netflix docuseries, explores different kinds of combat sports around the world. Fighting styles, like Muay Thai in Thailand and Krav Maga in Israel, were shaped in part by the economies of the places they developed in. Frank Grillo, creator and host of the show, is an actor known best for his roles in “The Purge,” “The Grey” and the Marvel Cinematic Universe, describes himself a “lifelong fight enthusiast.” He talked with Marketplace’s Molly Wood about the series, the waning popularity of boxing in the United States and Stan Lee. The following is an edited transcript of their conversation.

Molly Wood: So you are clearly delighted throughout the series so many times to be interacting with these trainers and these boxers that you clearly admire. What is it that you like so much about fighting?

Frank Grillo: I think most of all it is the camaraderie, the brother and sisterhood of fighting. It kind of transcends race and religion and economic background, and you know, fighting is about truth. One place in the world you can’t make believe is in a ring or in a cage or on a mat. And so you know it’s an honest, authentic pursuit of something that is primordial. And we all have it in us.

Wood: I mean, in this series, it seems very clear that the economics of the places that you visited have really shaped the fight cultures there.

Grillo: Yes. Absolutely. Any true fight culture, whether it’s Julio Cesar Chavez, one of the greatest boxers out of Mexico of all time, or one of the warriors in Africa or Buakaw, who is the greatest Muay Thai fighter in Thailand, they all came from the same thing, which was extreme levels of poverty. And they were fighting not for fame at the time, they’re literally fighting for their lives and for the lives of their families.

Wood: It’s interesting because it feels like a little bit of a mixed message, right? On the one hand, you’re saying that it’s beauty and camaraderie. On the other hand, there’s a bit of a message that fighting can come from desperation.

Grillo: And that’s kind of like the genesis of the idea of the show is to kind of demystify what people think about fighters. Because when you really get to know fighters, so many of them are spiritual or they’re so humble, and, you know, they fight for a living. And so they don’t walk around the streets looking for fights. They’re probably the least apt to get into a fight. You know, that’s what I wanted to show an audience is how beautiful the fight cultures around the world really are.

Wood: Well, yeah, I mean, I guess the sort of obvious push-back question here — and, like, Frank, I’m a mom — I mean, it’s really violent!

Grillo: It is. And I’m a dad, I have three sons. My oldest son, who’s 21, is about to fight. He’s, you know, he’s in college. And I’m looking at him, and he’s really good and he’s a good athlete. I’m looking at him and I’m saying, like, “After this, you’re done. Like, you don’t need to do this.” And that’s what I tell people. If there’s not some crazy calling you have in your body that makes you want to be a professional fighter, then don’t go near it. It hurts a lot to get hit.

Wood: Boxing, of course, used to be a huge cultural influence in America. It is on the decline a bit as a mainstream sport. HBO actually just dropped it last month. Is this series, with boxing on the decline, with this whole conversation about football and violent sports, is there a possibility that it’s a love letter but also a goodbye?

Grillo: No, I don’t think boxing is going anywhere. I think the popularity of the [Ultimate Fighting Championship] is just kind of, you know, it’s kind of taken a little bit of the gloss off of boxing. And, you know, HBO has been known for many, many years to be kind of like the go-to place for the best fighters in the world. But you know, it all ebbs and flows. It goes through cycles.

Wood: All right, this is a side note, but I want to ask you before I let you go, you have been a member of the Marvel family, which, of course, just lost Stan Lee. And I was wondering what you guys are all feeling about that?

Grillo: You know, real sadness. And listen, I’m a secondary, maybe a tertiary character in that world, but I’m in that world and I’ve spent a lot of time on those sets. And Stan was always there. He knew everyone’s name. I’ve been all over the world, and what people recognize most of all are the Marvel characters, and that’s Mr. Stan Lee.