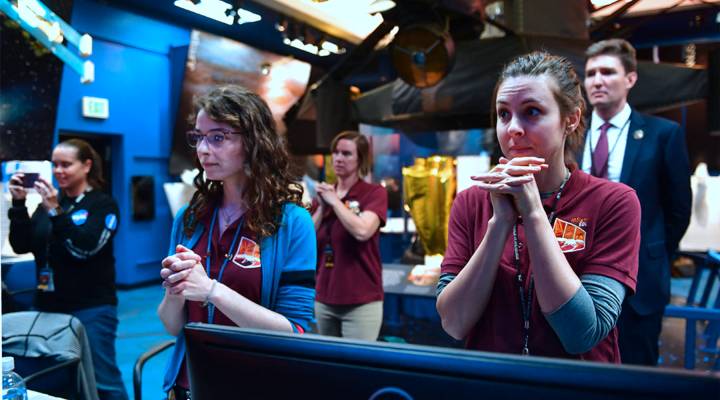 If you’re a space nerd like me, it’s a big week. Scientists are expected to announce the first-ever telescope images of a black hole “event horizon” — that is the point where all the dust and matter and light and everything gets sucked into the super-gravitational pull.

I will be watching the whole thing on Twitter and so will millions of others because, if you didn’t know, NASA is amazing at social media. It has one of the biggest footprints on Twitter, it has won several Webby awards and its coverage of the Cassini space probe crashing into Saturn’s atmosphere won an Emmy.

Not long ago, I visited NASA’s Jet Propulsion Lab, or JPL, to talk digital media. From mission control, data flows to and from all the spacecraft that are out beyond the moon in deep space.

Marketplace’s Molly Wood visited the Deep Space Network at JPL. “We like to affectionately call this room the Center of the Universe,” says Veronica McGregor, who runs media relations for JPL.

Veronica McGregor:  You probably recognize the room over here because, if you watched Curiosity landing or InSight landing, this is where those teams sat and they were jumping up and down.

Molly Wood: This is where the viral cheering happens?

McGregor says the agency’s 1958 federal charter says it has to get information about its programs to the widest possible audience. Today that’s social media.

She came to NASA after a career in news as a producer for CNN, and said she launched JPL’s social media in response to changes in the news business.

McGregor: At the same time that social media was ramping up, we were seeing a ramping down of newspapers, and in particular science coverage in newspapers. A lot of people who had been covering us for years were being bought out or laid off. So for us, we were jumping into kind of filling the void and being able to make all of our information available directly to the public.

But McGregor said it can sometimes be uncomfortable for NASA’s scientists and engineers to share their process with the public, warts and all.

McGregor: When we put a 360-degree camera inside our mission control room during our most recent Mars landing, that was a huge risk. I might have this camera sitting right next to someone’s face when they’re learning that a mission they’ve worked on for years is not going to work. But to us, it’s worth it.

Wood: But it must be important on some level to have the public on board to say, “Please keep funding NASA.”

Not only did McGregor start the lab’s first Twitter account, she’s the person who tweeted in first person as the Phoenix lander when it went to Mars back in 2008. I was following the Phoenix lander at the time, and, spoiler alert, it died. It was heartbreaking, and I just had to ask McGregor about it. Here’s how that conversation went:

Wood: So, I have been told, and I was following this from the beginning in real time, that you were the person who started tweeting as Phoenix on Twitter.

McGregor: Yes, that was me. Phoenix was a lander, and it went to the north polar region of Mars. It had a very limited lifespan because it was solar powered and the season was going to change. We knew that. So it had a lot of work to do in a very short amount of time. And we, I was looking for a way that I could get the word out directly to the public about landing night, because we were landing on Sunday night of Memorial Day weekend. And who’s watching news then, right?

So I really wanted to be able to get the information about landing directly to people’s mobile devices. Twitter was very new at the time. I opened up an account called Mars Phoenix, and we started posting about three weeks before landing. I played with it a little bit to see how people would engage with it. And I found that when I did it in the first person, everybody sent back questions or they started cheering the lander and saying, “You go, buddy.” And they got very excited for it. But if I did it as “the Phoenix lander will do this on Mars,” no real engagement. So it was all done just to get that conversation going.

And then we landed beautifully. We had five months of exploration. Phoenix discovered ice under the surface of Mars. That was one of the biggest tweets ever. It’s still listed on Twitter’s list of the top 10 tweets of all time, when we discovered water ice on Mars. Eventually that mission came to an end and it was done. It was a very difficult moment. There was a lot of grief. It was very difficult to say goodbye, and I had to do it in the first person. Since I really couldn’t after the fact say “I’m gone,” we sort of got people used to the idea that the mission would come to an end and that Phoenix would be a monument on Mars forever. Then, after we knew we had no more signals from Phoenix, I did the final tweet in binary code. I just waited to see how quickly people would translate the binary code and send it back. And it was just two seconds.

Wood: Can you remind us what it said?

Wood: I’m gonna cry again, this is what a giant nerd I am. I will say I may have cursed you a tiny bit at the time for being so cruel in creating this character in the first person. People got so attached.

McGregor: Yeah, they really did. That mission was so groundbreaking in discovering the appetite the public had for more information from us and opening up that first direct channel. Today, it’s almost, you can take it for granted that you can tweet to NASA or you can tweet to NASA JPL, and you’re going to get an answer on a question. But back then, that was amazing and groundbreaking and it hadn’t been really available before. We learned a lot. We learned what the public was looking for.

Wood: Veronica, that’s so cool. I can’t believe I got to talk to Phoenix, in person.

McGregor: I can’t believe I found someone who followed from the beginning. This is so great.