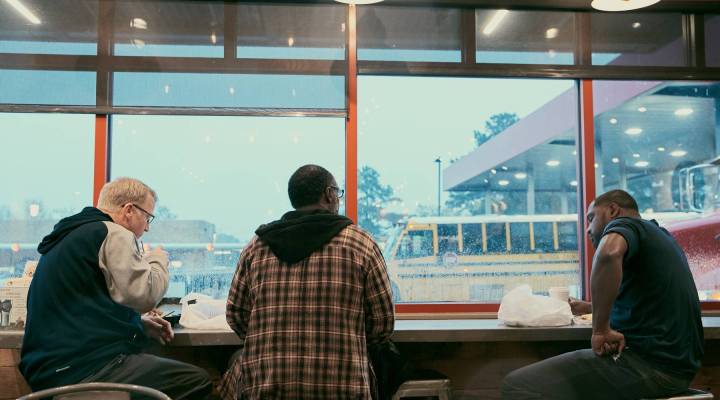 In certain places, workers can view labor rights as civil rights — places like Mississippi, where divisive issues of race and equality are steeped in history.

At the Nissan auto assembly plant in Canton, Mississippi, permanent workers make up to $25 dollars an hour, they told Marketplace. Temps start at $13 an hour. Hundreds, if not thousands, of workers at the plant are temps hired by contract firms, according to current and former workers, and local academic economists. Nissan said it does not comment on the specifics of contract workers.

“They work side by side, dress the same, do their jobs,” said Antonio Ivy, a former temp who now works a permanent job at the Nissan plant. “And I think they deserve more.”

Ivy worked for two years as a temp before being promoted to a permanent Nissan worker. Many workers spend years as temps without a change in status, according to current and former temps interviewed by Marketplace.

A large percentage of the Nissan factory workers are African-American (workers Marketplace spoke to estimate the rate is 80 percent; Nissan notes “more than 70 percent of Nissan Canton’s workforce is diverse.”) The notion of “second-class” workers prompts strong emotions form workers in a state with a long history of Civil Rights struggles that continue today.”

“It reminds me of the slave mentality,” said Eric Hearn, another former temp who is now a permanent employee. “When you take advantage of poor people, that’s where my problem comes in.”

Both Hearn and Ivy openly advocate for higher wages at the plant and a workers’ union. And both frame their efforts as part of a longer fight for equality in the Deep South.

Much of the state’s history of African-Americans seeking equal access is on display at the Civil Rights Museum in Jackson. Just past exhibits commemorating the lives of Emmett Till, a 14-year-old African-American boy who was lynched, and slain NAACP activist Medgar Evers, stands a display on equal pay for equal work.

In 1948, Mississippi teacher Gladys Noel Bates sued the school board in Jackson. The case, prepared by then-NAACP attorney Thurgood Marshall, argued black teachers made less than half the wages of their white peers. The city made the salaries equal three years later.

Many black workers had trouble finding jobs at all. “Medgar Evers had to write a letter to then-President Eisenhower about the factories that were in Mississippi that were not hiring black people,” said Frank Figgers, a local activist associated with the local chapter of the NAACP.

“We had a lot of problems in Mississippi in the South during the Civil Rights movement, when people just did not want to go against the grain,” Parks said. “But you had a few that stood up against it to better everybody else.”

But Scott Waller, the head of the Mississippi Economic Council, which is the state’s chamber of commerce, sees nothing unfair about the auto industry in Mississippi. He sees those jobs — temps and permanent — as major progress for the state.

“Initially we were really an agrarian society in Mississippi,” Waller said. “And then in the ‘60s and ‘70s we kind of were a textile mill-type manufacturing facility. A lot of low-wage, low-skill type jobs.”

The next step in the economic evolution came in 2003, with the arrival of the Nissan auto plant, followed by a Toyota factory and an entire auto and industrial supply chain.

“The advanced manufacturing you’re seeing is the result of things like Nissan and the suppliers and the other automotive industry that’s throughout the state,” Waller said. The new industrial era has raised the wage floor across the Canton/Jackson metropolitan area, Waller said.

As for the differential in pay between temporary and permanent workers at the Nissan plant, Waller said the same dynamic exists in every sector: entry-level workers begin at a lower level, and make more if they prove themselves.

“You don’t come in and start a job that you’ve never worked before and make the exact same thing that somebody who has worked there for 15 years is making,” Waller said. “You’ve got to view it [as] more of the opportunity.”

Nissan argues that the plant provides competitive wages and good benefits. “We value all these jobs,” said Rodney Francis, director of human resources at the Nissan plant in Canton. “We pay them all well, you know.”

This sentiment was echoed by several attendees at the Mississippi State Fair in Jackson.

“It is better than similar places, if you’ve got that background,” said Blake Haas, of the Jackson suburb of Flowood. “I came out of college making $18 an hour. I went four years, only to make four dollars an hour, so that’s pretty good.”

“That’s probably the highest paying in this area, I would say, with just that education,” said Taylor George, an engineer at the Nissan plant who lives in nearby Clinton, Mississippi.

In a way, this is a debate between the notion of good pay versus equal pay. And how a person views history helps frame which side he or she is on.