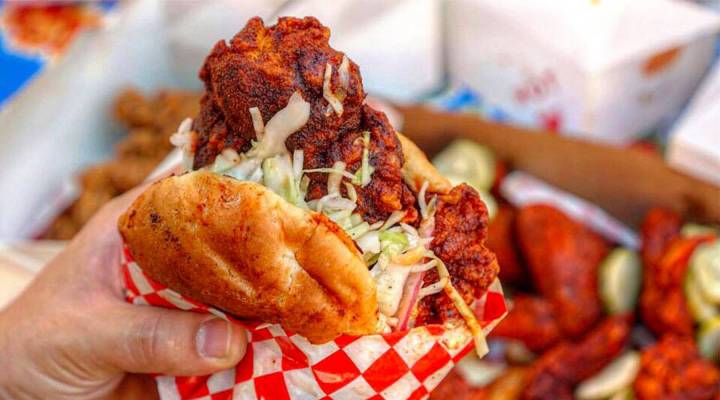 Howlin’ Ray’s in Los Angeles has brought Nashville-style hot chicken to the West Coast, and it’s a pretty big deal here. Marketplace host Adriene Hill visited chef and owner Johnny Zone at the bustling spot, where the kitchen staff prepares hundreds of hot chicken plates and “sandos,” or sandwiches, an hour before opening time. Meanwhile, a line of people wraps around the building, waiting for the doors to open. When they do, the wait can last more than two hours. It’s enough to bring tears to your eyes, or is that the cayenne pepper? An edited transcript of the conversation follows.

Johnny Zone: So we’re at Howlin’ Ray’s here in Chinatown in the Far East Plaza. We serve Nashville hot chicken here to the masses, 11 a.m. to 4 p.m., Wednesday through Sunday.

Adriene Hill: We’re at about 10:15 right now, and you guys have hundreds of orders? What’s going on?

Zone: Yeah, so in order to alleviate some of the stress on the line, we noticed in the beginning when we first opened that the big orders would really kind of chock up the line and make the line a little bit longer. So we started doing some of the bigger orders in the mornings. You can book it out. It’s about a month out right now to book an order.

Hill: Whoa, so if I want to order Howlin’ Ray’s for my workplace a month from now, you can get it to me?

Zone: Yeah. And it’s for 10 or more, that’s the minimum requirement on it. Like, we’re cooking for the Dodgers today for 40 sando’s for them. We do pretty large orders. It’s gone past 10 people on the pre-orders.

Hill: So you’ve got a monthlong wait for group orders. You’ve got a line out here that’s growing, and again, it’s only 10:30. What explains, do you think, the popularity of this, of what you’re doing?

Zone: I don’t know, I think it kind of just caught on, and I also think there’s an opening in the market in the sense of really high-quality fried chicken. And in terms of, like, normal restaurant rules, we’re not really following those.

Customers wait outside for Howlin’ Ray’s to open.

Hill: What do you mean?

Zone: Obviously there’s no storefront to the street, right? We’re only open five hours a day. Our food costs are a little bit higher than normal. We are closed two days a week.

Hill: How are you confident enough to open a restaurant, breaking all those rules? I mean there’s got to have been a moment where you were like, should we really be closed for two days? Should we really only be open for five hours a day?

Zone: So I named this business after my dad who passed away, his name was Ray Zone. He did 3-D comic books and stuff like that. And when that happened, it was kind of like one of those “f*** it” moments. Like, screw it. I opened this with credit cards and a loan for my wife’s car, unsecured. So the cool thing about unsecured loans is you can use that money for other things. And so I was kind of like, “I want to do this.” We could have extended the hours, and that was the plan, but because so many people just kept showing up and orders just kept rolling in, we were unable to expand the current operation without more space. So that’s what we’re working on next. We’re taking over next door and expanding the space so that we can open another day and more hours.

Zone: I mean, I’ve been a chef for 12 years. So I was cooking French food. I was a butcher for Nobu Matsuhisa, just butchering fish in the morning. I worked for Thomas Keller and Gordon Ramsay, as well. So a lot of French background and stuff. But when I had hot chicken in Nashville, I was doing a stage over at Sean Brock’s place Husk, and I just fell in love with it. I was like, “This is the perfect dish.” I want to bring this to L.A. I feel like there’s not a lot of opportunities in life where you can say, “I’m gonna bring something to Los Angeles.”

Howlin’ Ray’s kitchen staff prepare pre-orders that were submitted one month in advance.

Hill: I hear there’s another Nashville hot chicken shop that’s opened up nearby. How has that affected you guys? Has it?

Zone: Yeah, but honestly, it’s awesome that there’s so much love for hot chicken. And I’m so confident in our product and our team. If they get inspiration from us, and they want to open up something similar, or like when we see on their Instagram that they plate it exactly how we plate it, that’s awesome. That means we’re doing something right and we’re ahead of the curve. And, in fact, we actually promote those restaurants.

Hill: Why promote them?

Zone: Why promote them? Because L.A. is full of people who are quick to hate. And the restaurant industry is too hard. So you want to be supportive of people doing something they’re passionate about even if it stems from something you’re doing. Don’t be a hater, you know, support people.

When we got back, Adriene and Tommy tried some of Zone’s hottest chicken. You can hear how that went below.