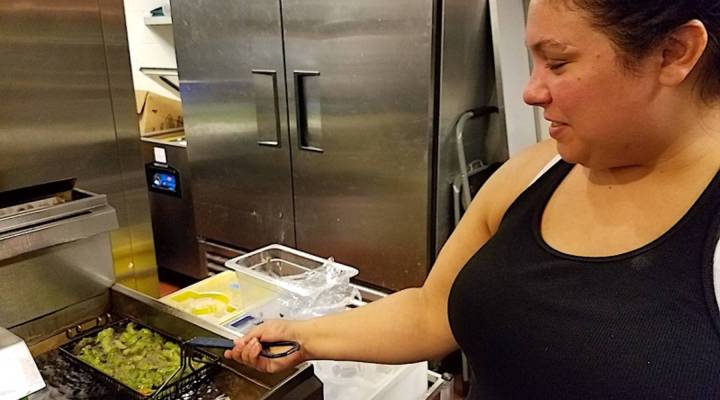 In the back of Two Ten Jack restaurant in East Nashville, Tennessee, chef and owner Jess Benefield lowers a basket of small peppers into a vat of hot oil.  These are shishitos, a Japanese pepper with just the right balance of sweetness and spiciness.

Most are mild. “We say, like every one out of 10 is hot. When you get a hot one, it’s kind of super-crazy hot,” Benefield said.

Diners never know for sure whether they’re going to bite into a hot one or not, which is one reason this is among the most popular items at Two Ten Jack, a cozy, rustic-looking noodle house tucked in the rear of a trendy shopping center.

But keeping shishitos on the menu has been hard. It’s possible to find them in Asian supermarkets and to order them from restaurant supply companies. But Benefield says those sources aren’t always dependable. Or the peppers are low-quality. Or they may have been shipped thousands of miles.

“So anything that we can get that’s similar here, and that people are familiar with growing — it makes a lot of sense,” Benefield said.

That’s where a program called Growing Together comes in. Now in its third season, Growing Together is connecting hip restaurants with a group that has firsthand experience growing those crops normally found abroad — refugees. The program has grown up in response to Nashville’s flourishing food scene which has nourished an explosion of styles and flavors. Finding the ingredients for those creative dishes is often a challenge for chefs.

Organized by the Nashville Food Project, Growing Together is located on the outskirts of Nashville, where a community garden has been set up on the remnant of a church baseball field.

Refugees from Bhutan and Burma work plots in a community garden that sells to Nashville farmer’s markets and restaurants.

Chandra Poudel is tending his plot at Growing Together. Poudel grew up in Bhutan but was forced out in the 1990s by an ethnic purge. For two decades after that, he lived in a refugee camp in Nepal. Then, the camps shut down, forcing him to resettle in Nashville four years ago.

Farming is the only profession he’s ever known.

“Being a farmer is the best thing to me,” he said through a translator. “And I like working, you know.”

Poudel strolls along his rows, pointing out the crops. Some are plants he grew in Bhutan. He said he tended just over 5 acres there on a farm that turned out potatoes by the ton.

Other crops are entirely new to him, including some destined for Two Ten Jack. Last year, the garden agreed to supply the restaurant with a steady stream of ingredients — including Japanese essentials like shishitos, daikon radishes and a leafy green called komatsuna.

Poudel is pleased with how this year’s crop is going.

Chandra Poudel and translator Siddi Rimal, who is also a refugee from Bhutan, examine his crops in the Growing Together community garden.

This produce is organic and grown to Two Ten Jack’s specifications. The restaurant even provided the seeds to get just the variety of shishito it wanted.

Growing Together charges Two Ten Jack $6 a pound for shishitos. The restaurant has paid anywhere from $5 to $13 a pound from other suppliers.

The growers also raise food for their own use and to sell at a local farmer’s market, said Lauren Bailey, the Growing Together program’s manager.

“It’s a mix of trying to highlight things that they know how to grow really well and things that might be new to them that Nashville and American customers might be more used to.”

Bailey said Growing Together was modeled after similar programs in other cities, including a thriving community farm for refugees in the Atlanta area.

Nashville’s program is still in its early stages. There are eight farmers, and they each get 1,200 to 2,400 square feet. That’s smaller than a tennis court and, Bailey admits, not enough land for farmers to earn a living.

Growing Together would like to acquire more space, but as it stands, she said, participants do get a chance to work, practice English, earn a little money and build confidence.

“We’re able to sort of highlight a skill they bring to the United States and … give restaurants access to locally grown food.”

And diners get more bite from their shishito peppers.