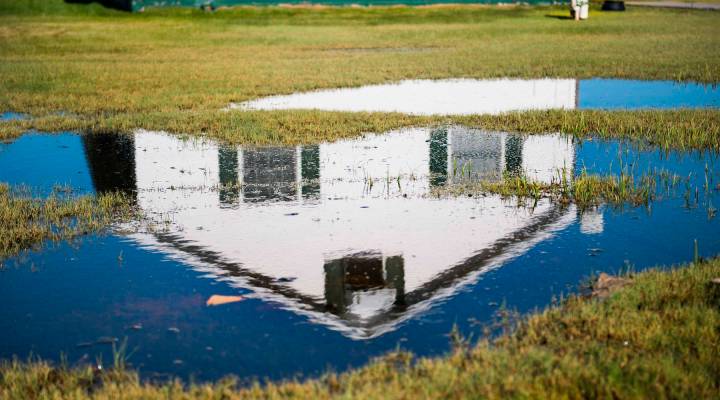 COPY
Swamp grass and standing water take over the front yard of a home in Tangier, Virginia, May 15, 2017, where climate change and rising sea levels threaten the inhabitants of the slowly sinking island. Jim Watson / Getty Images

Swamp grass and standing water take over the front yard of a home in Tangier, Virginia, May 15, 2017, where climate change and rising sea levels threaten the inhabitants of the slowly sinking island. Jim Watson / Getty Images
Listen Now

A new study in the journal Science deals with the financial impacts that unchecked climate change would have on the United States. It finds for each degree Fahrenheit increase, there’ll be a 0.7 percent hit to gross domestic product. In some poorer parts of the country, that can jump to 20 percent.

The study looks at how higher temperatures, increased flooding and sea level rise would affect things like agriculture, mortality and crime. There’s a nationwide impact, but it’s much bigger in hotter regions, which tend to be poorer, according to Robert Kopp, one of the study’s authors and director of the Institute of Earth, Ocean and Atmospheric Sciences at Rutgers University.

“Even if you have a way to manage those risks, it’s going to be more costly to do those in the areas where the risks are larger,” he said. “And so climate change sets up this factor that will enhance inequality in our country.”

Craig Fugate, a former Federal Emergency Management Agency administrator, said that insurers and investors aren’t currently factoring in climate change when they look at these areas. And that’s encouraging people to keep building in places that are vulnerable.

“I haven’t seen anybody’s bond rating being affected based upon their risk to storm surge increasing, flood risk, heavy rainfalls,” Fugate said. “And their tax bases are increasingly becoming more vulnerable to these changes.”

But the effects of climate change will eventually catch up with the land value in these areas.

“Probably, if you’re in a county where you have a 20 percent hit to GDP, a lot of people are going to move, and so for those counties, the effect may be even worse, because people are going to respond to this risk by moving, which will moderate the national impact but exaggerate it locally,” Kopp said.

The team behind the research is now looking to apply its model on a global scale.