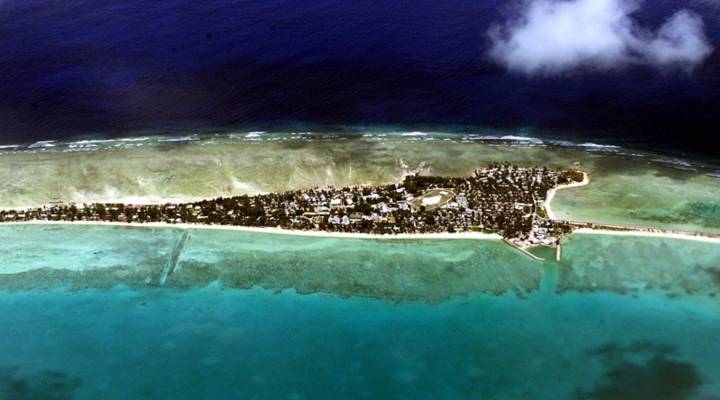 COPY
Tarawa atoll, capital of the archipelago nation of Kiribati, in 2001. The islands are expected to be mostly submerged within 100 years. Torsten Blackwood/AFP/Getty Images

Tarawa atoll, capital of the archipelago nation of Kiribati, in 2001. The islands are expected to be mostly submerged within 100 years. Torsten Blackwood/AFP/Getty Images
Listen Now

International climate talks continue this week in Bonn, Germany. But the actual host nation for the United Nation annual conference is Fiji, and it’s the first time an island nation facing dire impacts of climate change has held the symbolic leadership role. (Fiji could not afford the cost of hosting the event, which for past nations has run more than $100 million.) Fiji’s role is putting emphasis on the plight of island nations who stand to lose the most from climate change.

One of those nations is Kiribati, a series of islands in the South Pacific about halfway between Hawaii and Australia. Climate scientists have identified it as the first nation that will disappear as a result of sea level rise associated with climate change. The islands are expected to be mostly submerged within a hundred years and unlivable even earlier than that.

“We’ll be the first to go,” said Christine Zinnemann, honorary consul for Kiribati, based in Los Angeles. “There is no doubting that. It’s just a matter of when.”

Zinnemann was born and raised in Kiribati until the nation gained its independence from the United Kingdom in 1979. Now, as consul, she is looking for ways to ease the country’s inevitable relocation.

“Right now, the aim is to prepare our country for a migration with dignity,” Zinnemann said.

She wants to improve education, so that the Kiribati diaspora will be more welcomed by other countries. She also hopes to set up some kind of income for the 100,000 or so residents. Selling the island’s fishing rights may be a way to accomplish that. The nation’s waters teem with valuable tuna.

Legal experts have said without sovereign land, however, future fishing rights are unclear, because international law determines the boundaries of exclusive fishing zones based on distances from land. It’s not clear at this point what will happen to those rights once that land disappears.

“The assumption on which [fishing laws were] based was that sea level was basically stable, and knowing that that’s not true suggests the need to rework this,” said Holly Doremus, co-director of the Law of the Sea Institute at University of California, Berkeley.

That conversation has barely begun. Zinnemann said it’s just one issue of so many that must be worked out before her countrymen escape to other nations.

Other island nations, like Fiji, the Marshall Islands and Vanuatu, stand to lose a lot — or even all — of their land to rising water, despite emitting very little carbon themselves.

The U.N. has a Green Climate Fund, into which richer, more-polluting countries pay to help poorer countries adapt.

“That’s kind of the way the world’s set about trying to solve this, but it’s insufficient,” said oceanographer Gregory Stone.

Stone is a science adviser to Kiribati and part of its climate delegation. He said it’s important that other nations see climate aid as something other than a handout.

“It implies that they don’t have what it takes to get something done,” Stone said. “It’s more like they need justice.”

Justice could take the form of legal damages or reparations, but Stone said so far, that kind of arrangement hasn’t made it into formal U.N. agreements.