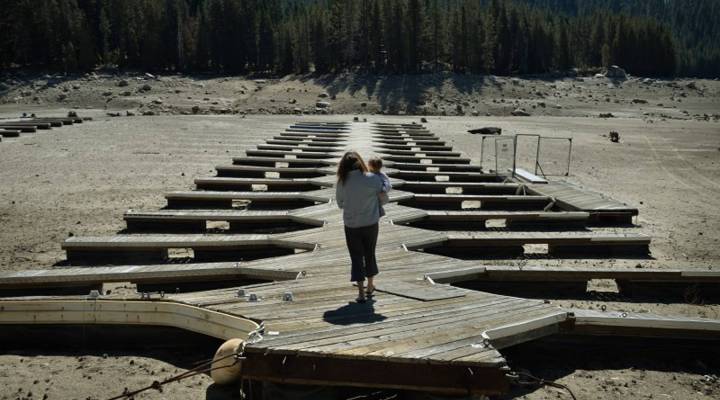 COPY
A boat dock is left in the dried bed of Huntington Lake, Californina, in 2014. A World Bank report says climate change could have a severe economic impact on some regions of the world. MARK RALSTON/AFP/Getty Images

A boat dock is left in the dried bed of Huntington Lake, Californina, in 2014. A World Bank report says climate change could have a severe economic impact on some regions of the world. MARK RALSTON/AFP/Getty Images
Listen Now

With record-breaking drought in the West juxtaposed against deadly flooding in Houston, the water cycle seems to be acting strangely. A new report out by the World Bank says water uncertainty is likely to extend into the future as a result of climate change.

If you’ve been having trouble getting your uncle or former college roommate to understand how climate change would affect them, you might find water availability to resonate more than atmospheric carbon or starving polar bears.

“Whether it’s droughts, whether it’s floods, whether it’s storms and cyclones or sea level rise, most of the deleterious, the bad impacts occur through the water cycle,” said Richard Damania, an economist at the World Bank and lead author of the study. “It’s probably no exaggeration to say that much of climate change is about change in the water cycle or the hydrological cycle and its impacts.”

As the planet warms, it will change how much water evaporates into the atmosphere and where it comes back down as rain.

Those impacts could have severe economic repercussions, especially for parts of Africa, Asia and the Middle East. Some areas could lose as much as 6 percent of their GDP by 2050, according to the report.

Potential losses can be reduced by improving water management. Getting there, though, requires significant political will. Peter Gleick, president of the Pacific Institute, said even the U.S. — which is undergoing a historic drought in the West — needs to learn how to conserve more.

“The system is getting better, but climate change requires that we do more faster. Water utilities still haven’t incorporated the idea of climate change into their planning and operations,” he said.

Other notable impacts from water uncertainty include increased conflicts.

“When you get a drought, or a massive flood, this becomes a threat multiplier, and what it tends to do is that it therefore ignites migration,” Damania said. “People go away from areas where you have problems, where you have drought, where you have no jobs, and that in turn often leads to regime change in the extreme and certainly can trigger civil war as well.”

Rather than seeing such conflicts as a Mad Max-esque apocalypse far off in the future, Damania said it’s important to realize water-exacerbated conflicts are already occurring.

“We see clear statistical evidence of this in Africa. We also see evidence of increased conflicts in parts of Asia and parts of Latin America as well,” he said.