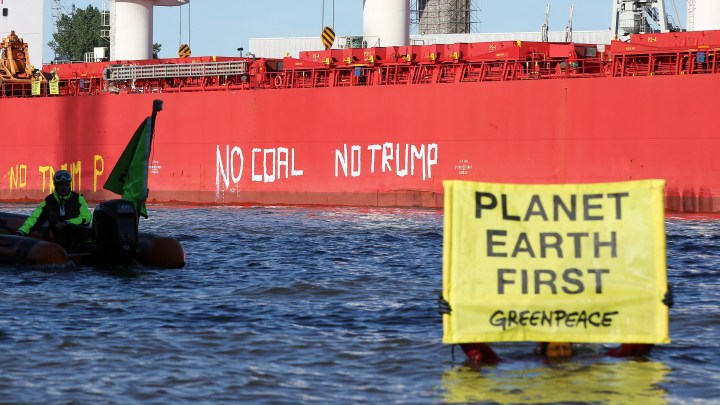 COPY
Greenpeace activists painted "No coal no Trump" on the side of a coal ship leaving Texas in 2017 after Trump said he would pull out of the Paris climate agreement. Bodo Marks/DPA/AFP via Getty Images

Greenpeace activists painted "No coal no Trump" on the side of a coal ship leaving Texas in 2017 after Trump said he would pull out of the Paris climate agreement. Bodo Marks/DPA/AFP via Getty Images
Listen Now

The United States is formally pulling out of the Paris climate agreement Wednesday, three years after President Donald Trump announced plans to do so. Trump said the multinational agreement to curb greenhouse gas emissions and combat climate change would be an economic disaster, costing as many as 2.7 million American jobs by 2025.

“Looking at the cost of climate action really is only one side of the coin, and it ignores the cost of inaction,” said Jason Bordoff, director of Columbia University’s Center on Global Energy Policy.

He said we’re seeing that cost every day in wildfires in California, hurricanes in the Gulf of Mexico and floods in the Midwest.

“The impacts of climate change are not just on polar bears 50 years from now,” Bordoff said. “They are on all of us, and our economy, and our agriculture, and more today.”

And as climate change worsens, Frances Moore, assistant professor of environmental science and policy at the University of California, Davis, said the U.S. gave up its seat at the table when it dropped out of the Paris Agreement.

“We’re affected by greenhouse gas emissions from other countries, right? We have a really large domestic interest in working with other countries to reduce those emissions,” she said.

Slowing climate change and adapting to it requires cross-border cooperation, even though many costs will be local. It’s what economists like Robert Stavins, professor of energy and economic development at Harvard University, call a global commons problem.

“Any individual jurisdiction taking action, whether it’s a country the size of the United States or it’s just a state, such as California, they incur the cost of taking action, but the benefits of those actions they’ve taken are spread globally,” he said.

And the benefits are also spread across industries.

He said in withdrawing from the Paris Agreement, the U.S. is ignoring those risks, missing out on economic opportunities and setting a bad example for the rest of the world.

“The thing about any international agreement is that we don’t have a global government. There isn’t some enforcer that can say ‘Thou shalt cut emissions,’” said Leah Stokes, assistant professor of political science at the University of California, Santa Barbara, and co-host of the climate change podcast, “A Matter of Degrees.”

And sometimes those domestic politics get in the way.