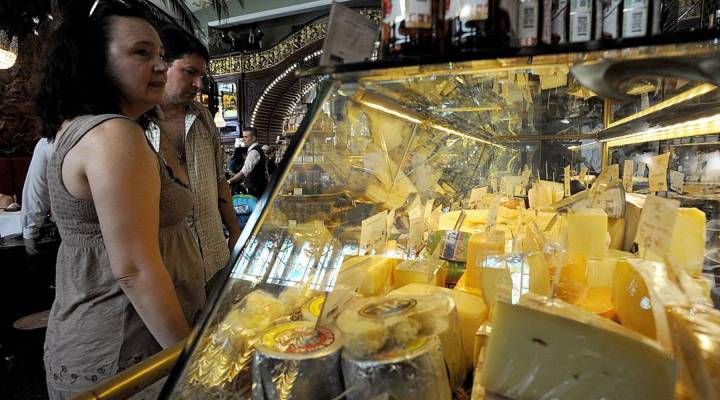 President Donald Trump got some bad news earlier this week — the U.S. trade deficit of $48.5 billion reached a five-year high in January. While economists do not believe that a trading deficit is a reason for concern, Trump has made it his administration’s mission to reduce it.

This means the U.S. will have to either increase its exports, reduce its imports or both. With implementation of tariffs, Trump could make imported products more expensive. He could impose sanctions and ban certain products from coming in. Besides trade policies, there are other factors — such as other countries’ trading policies, global cheese consumption and the strength or weakness of foreign currency — affecting global trade that Trump has little influence over.

There are dozens of countries that U.S. has trade relationships with; three that have contributed to the U.S. trade deficit are China, Russia and Mexico.

Here is a closer look at their relationships:

In January, trade between the U.S. and Russia resulted in a $907 million trade deficit for the U.S.

Despite sanctions imposed by the U.S. and Russia, trade between the two countries has not stopped completely. Russia continues to be one of U.S.’s oil and petroleum product suppliers.

Probably the best way to explain Russia’s trade policies and its impact is with cheese. Yes, cheese.

In a retaliation for sanctions imposed on Russia, President Vladimir Putin decided to impose sanctions of his own against goods imported from a number of countries, including the European Union, the U.S., Canada and Australia. The ban, which was imposed in August 2014, included products such as beef, pork, poultry, fruits, vegetables and dairy products.

In 2013, before the sanctions were imposed, Russia imported about 440,000 tons of cheese from Europe. After the sanctions, during the first 11 months of 2015, just 180,000 tons of cheese were imported by Russia, according to The Economist. That’s because farmers, encouraged by Putin to make the country self-sufficient, began making their own cheese.

Russia’s message to Europe was clear: Feel free to keep your stinky cheese, we will make our own.

And while the U.S. did not export many dairy products to Russia, it too was affected as the extra European cheese (previously consumed by Russians) flooded the global market. According to the U.S. Dairy Export Council, the products previously imported by Russia amounted to about 18,604 tons of cheese and 2,510 tons of butterfat per month.

“The competition caused by displaced European products is likely to remain intense,” the council said in 2015.

By June 2016, the U.S. found itself with 759 million pounds of surplus cheese (379,500 tons). That summer, the Department of Agriculture decided to purchase $20 million worth of cheese to help out the U. S. farmers.

A man wears a bandana made in China at a Trump rally in Erie, PA during the presidential campaign.

In January, trade between the U.S. and China resulted in a $31.3 billion trade deficit for the U.S.

Another U.S. trading partner is China, and if Trump has anything to say about it, that relationship will start to look quite different.

While campaigning, Trump accused China of being “the best ever” at currency manipulation (which was untrue) as well as of “raping” the U.S. with its trade policies.

His anti-China rhetoric has already had an effect on the country’s trade. In 2016, China saw its global trade surplus come in at $510 billion, down from $594 billion the year before. That is mainly due to a 7.7 percent drop in global exports, which has been attributed to an increase in anti-globalization rhetoric by certain public figures.

“The trend of anti-globalization is becoming increasingly evident, and China is the biggest victim of this trend,” Huang Songping, China’s customs spokesman, said in January. “We will pay close attention to foreign trade policy after Trump is inaugurated president.”

China is the largest supplier of imported goods to the U.S., including electronics ($133 billion), toys and sports equipment ($24 billion) and shoes ($17 billion).

In January of this year, trade with Mexico resulted in a $3.9 billion deficit for the U.S.

Another country whose trade relationship with the U.S. has troubled Trump is Mexico. A lot of the trade between the U.S. and our southern neighbor is passing car parts back and forth until cars are finished. The top three categories for both imports and exports between the two countries were machinery, electrical machinery and vehicles.

In 2015, the U.S. imported $78 billion worth of cars and auto parts from Mexico, which has more than 400 parts-producing plants. That year, the U.S. trade deficit with Mexico was $58 billion.

“Cars are by far the largest export from Mexico to the U.S. — without them, the [Mexican] trade surplus with the U.S. vanishes,” Neil Shearing, chief emerging markets economist at Capital Economics, told CNN.

For now, at least, the U.S. is still importing cars from Mexico.