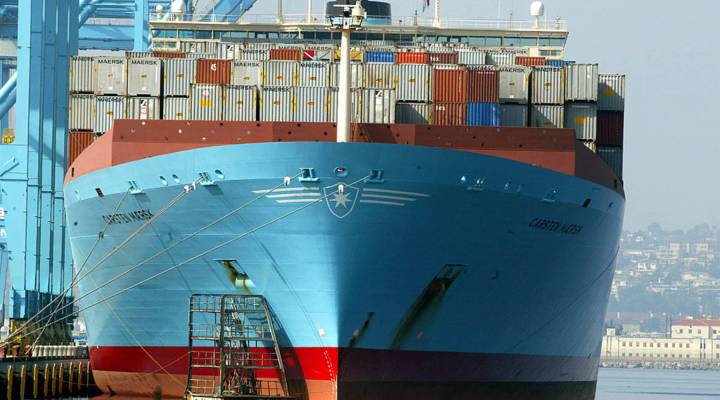 A cargo ship waits to be unloaded at the Port of Los Angeles in Long Beach. HECTOR MATA/AFP/Getty Images

A cargo ship waits to be unloaded at the Port of Los Angeles in Long Beach. HECTOR MATA/AFP/Getty Images

WASHINGTON (AP) — President Donald Trump talked tough on trade on the campaign trail, vowing to renegotiate a slew of major deals and to label China a currency manipulator on “Day One.” Now his administration appears to be taking a more cautious approach.

On Friday, the president will sign a pair of executive orders aimed at cracking down on trade abuses. The orders come a week before the president is scheduled to host President Xi Jinping of China at his estate in Florida. The U.S. has its highest trade deficit with China at $347 billion last year.

But Peter Navarro, director of the White House National Trade Council, insisted the orders had nothing to do with the visit and were not an attempt to send a message to China.

The first of the two orders Trump will sign calls for completion of a large-scale report to identify “every form of trade abuse and every non-reciprocal practice that now contributes to the U.S. trade deficit,” said Commerce Secretary Wilbur Ross. Officials will have 90 days to produce a country-by-country, product-by-product report that will serve as the basis of future decision-making by the administration on trade-related issues.

“It will demonstrate the administration’s intention not to hip-shoot, not to do anything casual, not to do anything abruptly, but to take a very measured and analytical approach, both to analyzing the problem and therefore to developing the solutions for it,” he said, describing the report as the first of its kind.

While Trump has long argued that trade deficits imperil U.S. workers, Ross cautioned that they aren’t necessarily all bad. In some cases, for instance, the U.S. simply can’t produce enough of a product to meet domestic demand. In others, foreign countries may make products substantially cheaper or better than in the U.S. Deficits in trade can also mean that foreign countries and entities are investing in U.S. assets.

The report, Ross said, will examine whether deficits are being driven by things like cheating, specific trade obligations, lax enforcement and World Trade Organization rules.

Ross argued the U.S. has the lowest tariff rates of any developed country. But a World Bank report contradicts that claim: The report found that the weighted average U.S. tariff in 2012 was 1.6 percent. That is below the global average, but it’s still higher than countries in the European Union such as Germany and France, as well as Singapore and Hong Kong, which both have average rates of zero.

Ross said the report would not focus extensively on currency manipulation, which is under the purview of the U.S. Treasury Department, despite Trump’s campaign rhetoric.

The second order will focus on stepping up the collection of anti-dumping and countervailing duties, which are levied against foreign governments that subsidize products so they can be sold below cost.

Navarro said the U.S. is leaving billions of dollars on the table as a result of lax enforcement of commitments in trade pacts. The order will establish more effective bonding requirements, among other measures.

Trump tweeted Thursday evening that his first meeting with the Chinese leader would “be a very difficult one in that we can no longer have massive trade deficits … and job losses.”

“American companies must be prepared to look at other alternatives,” he wrote.

But Navarro declined to comment, insisting, “We’re not here for tweets.”

The U.S. trade deficit totaled $502.3 billion last year, a slight increase from 2015, according to the Commerce Department. The trade gap rose to its highest level since 2012 last year, though the imbalance remains below its 2006 high, shortly before the Great Recession struck.

Trump has portrayed trade deficits as strangling economic growth and devastating factory jobs at home. Research last year by academic economists, including David Autor of the Massachusetts Institute of Technology, found that China’s emergence hurt some communities and they have yet to fully recover.

But foreign trade has also helped reduce prices for clothing, cars and furniture, among other items. This has created savings for U.S. consumers.

While economists concede the benefits of trade can be uneven, they argue the job losses that Trump blames on trade pacts can largely be attributed to automation. A study released this week by the National Bureau of Economic Research estimates that robots account for up to 670,000 lost factory jobs between 1990 and 2007.

Both exports abroad and imports into the United States fell in 2016, but exports declined by a greater sum in part due to a stronger dollar making American-made goods and services more expensive overseas.