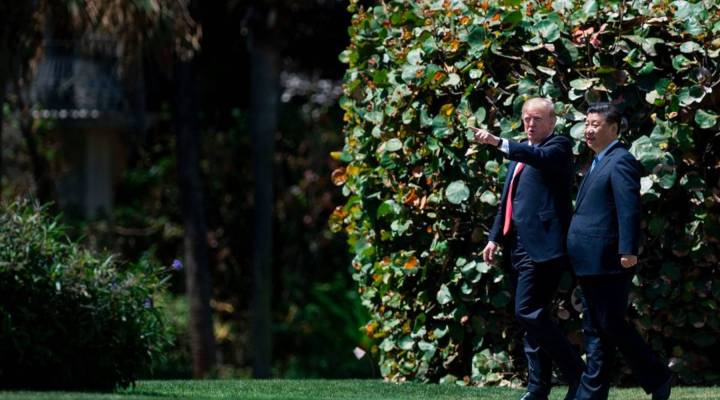 PALM BEACH, Fla. (AP) — President Trump said Friday he has developed an “outstanding” relationship with Chinese President Xi Jinping after meeting with the leader, who Trump has previously criticized as a menace to the United States.

The widely anticipated meeting of the leaders of the world’s two largest economies was largely overshadowed by the U.S. missile strikes at Syria. Those strikes added weight to Trump’s threat last week to act unilaterally against North Korea’s weapons program.

Trump said in a brief appearance before reporters that he and Xi made “tremendous progress” in their first face-to-face talks and that he believes “lots of very potentially bad problems will be going away.”

He did not elaborate on the progress or the problems. But the two days of talks at Trump’s private estate in Florida were expected to focus on what Trump has described as China’s unfair trade practices and inadequate efforts to halt North Korea’s nuclear weapons and missile program.

Xi said the delegations covered important topics and have established a good friendship and working relationship. He said he believes the U.S. and China can continue to develop the relationship, noting that it’s the historic responsibility of both countries to work toward peace and stability.

The U.S. announced the missile barrage shortly after Trump and Xi wrapped up dinner yesterday. The strikes were retaliation against Syrian President Bashar Assad for a chemical weapons attack against civilians caught up in his country’s long civil war.

China has sided with Russia at the United Nations in opposing condemnation of Assad’s government but has not become directly involved in the conflict.

Today, China’s Foreign Ministry spokeswoman Hua Chunying said China opposed the use of chemical weapons by any party under any circumstances but didn’t comment on the U.S. attack.

The timing of the attack could send a message to the Chinese. Trump told the Financial Times in the days before Xi’s arrival that he is prepared to go it alone on North Korea if China doesn’t work with the U.S. to crack down on North Korea’s nuclear program

Military options against North Korea are much riskier than those against Syria. It has already tested nuclear weapons, and South Korea’s capital, Seoul, is in range of North Korean artillery.

Taking action against North Korea has been a sticking point in U.S. talks with the Chinese. China is North Korea’s most important ally and trading partner, and a significant source of its weapons, food and energy.

Before yesterday’s dinner, Trump said he and Xi already had had a long discussion and had “developed a friendship,” and then joked, “I have gotten nothing, absolutely nothing.”

However, Xi apparently got something out of dinner. Chinese state media reported late yesterday that Trump has accepted Xi’s invitation to visit China this year. The official Xinhua News Agency said Trump will travel to China at an “early date” in 2017, but gave no details.

The White House downplayed expectations for a breakthrough on issues like trade and tariffs, insisting that the 24-hour summit is mostly an introductory meeting for the two leaders. Within Trump’s administration, divisions remain over how to approach China.

As a candidate and president, Trump has taken an aggressive posture toward China, labeling Beijing a “tremendous problem” and arguing that lopsided trade deals with China shortchange American businesses and workers. Last week, the president tweeted that his meeting with Xi would be “very difficult.”

He also last week signed a pair of executive orders focused on reducing the U.S. trade deficit, an apparent shot at China, which accounted for the vast bulk  — $347 billion — of last year’s $502 billion trade deficit.

Speaking to reporters while traveling to Florida, Trump suggested a link between “terrible” trade agreements the U.S. has made with China and Pyongyang’s provocations. He said the two issues “really do mix.”

While Trump would not say what he wants China to do specifically, he said he thinks China will “want to be stepping up” on the North Korea issue.

Xi was expected to seek assurances that Trump will not interfere in the territorial dispute over the South China Sea or question the “One China” policy by reaching out to Taiwan’s leader again, as Trump did during the transition.