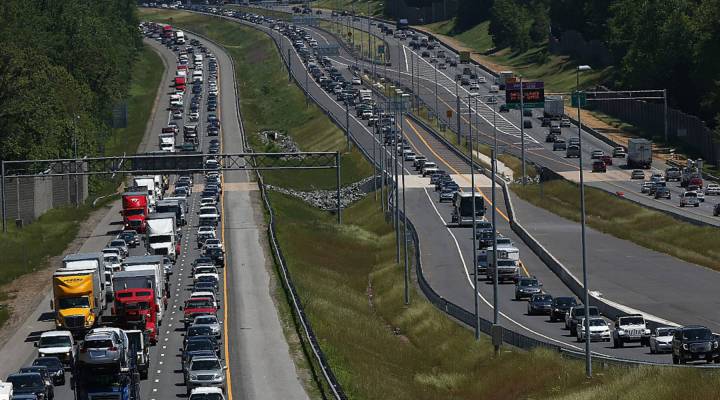 The U.S. earned a D+ on its infrastructure in an American Society of Civil Engineers report released today.

The American Infrastructure Report Card looks at 16 different categories of the government that make up the infrastructure Americans use on a daily basis. Then, over a span of four years, the ASCE grades them.

Casey Dinges, senior managing director for the ASCE, said he doesn’t think Americans will be surprised about the low grade, “because the public has to experience the impact of this grade of D+ on a daily basis,” like a congested highway or “worrying about a dam or levee that could break nearby.”

The ASCE considers a B+ an adequate grade. If the country could raise that D+ to a B by 2025, it would cost over $4.5 trillion, according to the report.

“Since 1998, the grades have been near failing, averaging only Ds,” according to the report.

The sector suffering the most is transit, chiefly public transit. New York, Philadelphia, Boston and Chicago are all target cities in need of serious investments. Dinges said Washington, D.C.’s, metro is no different.

“In the nation’s capitol, we’ve seen major issues,” he said. It’s only a 40-year-old system, but without dedicated maintenance, problems will continue.

“But we are seeing areas of improvement,” Dinges said. “LA is using a self-imposed sales tax to make investments. We’ve seen Seattle and Denver with big transit investments.” Programs at the state and city level can do a lot to turn a D grade into a C, and maybe into a B.

Our nation’s 900 ports made some improvements, nudging their grade from a C to C+. This is important — 99 percent of trade passes through them and accounts for more than one quarter of our gross domestic product. Ports like those in Los Angeles and Long Beach are adapting to bigger ships coming from the newly renovated Panama Canal.

Rail saw the most improvement. The industry turned its C+ into a B, mostly because of good economic planning. While the country wrestled with the Great Recession, the largely privately owned freight rail industry took advantage of historically low interest rates. In the last four years, it invested an average of $20 billion or more a year in infrastructure.

Underinvesting in our nation’s infrastructure will end up costing American families more than $3,000 a year, or an average of $9 a day, according to the report. That dollar amount signifies a drag on the economy that comes from all the complications of a dilapidated infrastructure.

Those $9 a day could come in the form of additional car maintenance from all those potholes we drive over or a jump in the price of goods due to a bottleneck on freight lines in another state.

“But for just $3 a day, we could address that drag,” Dinges said.

In order to pull our grade up to a B, the ASCE laid out three main recommendations: investment, leadership and planning, and preparing for the future.

“While our nation’s infrastructure problems are significant, they are solvable,” ASCE President Norma Jean Mattei said. The ASCE recommended raising the national gas tax, which hasn’t been adjusted since 1993. That tax could cover half of the investment gap for our nation’s infrastructure. What’s more, the ASCE said 90 percent of gas taxes return to state coffers for things like road repair and maintenance.

The ASCE is also keeping an eye out for President Donald Trump’s 2018 budget. It will be looking for existing programs that the president can ask Congress to fund, either through discretionary spending or a new infrastructure bill.