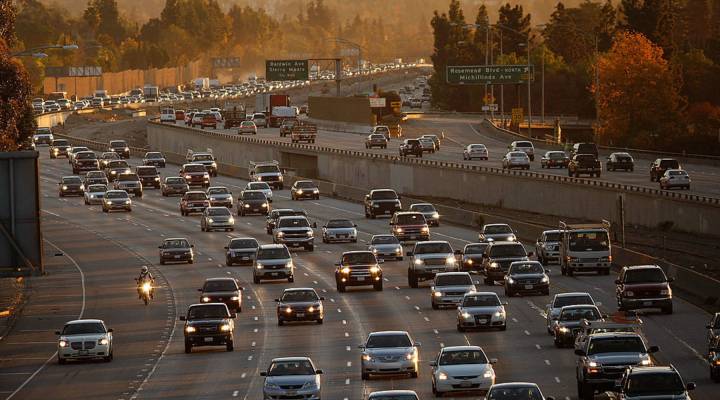 COPY
Morning commuters travel the 210 freeway between Los Angeles and cities to the east near Pasadena. David McNew/Getty Images

Morning commuters travel the 210 freeway between Los Angeles and cities to the east near Pasadena. David McNew/Getty Images
Listen Now

President Trump has spent the whole week talking about his infrastructure plan. Lots of countries build their roads and bridges with money from overseas — including Australia, Canada and many countries in Europe. It’s been less common in the U.S., though Saudi Arabia recently pledged $20 billion for American projects. Marketplace has partnered with the investigative team at APM Reports to track infrastructure spending.

Overseas money is already in American infrastructure. Pension funds from Australia and Canada, private European investors and Middle Eastern Sovereign Wealth Funds — similar to the Saudis’ — own roads and bridges across the U.S. The Chicago skyway, the Dulles Greenway in Virginia and State Highway 130 in Texas are just a few examples.

Tom Carr is with Preqin, a London data research firm. He said the question is not whether the U.S. could or should attract foreign money for infrastructure. “It’s more of whether we’re going to see a real explosion going forward is the way I would look at it,” he said.

Carr said private investors are actively looking for projects to spend on in North America. There’s $71 billion of private money, worldwide, lined up and waiting to be invested — not including the $20 billion Saudi pledge.

It’ll take all that’s readily available — and a lot more — to meet President Trump’s goals for infrastructure. His plans hinge on $800 billion in private money. Carr said it’s hard to imagine all that will come from the U.S.

“It seems likely to have to reach the levels that we’ve been talking about, some foreign investment will be needed. And as we said we’ve already seen with the Saudi’s foreign investments and starting to come in as well,” Carr said.

Funding projects with foreign money means overseas firms would profit from Trump’s plan. But that’s not the main concern of Oregon Democrat Peter DeFazio, of the House Transportation and Infrastructure Committee. He doesn’t want overseas interests to influence decisions about roads and bridges.

“I don’t want to be held hostage to them in the future,” DeFazio said. “These foreign interests getting involved in our public infrastructure should be of tremendous concern.”

DeFazio would rather raise the gas tax than allow investors to raise tolls and fees.

John Schmidt is an attorney who’s negotiated billions of dollars in infrastructure deals in Chicago, Texas and Indiana, all of which included foreign investors. He said this is the way the world works, “because privatized operation of infrastructure has developed around the world and not in this country.” He said most of the major infrastructure operators are foreign. He said the U.S. definitely benefits from foreign infrastructure investment, since the projects get built — and are built with American workers.