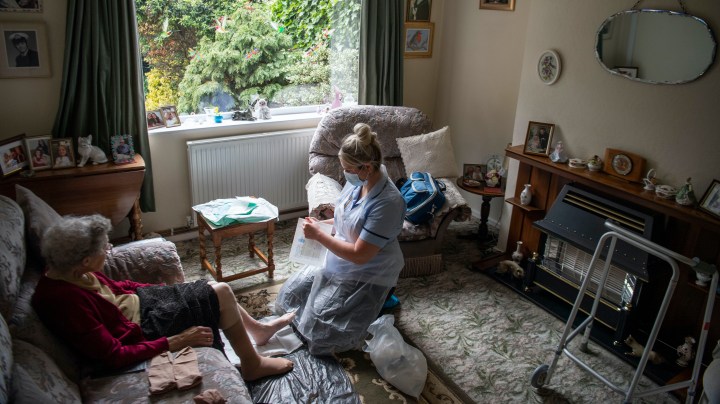 The Weak Link: The state of infrastructure

COPY
Baby boomers are retiring at a rate of 10,000 people per day, according to the U.S. Census Bureau. Daniel Leal-Olivas-Pool/Getty Images
The Weak Link: The state of infrastructure

Baby boomers are retiring at a rate of 10,000 people per day, according to the U.S. Census Bureau. Daniel Leal-Olivas-Pool/Getty Images
Listen Now

The Biden administration rolled out its infrastructure proposal, the American Jobs Plan, Wednesday. It calls for about $2 trillion worth of investment into roads and bridges, updating the electric grid and building out green energy infrastructure.

But the proposal takes an expansive view of just what’s meant by “infrastructure.”

“As a matter of policy coming out of the White House, this is not a surprise, just simply the vehicle in which it’s contained at the moment,” said Bill Dombi, president of the National Association for Home Care & Hospice.

Putting health care into an infrastructure package is unusual, he said, but he hopes it works “to address the very low level of compensation that many home care aides receive.”

“Although I love my work and what I do in home care, it really doesn’t pay enough,” said Terrell Cannon. Cannon has worked for decades in home health care, where the median salary is just above the poverty line. Now she’s director of training at Home Care Associates of Philadelphia.

She said she understands why home health care shows up in the Biden plan.

“Just like the roads and the streets and the energy and things of that nature that’s there, we should have been because we are the essential workers that keep the quality of life going,” Cannon said.

But having such a broad concept of infrastructure could make it harder to pass a bill, according to Diana Furchtgott-Roth, who teaches at George Washington University and worked at the Transportation Department during the Trump administration.

“I think that there are going to be people who are going to want to break it up into different kinds of bills,” Furchtgott-Roth said.

It’s hard to be against an infrastructure bill, she said, but it could be easier for some lawmakers to oppose, say, a climate change bill. Or one to pay home health care workers higher salaries.