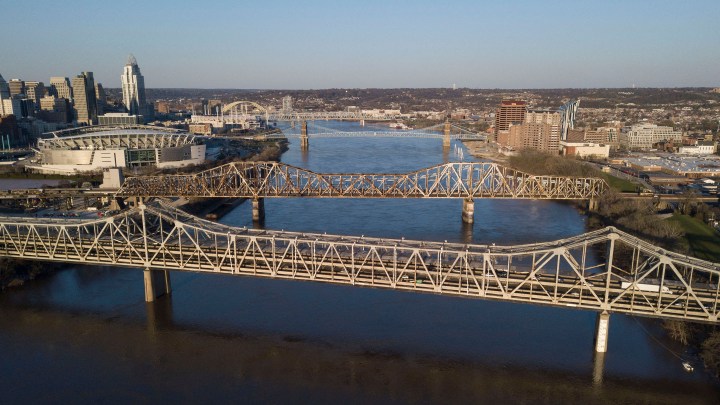 COPY
One bridge in the worst shape? The Brent Spence Bridge, which spans the Ohio River and was declared functionally obsolete in the 1990s. Jeff Dean/AFP via Getty Images

One bridge in the worst shape? The Brent Spence Bridge, which spans the Ohio River and was declared functionally obsolete in the 1990s. Jeff Dean/AFP via Getty Images
Listen Now

President Joe Biden’s infrastructure plan calls for fixing for 20,000 miles of roads and 10,000 bridges. When Biden made his big infrastructure speech last week in Pittsburgh, he singled out a group of bridges in dire need of reconstruction. He made the list sound pretty urgent.

“We got 10 of the most economically significant bridges with more commerce going across it that need to be replaced,” said Biden, while touting his $2 trillion push to modernize the connective tissue of the country’s economy.

But the administration has neglected to pinpoint which 10 bridges they have in mind.

“I wouldn’t be hard pressed to find 10 bridges. I mean, I would have 50 or 100 finalists,” said Maria Lehman, who advises the American Society of Civil Engineers.

According to the ASCE’s most recent infrastructure report card, about 46,000 bridges in the U.S. are in bad shape, and they’re part of a national traffic jam that costs the country tens of billions in lost productivity each year.

But which bridges are the worst of the worst?

Those that in the poorest condition, have the highest volume of freight traffic and are critical for interstate transport, according to Lehman.

The administration has indicated it will call on states to submit applications explaining why their bridge is most deserving of federal attention. If you’re reading this in southwest Ohio or northern Kentucky, you’re probably nodding your head eagerly right now.

The Brent Spence Bridge spans the Ohio River, connecting Kentucky and Cincinnati. It was declared functionally obsolete in the 1990s.

Paul Lewis, vice president for policy and finance at the Eno Center for Transportation, said the Brent Spence occupies a special place among the constituents of Senate Minority Leader Mitch McConnell, just like the bad bridges on I-95 in Pennsylvania matter a lot to Democratic Sen. Bob Casey’s voters.

“Perhaps that’s why they didn’t name which of the 10 bridges are actually going to be in there,” Lewis said. “Because it’s not just a decision-making process from a needs standpoint. There’s a political component, too.”

That includes environmental politics. The president also wants to go big on electric vehicles, which could make his bridge repair goals more expensive.

“The more we get into electric vehicles, they’re heavier,” Lehman said. “If you do that on a truck, it’s a lot heavier. So you’ve got to think about all those things when you move forward, because when you build a bridge you want it to be there for another 50 to 100 years.”