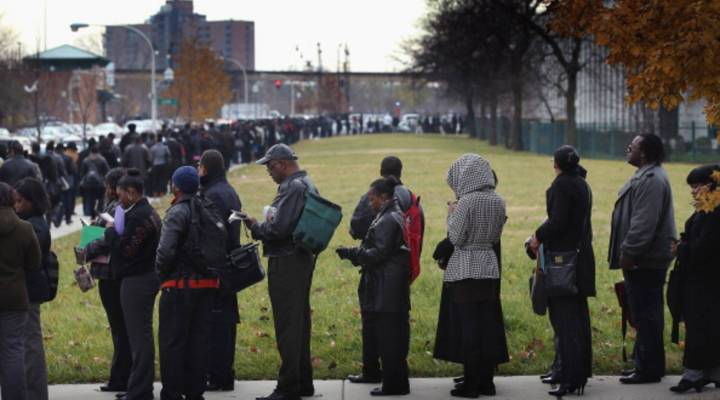 The National Urban League is out with its latest annual assessment of equality in America. This year’s “State of Black America” report, titled “Protect Our Progress,” finds African-Americans are still well behind white Americans when it comes to equality. According to the organization’s equality index — which takes into account economic, health, education, social justice, and civic engagement measures — African-Americans have 72.3 percent of the pie white Americans have. Hispanic-Americans have 78.4 percent.

The report does not find a big increase or decrease in equality overall since last year. Though African-Americans made modest gains in education and health, these were off-set largely by declines in social justice equality over the past year.

Marc Morial, president of the National Urban League and former mayor of New Orleans, joined Marketplace Morning Report host David Brancaccio to discuss the report. Below is an edited transcript.

Marc Morial: We still see wide disparities between blacks and whites, and we see disparities between Latinos and whites. We’ve noted in this year’s report that when it comes to education and health, those disparities have slightly narrowed. Not significantly, but I think it’s important whenever there is a narrowing — because change comes over time — that we in fact note those changes.

David Brancaccio: Mr. Morial, Marketplace and Edison Research just did a scientific public opinion survey, and among the things it found is that 83 percent of Americans support major infrastructure initiative in America. That fits into something that you’re finding as well, something that you’re calling for?

Morial: So, it’s bigger than some of the plans that have been out there. The president has talked about a trillion. We think a trillion is not enough. The American Society of Civil Engineers have talked about $4 trillion [in physical infrastructure], that’s a big, ambitious leap. By doing that, we can create jobs if it’s done right, meaning there’s a job training component to it. It doesn’t just focus on big marquee projects like fancy bridges and highways but also on community facilities.. You could get something that would be a real game changer in this country.

To see a full breakdown of the report, including city rankings of equality, visit the National Urban League’s website.