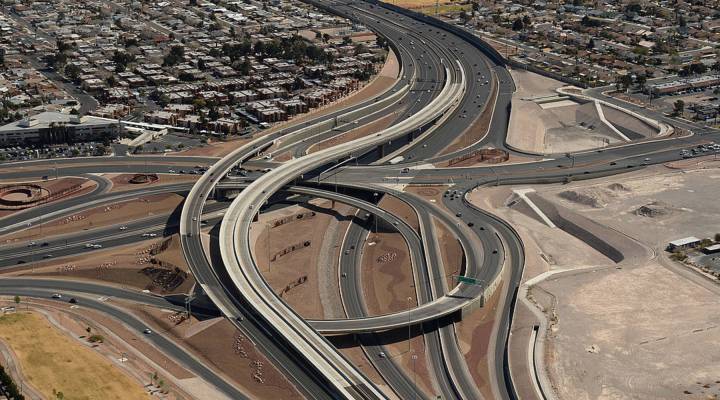 Eighty-three percent of respondents to our Marketplace-Edison Research Poll told us they support the idea of Congress passing a large infrastructure bill to repair roads, bridges and airports. Ethan Miller/Getty Images
Listen Now

Sixty-four-year-old Taylor Rickard is giving me a guided tour of her worst nightmare. We’re driving along the Rappahannock River in Fredericksburg, Virginia, under a bridge Rickard said is about 75 years old and showing its age.

“Look at the rust,” Rickard said, pointing. “And look at the patches on the concrete. And that’s what we’re supposedly trusting our lives with.”

Rickard took our poll. And you’ve probably guessed how she answered our question on infrastructure. She was among the 83 percent of respondents who told us they support the idea of Congress passing a large infrastructure bill to repair roads, bridges and airports. Rickard wants to start with rail, highways and, yes, the bridges spanning the Rappahannock, which she drives over a couple of times a week.

“One of these days, one of these bridges is going to give in,” she said.

Turns out, lots of people are worried about rusty bridges and crumbling highways.

The Pew Research Center has been polling Americans on infrastructure for years. In 2013, 38 percent of the people it surveyed would spend more on highways, bridges and roads.  This year, 58 percent wanted to invest in infrastructure.

“A 20 percentage-point shift on infrastructure certainly does signal that there’s some appetite for spending in this area,” said Jocelyn Kiley, the center’s associate director.

“One of these days, one of these bridges is going to give in,” says Taylor Rickard, an IT consultant.

What to spend on first? I turned to the American Society of Civil Engineers for that. Greg DiLoreto is chair of the society’s committee on infrastructure. I asked him to list his top three infrastructure priorities.

“It would be nice if it could be that easy,” he told me.

DiLoreto said infrastructure is interconnected. You can’t, say, fix wastewater treatment without improving the electrical grid that makes it run. DiLoreto said user fees need to go up for things like water and highways.

Back in Fredericksburg, Rickard said she’d pay a higher gas tax for better roads. The motivation behind Rickard’s devotion to infrastructure usually sits right behind her in a car seat.

“I have three grandchildren,” she said. “I would like to leave them with a legacy of a country that works properly.”

Rickard said she’s been worried about the bridges over the Rappahannock since her kids were in car seats.