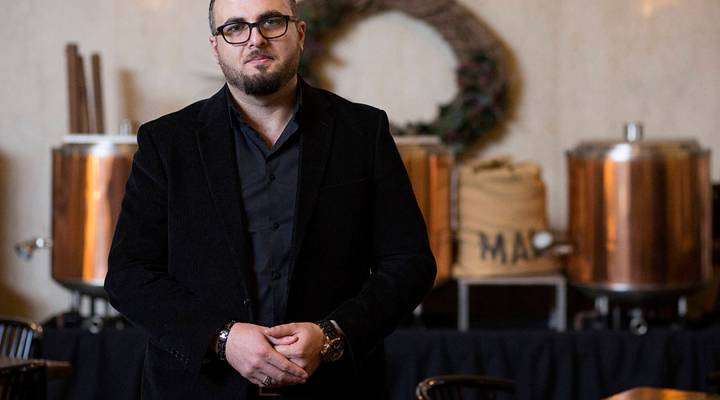 COPY
Bassam Dabbah is one of Erie's residents who immigrated from Jordan. Dabbah is now a proud American citizen. Maitham Basha-Agha/Marketplace
How The Deck Is Stacked

Bassam Dabbah is one of Erie's residents who immigrated from Jordan. Dabbah is now a proud American citizen. Maitham Basha-Agha/Marketplace
Listen Now

In small-town Erie, where the population hovers around 100,000, there has been an influx of new residents: immigrants. They make up 20 percent of the town’s population, and many are refugees. So President-elect Donald Trump’s promises to make sharp cuts in the number of immigrants in the U.S. has sparked fear in some people living and working here.

Bassam Dabbah is one of Erie’s residents who immigrated here from Jordan after leaving his native Syria. He’s an American citizen, “proudly!” he said.

Dabbah works as a translator and is also a small business owner. His wife, who’s from Israel, is a chef in town, and two of his four children were born in the U.S. The morning after the election, he said, his daughter woke up and asked him, “Dad, do we have to leave the country?”

“I told her, ‘No, you were born here. This is our home, we’re not leaving,” he said. “We’re hard workers, we have to flee our country, we don’t have choices —we’re not terrorists.”

Still, Dabbah said many in the immigrant community in Erie are fearful after the rhetoric of the campaign. “They are happy to have their children in a safe place, but don’t know what will happen tomorrow.”

Dylanna Jackson is a director of a resettlement program in Erie.

“The conversation is whether they’re going to be forced to leave or not,” said Dylanna Jackson. She’s director of the International Institute, a refugee resettlement agency in Erie. Jackson said community members in Erie have been supportive of her clients, volunteering their help in recent months.

But Jackson’s also worried about what the new administration’s policies could mean for her clients, and her agency. She said she’s worried that if fewer refugees come into the city, there won’t be as much need for the Institute’s services, endangering the jobs of her 200 staffers.