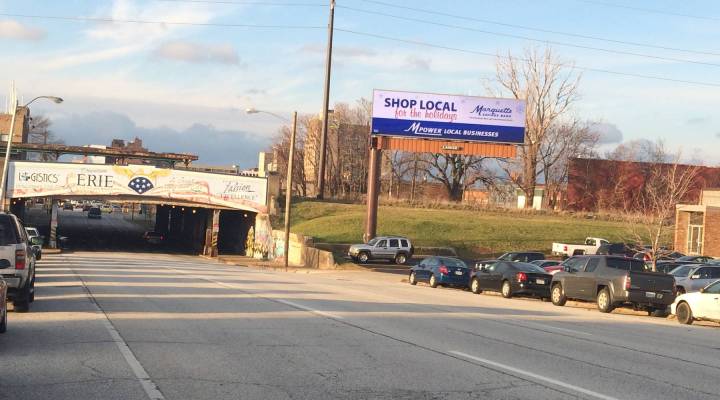 The Mayor wants Downtown Erie to become a place where millenials will live, walk to work and hang out on the waterfront. Daisy Palacios/Marketplace
The Big Promise

The Mayor wants Downtown Erie to become a place where millenials will live, walk to work and hang out on the waterfront. Daisy Palacios/Marketplace

As you may know from reading our ongoing coverage of Erie, Penn., the city of around 100,000 is divided between those who see the city’s economy as a glass half-empty situation and those who see the glass half-full. Someone who’s optimistic about Erie’s future is Mayor Joe Schember, who has only been in office a month, but has lived in Erie his entire life. Like other mayors in similar-sized cities across the country, Schember is counting on construction of new buildings and a vibrant downtown to bring life back to Erie’s economy. He talked with Marketplace host Kai Ryssdal about the challenges of getting residents on board. The following is an edited transcript of their conversation.

Kai Ryssdal: What is the biggest economic challenge you face in the city of Erie?

Joe Schember: Well, Erie has been losing jobs and population since the late 1960s, when we were around 140,000 population. We’re down under 100,000 now, about 97, 98,000. And so my number one priority is to bring more good, family-sustaining jobs to Erie. I think that’s the most important thing we need, and we need to turn that around, and I think we have a really unique opportunity right now to do that.

Ryssdal: One of the things the president said during his campaign was he was going to bring jobs back to towns like Erie. He talked manufacturing, specifically. Do you think that the president is capable of doing what you also say you need to do in the city of Erie?

Ryssdal: Where are the bright spots for you then, sir? Because what was for a long time the biggest employer in town, General Electric, has started pulling down. What’s the upside for you?

Schember: The upside is there’s all kinds of new construction planned and actually already started in Erie. For instance, we have a Fortune 500 company in town here: Erie Insurance Exchange. They just started building a new building maybe six or nine months ago. It’s going to take them a couple of years to build it. It will be the biggest building in downtown Erie ever constructed in my lifetime, and it’s going to bring 600 new jobs to downtown Erie. So one of the things I’m trying to do is encourage local developers to create more good market-rate housing downtown. Right now, we have a real shortage of market-rate housing. My vision for that is we need to have this housing so downtown Erie can be more like downtown Pittsburgh, where the millennials live and work, walk to work, walk to the restaurants. I want to create that kind of environment in downtown Erie.

Ryssdal: Since you mentioned your lifetime, sir, I should note here that you raised your kids in the house that you grew up in. You’ve been in Erie your whole life, you worked at the same company, PNC Bank, for 40-something years. Why did Erie change so much? What happened between when you were a kid and today?

Schember: You know, we are a Rust Belt town, and I think what happened to us isn’t unique, it happened throughout the Rust Belt. Some cities have been quicker in recovering than we’ve been. But again I think we have this opportunity now to really accelerate this recovery. I actually feel lucky that I got elected mayor at this point in time. And I mentioned Erie Insurance, that’s like a $135 million project. There’s a total of $600 million in projects in downtown Erie that have been announced. Our hospitals are building new buildings. We’re getting new development on the bay front, which is one of our unique strengths we’ve never capitalized on, and something that can attract people here. It can be a great place for our residents to live, work and play. So I’m really excited about the opportunity, and what I’m trying to do is make sure we get the most out of all this opportunity we have right now.

Ryssdal: So I’ve been in Erie probably four times over the past year, talked to a bunch of people. I was at the Polish Falcon about two days ago talking to people, and we’ve been walking around downtown talking to folks. They are not entirely happy with all the kinds of development that’s happening, right? Lots of big giveaways for the hotels and the convention centers and stuff down on the waterfront. And they’re not seeing the kind of growth that you’re talking about.

Schember: You know, what happened with the convention center — there is controversy about that — but it is state law what was done there in terms of the tax breaks they got. And to me, that’s the first major development we’ve had on our bay front. What we need now is some for-profit businesses down there. There’s a local restaurateur who’s announced that in the parking ramp down there he’s going to put a real unique restaurant. And I’m anxious for that because that will be the first for-profit thing down there. And he’s got three or four restaurants around town, they’re all popular. That will draw people down there, and as people start going down there more for things other than conventions, just to recreate, that will draw more businesses and hopefully some good market-rate housing over time. It’s not going to be easy. And I understand people are frustrated and unfortunately, we do have a tendency in our town to look at the cup half empty. I want people to start looking at it half full and say, how can we make that even fuller than it is?

Ryssdal: Well you know it’s interesting you bring that up because as I said, I was in Erie a couple of days ago talking to a bunch of people around town, and there was an interesting generational divide. A lot of the folks who’ve been in Erie for a long time are very much glass half empty in a four-letter word kind of way that I can’t say on the radio, and the younger people that I talked to actually had some optimism. They were hopeful and I think that generational divide is kind of interesting.

Schember: Yeah, that is interesting. It’s very encouraging to hear that about the younger generation, and I’ve got some access to a lot of them. I can tell you my mayor’s office, the staff I put together, is very diverse which I’m proud of. We have an Indonesian, a new American citizen. We have an African-American. We have a millennial. We have a couple of women. I always say I’m the only old white guy on the team. We’ve also added a new business development officer, a new grant writer and a new city planner. The city of Erie has never had a planner before. We’ve never looked beyond the current year to say, where do we want to be five, 10, 15 years from now? And what do we need to do today to start getting there? So this team, I want to say they formed around me, because these are people that kind of came to me, talked to me over the course of the last year or so. Some of them I’ve known for a lot longer than that, but I feel very lucky to have this team, and I think this team can kind of change the way we look at things from that glass half empty to the glass half full as we start to have some early successes. I’m hoping even the older people, people more my age, will start to say hey, we do have the possibility to move things forward and make the city great again.

Ryssdal: When you go to conferences of small- to medium-size city mayors in this country, as I’m sure you all do, what are you seeing from your peer cities across the country? Because there are thousands of cities like Erie all over the United States.

Schember: Yes there are, and I’ve been in office about a month now. I’ve actually been to one training session where there were other mayors, and that was up at Harvard. That was actually before I took office. But at that particular meeting, I heard a lot of the same things from other mayors from across the country in similar-sized cities: that you’ve got to encourage the private sector to develop and grow. I don’t want to create jobs in government. I want to create good, family-sustaining jobs in the private sector by encouraging them to locate, expand and grow here in Erie.

Schember: I do worry about that. And the same thing exists, to be honest, at at state level here in Pennsylvania, where the Democrats and Republicans just seem to oppose each other no matter what. We have a Republican senator, Dan Laughlin, who I’ve developed a relationship with. In fact, I was in Harrisburg yesterday and spent an hour meeting with him talking about a couple of programs that we might both have interest in trying to propose and move forward. So I don’t care if it’s a Democrat or Republican, any elected official that represents the same people I represent, I want to work with them to help the people and not worry about who’s going to get elected in two or four years from now. That’s the type of politics I hate. You know, I’m not a career politician, and I just wish they’d stop and start talking about how can we make the country better, how can we help our people.