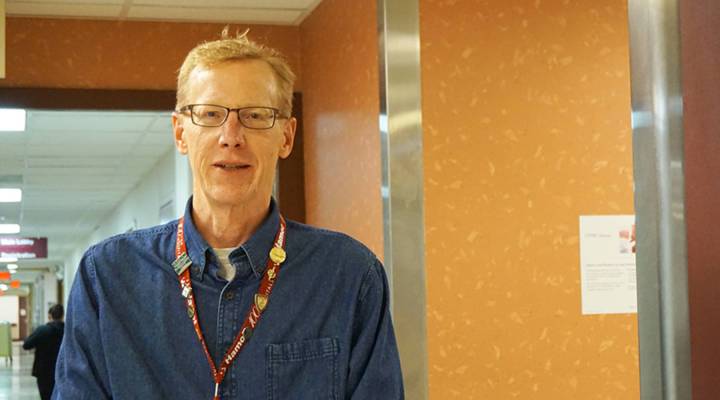 COPY
Health care “is a very, very core thing to the community,” said Marc Bryant, a former paper mill engineer who is now a nurse at UPMC Hamot. Erika Beras
The Big Promise

Like a lot of people in Erie, Marc Bryant spent decades in manufacturing. He was an engineer at Hammermill Paper, which became International Paper. And then the mill closed in 2002. Bryant said some of his co-workers retired. Others, “honestly, ended up on a bar stool somewhere complaining about how things were bad until their benefits ran out,” he said.

And the rest did what he did.

That was 15 years ago. Today Bryant is a registered nurse at the University of Pittsburgh Medical Center Hamot, one of Erie’s two largest hospitals. He said he occasionally runs into guys at the hospital he used to work with at the paper mill. Not surprising, given that health care has become what manufacturing used to be – Erie’s biggest industry.

But Erie didn’t get there on its own.

It had a big assist from Pittsburgh, which is just a couple hours away and brought its own economy back from the brink by turning to health care after the steel industry collapsed.

And when Pittsburgh’s two biggest health care systems — UPMC and Allegheny Health Network — needed new territory to conquer, they turned to Erie, and folded its biggest hospitals into their systems.

Hamot Hospital was acquired by the University of Pittsburgh Medical System seven years ago. Since then, the hospital has expanded and launched specialties.

Competition between the two systems at the time was fierce. But when they came to Erie seven years ago, “that wasn’t really what happened here,” said Scott Whalen, CEO of Saint Vincent Hospital, which is part of Allegheny Health Network.

But it’s happening now. Each system is sinking $100 million into new construction. They’re both offering new specialties. And the doctor poaching is nonstop.

Take Muhammad Asad, a bariatric surgeon. He works at UPMC Hamot, but he used to work at Saint Vincent Hospital. What made him cross the line? The promise of a new assistant in the form of a $2 million robot.

Healthy as in jobs. Erie’s two big hospital systems employ nearly 7,000 people. And then there are the other medical-related jobs created by those jobs. There’s also a medical school and a big insurance industry, not to mention a lot of related nonmedical ones, too, like construction.

Bryant, who made that shift from the paper factory to nursing, said outsiders might think of Erie in terms of manufacturing, but it’s a health care town now.

“I mean, this is a very, very core thing to the community,” he said.

And so far, Erie isn’t paying the typical price for those jobs in more expensive health care.

Paul Ginsburg, director of health policy at the Brookings Institution, said when the big guys buy up the little guys, it doesn’t always end well.

“There’s been an accumulation of research that has shown that hospital mergers raise prices in the community, and as far as whether they improve quality, there’s just no evidence that this happens,” he said. But in this case, “The added premiums that come from more jobs in health care, much of that is paid for by people outside of Erie.”

People like the woman having the weight-loss surgery. Erie is a big draw for out-of-towners in need of specialized medical procedures they can’t get at home. And then there’s that other out-of-towner — the federal government. A big percentage of Erie’s residents are covered by Medicaid and Medicare.

“So, in its narrow interest, a community like Erie does benefit,” Ginsburg said.

But if the Republican health care bill goes through and Medicaid funding is slashed, economists say hospitals could lose those government health care dollars. And that could put a chill on expansion plans and job growth, and bring a whole lot of pain to a community still trying to rebuild its economy.