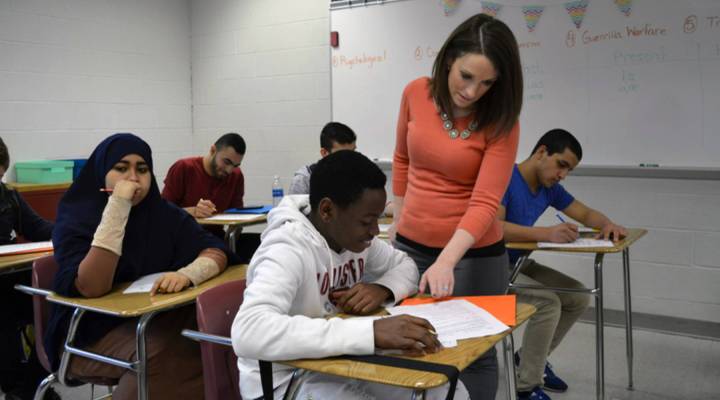 COPY
Catherine Doyle teaches an ESL class at East High School in Erie, where more than a quarter of students are learning English. Amy Scott/Marketplace
The Big Promise

Catherine Doyle teaches an ESL class at East High School in Erie, where more than a quarter of students are learning English. Amy Scott/Marketplace
Listen Now

Here’s how bad things had become for the chronically broken public school system in Erie, Pennsylvania: Earlier this year, Superintendent Jay Badams floated a proposal to close the city’s high schools — all four of them — and pay tuition to send kids to better-funded schools in the surrounding county.

The pushback, Badams said, was intense.

“One of the ones that sticks with me is that, ‘We hope you solve your financial problems. We don’t want your troubled city kids out here in our county schools. Why do you think we moved out to the county in the first place?’ ” Badams recalled. “And some of them were far worse.”

Another guy pulled Badams aside at a hockey game and said city students might be met with guns at the town line.

Badams was trying to make a point. The majority of Erie’s public school students live in poverty, and disproportionate numbers of them have learning disabilities or are just learning English. But, partly due to the way Pennsylvania’s convoluted funding formula works, Erie city receives up to $3,000 less revenue per student than schools in the surrounding county.

“If we’re going to be offering kids an inequitable high school experience, something that’s vastly inferior in terms of resources to what’s available to students outside the city limits, we thought it was an ethical decision,” Badams said.

In the end, the district went with a less radical plan to consolidate its schools, making better use of the space hollowed out from years of falling enrollment. Two high schools will become middle schools, and two elementary buildings will close.

Salih Kabengo, left, from Congo, and Mahmoud Al Hussein, from Syria, both 17, are students at East High School, which is slated to become a middle school next year.

On a recent evening, the district’s chief financial officer, Brian Polito, unveiled the plan to a packed gym at the John F. Kennedy neighborhood center on Erie’s east side. He clicked through a series of charts showing just how bad the crisis is. In the last seven years, the district has closed three elementary schools, cut 350 jobs and pared back arts, foreign language and shop classes.

Even after all that, Polito told the crowd, the district was facing a $10 million budget shortfall.

The consolidation plan still leaves at least another $4 million to cut. Music, physical education, sports — even full-day kindergarten — are on the table.

“Anything that could be considered extra has to be considered, and our board faces some really grim choices,” Badams said. “There’s nothing left to cut.”

A slide prepared by the district compares Erie’s public schools to other Pennsylvania districts.

Beyond the broken funding formula, employee pensions are a big drain. The district also hands over close to 15 percent of its budget to charter schools, which are publicly funded but privately run. More Erie families are choosing charters as an alternative to what they view as failing district schools. Those students are scattered across the city, so the district doesn’t save that much on overhead.

“One of the fallacies of the whole notion of school choice as being away to improve the actual public school system is that when you take resources away from the schools that you’re hoping will compete, you make them less competitive,” Badams said.

If the Trump administration is successful, more school choice is coming. Education Secretary Betsy DeVos is a proponent of charter schools as well as vouchers that help low-income families pay for private school.

“We must shift the paradigm to think about education funding as investments in individual children, not in institutions or buildings,” DeVos said recently at a school choice event at the Brookings Institution.

In Erie, one of the buildings slated to become a middle school is East High, where the flags of 29 countries hang in the school’s entryway, representing 270 students speaking 14 different languages. Erie is one of the country’s top resettlement sites for refugees.

Salih Kabengo, who arrived from Congo last year, is nervous about the switch.

“I feel bad, because I’ll be missing East High School,” he said.

Juanita Stokes is a graduate of East High and the mother of three elementary schoolchildren. She says Erie public schools “always get the crap.”

The grownups are worried, too, and fed up after years of cuts. At the community forum, Juanita Stokes joined other parents lined up at the microphone for questions. Stokes is a graduate of East High and a mom of three elementary school students.

“How come Erie School District is always the first schools to close?” she asked the administrators. “Our schools get the second hand. They always get the crap, and that’s what a lot of parents are tired of.”

Last year the state adopted a new “fair funding formula” that takes factors like poverty and the number of English language learners into account. But it only applies to funding increases, meaning the old inequities are baked in. To avoid the worst cuts, the district is still hoping for last minute-miracle when the state legislature passes its budget this summer.