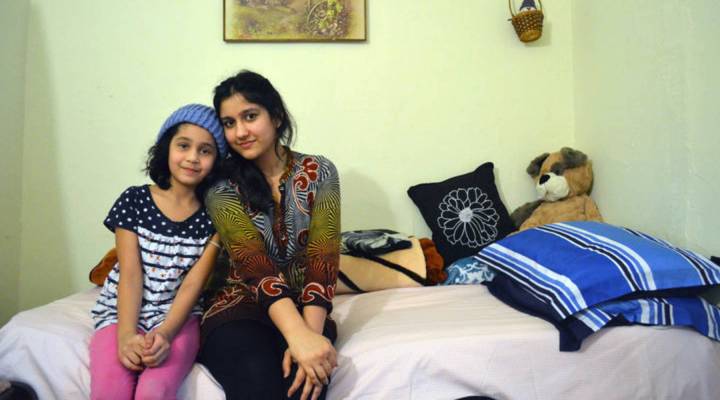 Megha Ghimirey arrived in Erie, Pennsylvania, last May, with her parents and younger sister as refugees from Nepal. The city they left behind, Daka, was crowded and dusty, jammed with motorbikes and trucks. When she got to Erie, she said, the sky seemed wider.

“Everything was so pretty, so beautiful,” she recalled. “It was like a dream.”

Her family spent the summer getting settled and finding the right high school for Megha. Unlike many children in Nepal, she’d gone to school. In fact, her father was the principal.

Immigrants make up about 20 percent of Erie’s population, many of them refugees. Thanks to a resettlement volunteer who could interpret her Nepalese transcript — Megha had the highest test scores he’d ever seen — she got into Northwest Pennsylvania Collegiate Academy. It’s one of the top public high schools in the state.

Megha is wrapping up her junior year, and she moves through the hallways of the palatial building like a natural.

“It’s like heaven inside,” she said. “I feel so good when I come here.”

It wasn’t that way at first.

“I have seen my parents struggling for life, for me, so I want to give them everything that they deserve,” Megha said.

“I thought people were going to judge me because I’m a refugee, or they will try to bully me, or something like this,” she said.

But she fit right in with all the other high-achieving teenagers. She’s taking three Advanced Placement courses — history, physics and chemistry.

Her pre-calculus teacher, Peter Wojciechowski, said when it comes to math concepts, “a lot of them, it seems that she has seen them before, so I have to give her some extra stuff to go a little bit beyond sometimes.”

Math is a universal language. But there is nothing universal about high school cafeteria cuisine. Megha ate nothing but salad for the first half of the school year, her friend Abby Matha said.

“Then just recently she was like, ‘You know what? I’m done getting the little salads. I’m tired of the lettuce,’” Abby said.

“I was feeling dizzy because of those things,” Megha said.

“She’s exactly like me and my friend, but just with a different voice and looks a little bit like not just generic white girl, like me,” Abby said.

Megha’s even got that signature teenage nonchalance. On the way to their table, they barely notice a teacher who’s being duct taped to a pillar. You know, just another fundraiser for prom.

“Sometimes I get shocked, like, ‘Why are they doing this?’” Megha said. “I feel happy, sometimes, like ‘Oh, they are doing this.’”

Prom is not in Megha’s plans. She rarely hangs out with friends.

“I’m just focused in my school, and my parents, my home, my sister and my career, that’s it,” she said.

She has her eye on Stanford, where she wants to study software engineering.

But she’s not all business. After lunch, Megha heads to choir practice, where they’re learning ABBA for a spring concert.

At night, the family makes dinner together in their second-floor apartment. Megha helps her mom with the daal, while her father, Devi Ghimirey, chops ginger.

“Everyone is divided with his own part,” Devi said. “I just always make the curry ready.”

Devi is originally from Bhutan. He fled an oppressive regime in the late 1980s and spent more than 25 years as a refugee in Nepal, where he met his wife, Leela Sharma, before they resettled here. They’re not teaching anymore. She’s a housekeeper at a senior center. He’s working in a factory, making parts for farming equipment.

He’s doing so with the hope that his daughter can start at the top. Devi said his dreams for Megha were nearly shattered when he found out how much college could cost. A year at Stanford, for instance, is well north $60,000. And though there was much talk during the presidential campaign of lowering college costs, they don’t seem to be going anywhere but up at the moment.

Megha is counting on getting a scholarship.

“I have seen my parents struggling for life, for me, so I want to give them everything that they deserve,” she said.

She’ll complete another American teenage rite of passage next month, when she takes her SATs.