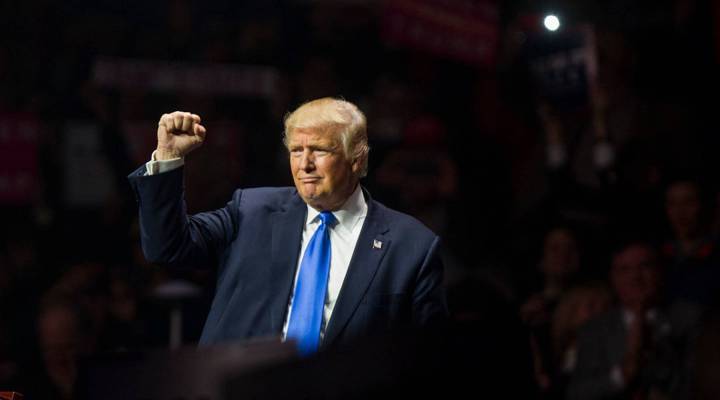 One pivotal topic in this election spoke volumes about voter sentiment — the economic health of our country.

In fact, Donald Trump’s victory may reflect the frustrations — and anxieties — many Americans feel toward how politicians have addressed economic concerns in the past.

His vision focused on stopping foreign trade and immigration, and providing tax breaks. To get an idea of what he will push for in the next four years, let’s revisit some of the policy he delivered during his campaign:

He plans to cut tax rates for everyone, according to his policy. But the benefit of these cuts will end up going to the wealthiest Americans in the form of deductions and credits, according to the Tax Foundation, a conservative think tank. The group estimated that plan would cost the U.S. between $4.4 trillion to $6 trillion over a decade.

Another group, the nonpartisan Tax Policy Center, said some middle-class families would end up paying more because of limits on certain kinds of deductions.

Trump said he will create 25 million jobs in the next 10 years. Experts said this is impossible — we just don’t have enough people; the only way to get to the numbers he’s promising is to increase the number of immigrants.

As part of his job creation promises, Trump has also vowed to keep manufacturing jobs in the U.S. He plans on taxing companies that manufacture products outside the United States but then sell their products to Americans.

Trump’s views on immigration include the much-talked-about wall that he wants to build on the U.S.-Mexico border. He’s been staunch on the idea, but how the government would finance a wall is less concrete.

Trump said previously that the U.S.should withhold migrant remittances until the Mexican government agreed to pay for the wall. But when he met with Mexican President Enrique Peña Nieto to discuss U.S. relations with Mexico, he said the two of them did not discuss who would finance it.

Peña Nieto later disputed this statement,  saying he made it clear to Trump that Mexico would not pay for a wall.

Clinton called for $285 billion toward infrastructure over five years and Trump said he would double that. His plan includes giving private companies large tax credits.

“The tax credit approach is one significant source of funding,” said Peter Navarro, a senior policy adviser for the Trump campaign who helped draft the strategy. “At the other end of the spectrum, you’ve got existing money that comes into all sorts of funds like transportation funds, and then you have bonds that have been sold for specific projects, that will continue to be done.”

“Policies that allow women with children to thrive should not be novelties; they should be the norm,” she said during her speech at the Republican National Convention. “Politicians talk about wage equality, but my father has made it a practice at his company throughout his entire career. He will fight for equal pay for equal work, and I will fight for this too, right alongside of him.”

While he didn’t provide any specifics on how to achieve equal pay for women, Trump’s child care proposal requires employers to give mothers six weeks of paid maternity leave when they give birth or adopt. The payments would come from unemployment insurance system, which means the mother would be paid as if she had been laid off — an amount that is typically a fraction of her usual wages.

The estimated cost of this plan ranged ranged between $2.5 billion to $3.4 billion.