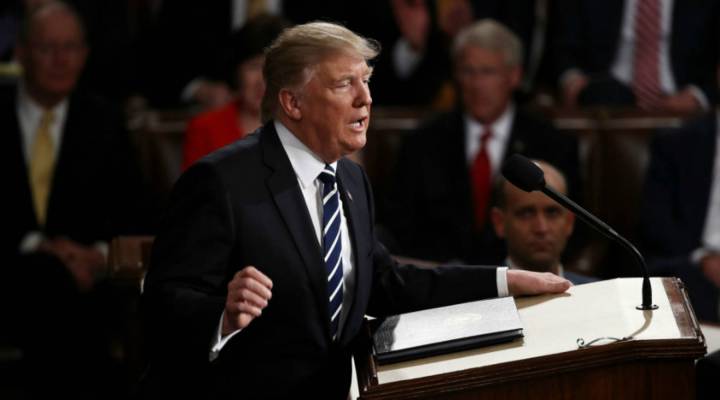 President Donald Trump laid out his agenda to both houses of Congress on Tuesday night, saying he wants to work with them on immigration, health care reform and various economic initiatives.

Many of the economic themes Trump addressed last night echo the promises he made on the campaign trail — for example, his push to create more jobs.

While the speech didn’t provide many new details, it did clarify what his priorities will be. Here are some of the key economic points from his speech.

Trump’s infrastructure plan was a big talking point during his campaign.

In October, his team announced that the private sector would play a role in helping fix America’s road and bridges — a goal that Trump reinforced yesterday.

“To launch our national rebuilding, I will be asking Congress to approve legislation that produces a $1 trillion investment in infrastructure of the United States financed through both public and private capital, creating millions of new jobs.”

Peter Navarro, a senior policy adviser for the Trump campaign, said last year that funding the plan would involve granting large tax credits to these private companies. And it wouldn’t include any new taxes.

While private investment can spur infrastructure growth, it can mean that the projects that get done are the most profitable — not necessarily the most needed.

An end to the Affordable Care Act?

The president also quadrupled down on his promise to repeal Obamacare, receiving a standing ovation from his party.

The administration has made clear that repealing the Affordable Care Act is a top priority. In place of Obamacare, Trump has pushed for a system reliant on Health Care Savings Accounts. In the past, he’s also mentioned that he wants people to fully deduct health insurance premiums from their taxes.

The president laid out five goals on the topic during the speech: guaranteed access to health insurance for those with pre-existing conditions, more tax credits, state flexibility with Medicaid programs,  protection against unnecessary costs, and the ability for insurers to sell plans across state lines.

Business leaders like J.P. Morgan’s Jamie Dimon have said that if Trump puts all his energy into health care, it will likely push other big issues to the back burner. What Dimon wants to see: tax reform, which he thinks will benefit workers.

“We have been driving brains, capital, business and research away from this country,” Dimon said this week. “It’s not hurting J.P. Morgan Chase. It’s hurting the average american worker.”

Tax reform is a key issue for many in the business world. This was another item President Trump wants to put in his “promises kept” column.

“My economic team is developing historic tax reform that will reduce the tax rate on our companies so they can compete and thrive anywhere and with anyone,” he said last night. “It will be a big, big cut. At the same time, we will provide massive tax relief for the middle class.”

There aren’t many details on that tax plan, but it’s expected to drastically cut the corporate tax rate and cut the tax rate for individuals as well. However, many tax economists say the wealthiest Americans will see the most benefit.

New York University professor Lily Batchelder told us that tax cuts for the wealthy could end up being proportionally larger than those for low- and middle-class families. The nonpartisan Tax Policy Center also said last year that middle-class could end up paying more under Trump’s plan because of limits on certain kinds of deductions.

In all, Trump’s plan could cost about $4.4 trillion to almost $6 trillion over a decade, according to the Tax Foundation.